A Future in Composites

Sandwich Plate System (SPS) technology has seen a steady evolution over the past 10 years, with a growing uptake in the commercial marine field as well as in civil engineering. Much of the marine work generated to date has entailed the reinstatement of corroded or operationally damaged structure such as tank tops, ramps, bulkheads and decks, using SPS Overlay. However, recent penetration of the newbuild market is expressed in the adoption of SPS panels in the funnel casings of DFDS Tor Line's new Tor Magnolia-class North Sea RoRo trailerships, ordered f r om Flensburger Schiffbau- Gesellschaft of Germany.

Anglo-Canadian company Intelligent Engineering developed SPS in conjunc- tion with industry partner Elastogran, a member of the BASF Group, and with its licensees. SPS comprises two metal plates bonded to a continuous elastomer core, and is claimed to form a much stiffer and stronger system than a single stiffened plate, precluding local buckling and eliminating the need for closely spaced discrete stiffeners to provide in-plane strength. It is said to make for a simpler structure, and reduces the overall welding requirement.

hi a presentation to the RoRo2004 Conference in Gothenburg, Denis Welch, the SPS Overlay Director for Intelligent Engineering in the UK.

advised delegates that SPS had achieved total references in service on some 34 ships, amounting to more than 30,000 sq. m. in decks, tank tops, bulkheads and funnel casings.

Affording an insight into future scope for the technology in the marine domain, Welch identified a number of newbuild and conversion design projects and studies that were under way.

One of the initiatives relates to a scheme for the "double hulling" of existing, single-hull vessels, by using prefabricated SPS panels to form the inner hull plating. IE has also developed UR S21-compliant SPS hatch covers for panamax and capesize bulk carriers, and is working with industry partners on lightweight vehicle decks for dedicated vehicle carriers. The company is also advocating SPS for the inner hulls and tank covers of LNG carriers, on the grounds of the system's attributes as regards vibration dampening, space saving, and insulation and blast protection characteristics.

Furthermore, Kawasaki's shipbuilding arm and IE are preparing SPS scantlings for the revolutionary Sea Arrow bow. It is anticipated that use of the system will engender a structure able to withstand high impact loads from the sea, while ensuring that the bow collapses in a controlled manner in the event of a collision, so as to minimize damage to both the inflicted and inflictor.

IE has commissioned a study by the University of Strathclyde, to investigate the economics of using SPS in the production of superstructures According to Welch, initial results indicate that labor costs could be cut by over 50 percent by employing prefabricated SPS panels relative to the conventional, all-steel alternative.

Building on the foothold gained with the new generation of high capacity DFDS trailerships from the Flensburg yard, and in keeping with its staged approach with SPS to ship design.

Intelligent Engineering is targeting the RoRo new construction market. The system is held to offer important benefits in RoRo projects as regards the costs of build and ownership, crew and passenger comfort, safety and environmental protection, and space utilization.

More recently, IE announced that Teco Ocean Shipping — following a successful tank top reinstatement on the bulk carrier Gayle Eustace — has elected to use the technology on another of its vessels, the Doris Guenther. Two tank tops with a total surface area of 981 sq. m. was to be overlaid at Chile's ASMAR Shipyard in mid-October. 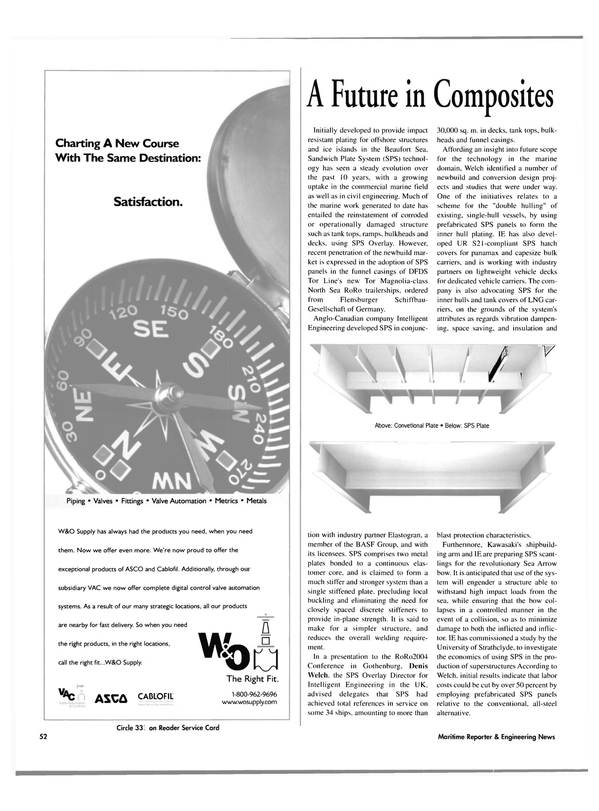 Read A Future in Composites in Pdf, Flash or Html5 edition of November 2004 Maritime Reporter

Other stories from November 2004 issue