As advances in computing power have made marine training via simulator more mainstream, the majority would contend that the most effective training is on the water, at the helm. While training on real-world vessels can be tough due to time and safety constraints, Massachusetts Maritime Academy maintains its unique solutions: the Manned Model Shiphandling Program on the Great Herring Pond.

The Manned Model Shiphandling Program at the Massachusetts Maritime Academy is unique in that it is only one of a handful in the world to offer mariner’s hands-on training courtesy of professionally built, scale models of real-world ships. But it is solely unique in one very important way.
“Ours is the only USCG Approved Manned Models course in the world,” said Captain Michael R. Burns, Jr., Director, Massachusetts Maritime Center for Maritime & Professional Training. “Students seeking to upgrade their license to a senior level can perform many of the practical assessments they need for an upper level license while attending this course.”
The Manned Model Shiphandling Program uses its fleet of four ‘ships’, including three single screw vessels and the new twin-screw tanker Boston. While the manned model program does have some limitations: namely the window of operation in the Northeast United States is middle of April through late October, and of course Mother Nature. “One of the biggest advantages is also one of the biggest drawbacks,” said Burns. “We are completely dependent on the weather.  The models cannot operate in wind over 20 knots, lighting and heavy rain.”
He explained that wind affects models at a 2x scale up to 20kts, and 4x at more than 20kts, meaning that an actual 10 knot wind affects the models as a 20 knot wind affects an actual ship.  When the wind increases to over 20 knots it affects the models the same way an 80 knot wind affects a ship. But it is also those very factors that make the program a vital instructive tool. According to Burns, in the last eight years only two course have been cancelled due to weather. But it is the weather itself which makes the training that much more valuable versus simulated reality. “A student seated in an actual waterborne model can feel the vessel beneath them as well as all ambient weather conditions,” Burns said. “Students must cope with whatever weather conditions are present that day, just as they would on an actual ship.”
In addition to a closer ‘real-feel’, Mass Maritime Manned Model Shiphandling Program offers something perhaps just as valuable in the mariner’s ‘time is money’ reality. “Time is compressed when using scale models, and in our case, by a factor of 4:1,” Burns said. “For example, docking evolution that would require an hour on an actual ship takes about 15 minutes on our models. Because of this phenomenon, students can accomplish many more evolutions per day than in a simulator.”
According to Burns, a growing number of our students are coming from the offshore industry where they may not have the opportunity to do much shiphandling, especially on vessels such as drill ships.  “Our program provides these students with an opportunity to practice techniques that they may not otherwise get to perform in the regular jobs.  They can also obtain many of the assessments that they require for license upgrade in our five-day class that they would otherwise need to spend 10 days in a simulator for.”
While Mass Maritime certainly counts its unique Manned Model Shiphandling Program as a feather in its maritime education cap, it is fully cognizant and supportive of the need for simulation technologies to produce a well trained mariner. When conditions keep its vessels in ‘port’, training is switched to MMA’s new Transas 360 degree Full Mission Ship Simulator and Tug and Tow Simulators that are available as back up for days that we are unable to use the models due to weather.
www.maritime.edu/cmt
Email: cmt@maritime.edu

(As published in the March 2013 edition of Maritime Reporter & Engineering News - www.marinelink.com) 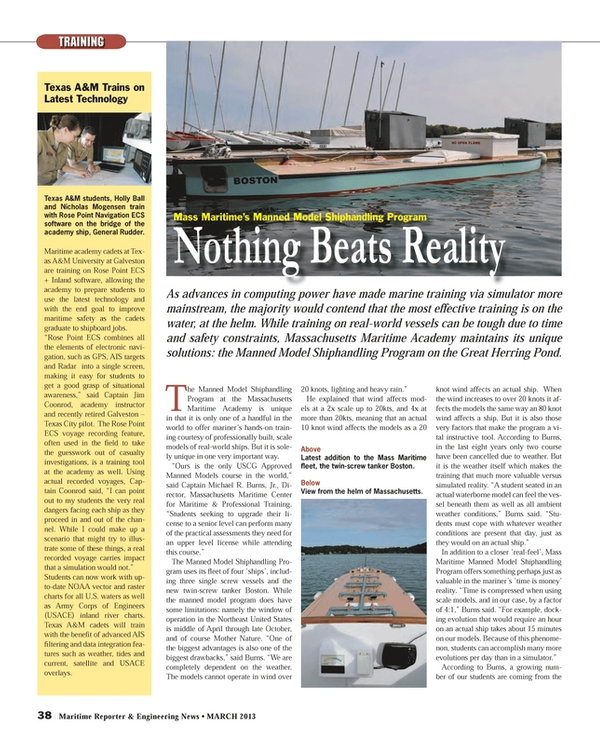