The opening of the base last month in Singapore was touted as a milestone event for the maritime and oil and gas industries in the Asia Pacific region, as it brings together personnel and equipment resources in a single place, designed to deliver an integrated, swift and effective response to an emergency oil spill incident. A feather in the cap, so to speak, of the base centered on the arrival of the advanced subsea well capping equipment, the capping stack, which can be mobilized throughout the Asia Pacific region in the event of a subsea well control incident.
“Staying true to our mission to respond to oil spills effectively and efficiently anywhere in the world, the Loyang base forms an important link in our global network of response bases and is a strategic launch pad from which to deliver our response, preparedness and subsea well intervention services to our members and stakeholders in the region,” said OSRL Chief Executive Robert Limb.
Located within a dedicated oil and gas supply facility with wharf access and in proximity to key airports, the new base is strategically placed for OSRL to mount an emergency response either by air or sea, thereby offering a range of viable response delivery options during an emergency spill incident.
“OSRL is a global organization that provides members with resources to prepare for and respond to oil spills,” said Limb. “OSRL’s history in Singapore goes back to the 1990s when it assisted in the establishment of EARL (East Asia Response Limited) in 1993. EARL was a Tier 3 organization focused on preparedness and response in the Asia Pacific region. EARL and OSRL merged in 2007 to form Oil Spill Response and East Asia Response Limited (OSRL/EARL). The company was renamed Oil Spill Response Limited (OSRL) in 2009. In recent years, OSRL has responded to major oil spills in Singapore, Malaysia, Korea, Pakistan, India and Australia from the Singapore Base.”
According to Limb, the Tiered Response concept of planning for oil spills focuses on how the global oil industry provides resources to respond to an incident.
“Under this concept, there are 3 tiers of response planning,” Limb said.
•    Tier 1 refers to having equipment on site to deal with minor operational spills.
•    Tier 2 means having access to in-country resources, both personnel and equipment, that are shared under a form of mutual aid agreement by the different companies working in the country and which provides for access to the resources in an emergency.
•    Tier 3 is designed to provide additional expertise and resources in the event of a major spill, either in terms of volume or complexity, which cannot be managed with available Tier 1 and Tier 2 resources.
“Members use OSRL to support their Tier 1 and Tier 2 resources in the event of an oil spill,” Limb said. “OSRL has one of its Tier 3 bases located in Singapore due to the high volume of shipping traffic transiting the Straits of Malacca as well as its logistic infrastructure and proximity to other countries in the region.”
OSRL, like other organizations in its genre, is constantly evolving and investing to ensure it stays up-to-date and relevant to the needs of its members.
“Since Macondo, industry has significantly strengthened its capability in offshore well design and operation, well intervention and oil spill response,” Limb said. “From an OSRL perspective, we are seeing more precautionary mobilizations and extended times on location during an incident. There is greater depth in contingency planning as Members seek to ensure they have access to a wide range of resources both in-country and internationally.”
“In this region, we have strengthened our response capability by increasing the number of dedicated oil spill responders stationed in Singapore to 30 and invested heavily in responder training and exercise especially in new skills sets such as shoreline assessment, incident command and modelling technology.
In May, we commissioned a subsea well cap that can be mobilized in the event of a well control incident. The cap can be deployed to water depths of up to 3,000m. We are also working closely with other response organizations, sharing experiences and knowledge as well as developing protocols to work collaboratively in the event of an incident in the region.”

The New Singapore Base
In addition to its strategic location, its expanded size of 9,500 sq. m. comprises a storage area for response equipment and dispersant, a dedicated warehouse for subsea well intervention equipment, a state-of-the-art Emergency Operations Center, an in-house training facility and office space for 100 staff.
OSRL’s integrated subsea well intervention system includes four capping stacks to shut in an “out of control” subsea well, plus two hardware kits to clear debris and apply subsea dispersant at the wellhead. It is suitable for the majority of known subsea wells in the Southeast Asia and Australasia region and can be deployed in water depths up to 3,000m.

After graduating in Chemical Engineering from the University of Exeter, Robert joined Dresser Atlas in Houston as a Logging Engineer in 1980. On completing his initial training, he worked in the U.S., Middle East and the North Sea. On moving into management, Robert held various positions in operations, sales and senior management within the U.K. In 1990 he moved to Stavanger as Country Manager for Norway being responsible for Western Atlas’ operations in Scandinavia and Northern Russia. In 1994 he moved to Singapore as Vice President Asia/Pacific responsible for all operations in that region. Following the acquisition of Western Atlas by Baker Hughes in 1988, Robert moved back to Houston as Vice President of Global Operations responsible for the Worldwide Operations, Manufacturing and Marketing for Baker Atlas. In 2003 he was promoted to Vice President of Sales for Baker Hughes being responsible for the Company’s Sales and Marketing, Integrated Services and Corporate Communications.
In 2005, he left Baker Hughes and joined Vetco Aibel and following the sale of Vetco to GE in 2007, was promoted to President of Aibel Holding being responsible for the Company’s international operations. In 2009 Robert left Aibel and joined Total Safety Inc. as Senior Vice President International Operations.  After the successful sale of the Company to Warburg Pincus, he left Total Safety and was recently appointed CEO of OSRL.
In commenting on how the business of oil spill response has changed most dramatically in his career, Limb had this to say:
“Over the past 25 years the number of maritime incidents has fallen significantly with the introduction of double hulled oil tankers and improved navigation systems. The few maritime incidents that have occurred in recent years are primarily caused from bunker fuels. Since the Montara and Macondo well incidents, we have seen a significant investment by the Oil and Gas industry in the prevention of oil spills and improvement in the scope and breadth of oil spill contingency plans. For OSRL this has meant a significant investment in people providing more specialist skills. The biggest change over the past several years is the need for more resources; the most significant is a tenfold increase in the number of personnel. What has not changed is the dedication and commitment of all the people who work for OSRL.”

(As published in the July 2013 edition of Maritime Reporter & Engineering News - www.marinelink.com) 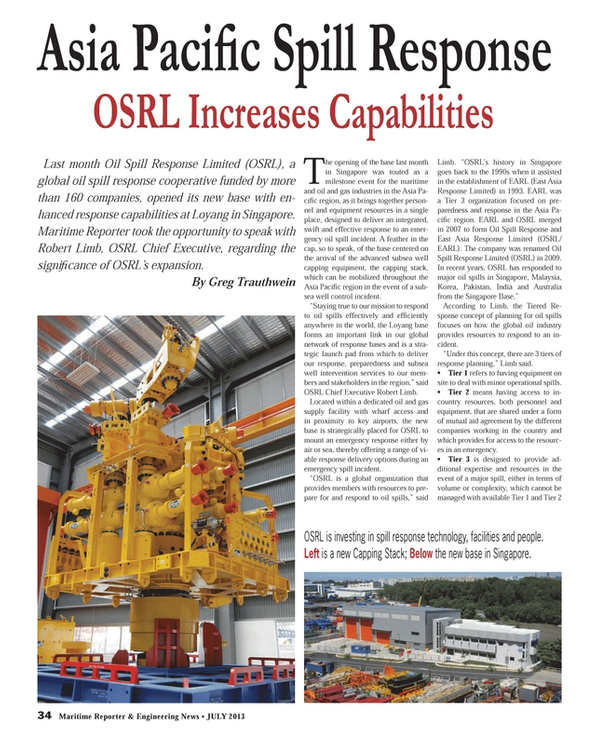