The Caribbean is a complex maritime environment, with multiple countries and territories, significant seaborne commerce and a wide variety of threats to safety, security, stability, the environment and sovereignty.  A diverse group of stakeholders gathered in Providenciales, Turks and Caicos Islands (TCI) to discuss those challenges and reaffirm their commitment to address them.  A major theme throughout the conference was that partnerships and collaboration are important to achieving maritime security in the region.
Maritime Security Caribbean 2013 was hosted by Homeland Security Outlook and held at the Beaches Resort on Providenciales.
The conference was opened by Peter Beckingham, the governor of the Turks and Caicos Islands, an independently governed British overseas territory located south of the Bahamas and north of Haiti and the Dominican Republic.  Beckingham acknowledged the substantial maritime security risks of drug and human trafficking and illegal immigration for the TCI.  “There is a huge vulnerability about these islands.”
“Maritime security is an ongoing concern for our government.  We have lots of beaches—ideal landing areas for trafficking of drugs, humans and firearms, and the removal of endangered or introduction of invasive species,” said Ricardo Don-Hue Gardiner, the TCI minister of border control and labor.  Gardiner.  “We have a fundamental responsibility to do the very best we can to protect our people and our visitors.  No vessel should reach our shores undetected and without scrutiny.”
Among the major challenges to maritime security are illegal landings sloops packed with people who did not go through proper entry process, Gardiner said.
According to Gardiner, the number of illegal migrants who were interdicted was about 900 in 2012, and is on track to be higher this year.  “It could reach the equivalent of four percent of our population this year.”
“We have 40 islands and cays, and they’re all pretty small, so it’s challenging to manage all the borders in a really effective manner,” said Colin Farquhar, commissioner of the Royal Turks & Caicos Islands Police Force.  The Ministry of Border Control and Labour commissioned a coastal radar station in September 2012, so now we have the ability to respond to targets of interest with a high degree of precision.  And so for that we need a different type of vessel.  We’ve had to kind of re-look at what kind of vessels do we need in order to respond to targets of interest.”
Because of the radar system, many of those sloops and other vessels have been detected, and their illegal passengers processed and repatriated.
Technology, and in particular a high-resolution surface surveillance radar, is improving the ability of TCI authorities to monitor local waters and respond to potential threats.
“Traffickers are constantly changing techniques, and do not have to work within the rule of law,” said Larry Covington, law enforcement advisor for the British consulate in Miami.  “We in law enforcement must work within the rule of law.”
In addition to drugs and human trafficking, Covington said there is also an illegal trade in firearms, and that corresponds with an increase in violent gang activity.  “We do not manufacture fire arms in the countries of the Caribbean.  But they’re here, and they’re being moved by sea.  And they’re being used by the wrong people.”
According to Rodman Johnson, radar supervisor for the TCI, the radar has not only helped detect illegal traffic, but it has also helped with navigational warnings and help to render assistance to more than 30 vessels in distress. Of major concern to the TCI are hard-to-detect sloops from Haiti.  The Haitian sloops are 30- to 35-ft. wooden boats, usually loaded with people and low in the water.
There have been sloops with more than 200 people aboard.  Some have masts, but some do not.  Some have motors, but many do not.  They are carried by wind and currently, often at a speed of just a couple of knots.  The sloops are a sharp contrast from the “go fast” boats used in other smuggling operations that can reach speeds up to 60 knots.
Jim Moore of Terma North America says the Terma Scanter 2001 radar at Providenciales demonstrates the value of a high-resolution radar to detect small, “non-cooperative” targets in harsh weather and sea state conditions.
The U.S, Coast Guard is committed to the Caribbean and has a visible presence in the area.  “We always have a medium endurance cutter on the north coast of Haiti.  If we leave, or there is a rumor we will be away from that area, there is an increase in traffic,” said U.S. Coast Guard LCDR Doug Jannusch assigned to the U.S. Embassy in Nassau, Operation Bahamas and Turks and Caicos (OPBAT) is the cork in the bottle.  “If we remove the plug, the area will fill back up with drugs.”

Underway with the Turks and Caicos Islands Marine Police
Now that the TCI has a very effective high-resolution surface surveillance radar, the TCI Marine Police has been able to change its tactics and improve their effectiveness and efficiency.  Today the Marine Police can rely on the TCI’s coastal surveillance radar to alert them to a potential threat, and dispatch a smaller, more economical boat to investigate when needed. The Royal Turks and Caicos Island Police Force Marine Police also have a twin-engine aircraft for surveillance purposes, but there currently is no way to combine the radar picture with what the boats or aircraft are seeing, nor is there an integrated picture at Marine Police HQ to provide for better command and control of all assets.
Maritime Reporter joined Sgt. Glenroy Mitchell and Constable Danneri Belliard on a daytime mission underway along the south side of Providenciales island, over towards West Caicos and then down to French Cay, before returning to the Marine Police headquarters at South Dock.  According to Inspector Everet Warrican, the Marine Police have crews in Provo and Grand Turk.  Three boats are based at Provo, including the new Sea Protector, equipped with three 300-hp Mercury outboard engines.  Belliard, Sea Protector’s coxswain, says the boat can achieve speeds up to 60 knots, with a cruising speed of 30 knots at 3,200 RPM.
The weather was good; the skies clear and the Caribbean calm.  It is not always this way.  “The real challenge is being at sea in poor visibility at night,” said Mitchell. Belliard said the area is great for whale watching, especially when the humpback whales arrive to have their young. Poaching is a problem, Mitchell says.  “They take anything they can get; anything that moves in the water or on the bottom.  They’re spearfishing for Grouper or pulling up lobsters.  The lobster season is closed.  Anyone out here now taking lobster is doing so illegally.”
Some mother ships come up from Haiti and the Dominican Republic and put a number of small boats in the water.  A common practice it to pour bleach into the reef to get the fish to come out and be caught.  That not only destroys the fish, but it kills the coral and other marine life.
“We used to go out for 24 hour patrols just before sunset,” says Mitchell.  ”We’d drop the anchor around French cay, 16 miles south of Providenciales, and wait, and we would hope to see anyone one who may be out here doing something illegal.”
“Three years ago, our style of patrolling or policing this area was different than it is now,” said Police Commissioner Farquhar. “We would take one of our larger blue water vessels south to French Cay and wait there.  Just having a boat waiting around French Cay is a shot in the dark.  Now we can be in Providenciales and rely on the coastal radar to assist us, and respond with a quick response vessel.”
“Since the radar became operational, we go out when we have something to investigate,” said Mitchell.
We arrive off French Cay, where we see several fishing boats and a few dive charter boats with tourists from Provo’s many hotels.  There’s also a wreck to the southwest of French Cay, a reminder that these waters can be treacherous. Uninhabited French Cay is a low sandy island with some scrub vegetation, and a navigation aid to keep boats from running aground.  The island seems deserted in November, but Belliard says it is alive with birds in January and into May when the albacore and other tuna are nearby, and churning up the schools of flying fish, leaving the birds to help themselves to what’s left.
The Marine Police like the advantage that their radar provides.  “If you try and do something illegal now, you’ll be spotted,” said Mitchell. 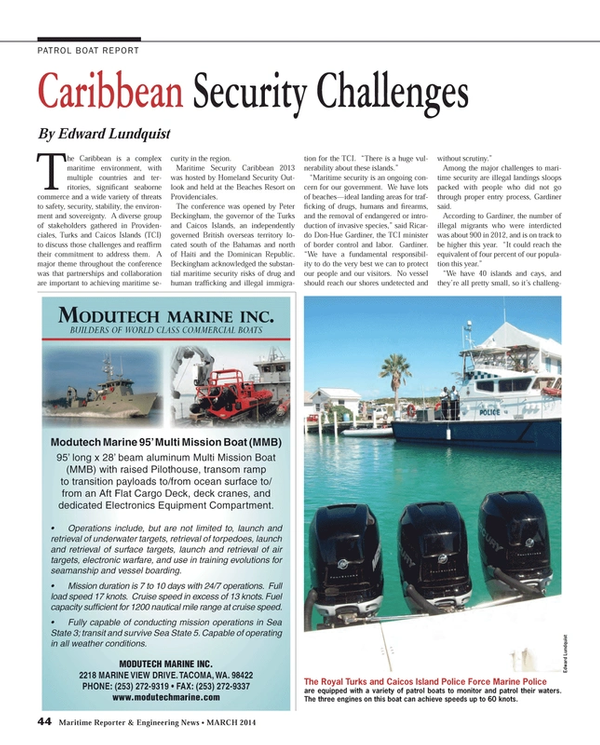