Every year there are countless books written about leadership and management, supplemented by a mountain of similarly themed magazine articles and scholarly treatises, eagerly snapped up by legions of wanna-be bosses and officers. As a culture, we are obsessed with leadership, especially leaders as heroic figures, and we are constantly seeking the right formula to make us so.
But all those would-be captains of industry – and the oceans – might find it a lot easier to step away from the stacks and take a page from a leader extraordinaire, retired Admiral and former Commandant of the Coast Guard, Thad Allen.
If ever two phrases seemed synonymous, they are Thad Allen and crisis management, probably because Leadership – with a capital “L” – is synonymous with the man himself.  Even better, Allen, who has master’s degrees in management and public administration, has a pretty down-to-earth take on what constitutes leadership, and what crisis management is all about.
The 65-year-old Allen likes to call himself an “accidental Admiral,” but there is no mistaking his gift for leadership or his management skills. In those arenas, he’s a rock star without peer – generally seen as, well, a rock – steady, approachable, intensely organized and on top of every aspect of the issue at hand. A “fixer” for two presidential administrations, a former aide likened him to “a steady force in turbulence.”
He’s just a “hyper competent person,” sums up former White House adviser David Axelrod, now the director of the Institute of Politics at the University of Chicago.
“He’s just a proven commodity,” retired Adm. James M. Loy, Allen’s one-time boss, told the New York Times. “He is a very strong, willful, effective, no-nonsense kind of leader. If the challenge is to take the hill, you get behind him and take the hill.”

Five-Star Results in Disaster Control
The straight-talking career “Coastie’ has compiled an astonishing record of success - collecting a sterling reputation for competency and trustworthiness to go along with  it – when it comes to managing the aftermath of disasters of unimaginable scope: a devastating earthquake in Haiti,  a 100-year hurricane and extreme flooding in Louisiana and Mississippi, and for good measure, the worst environmental disaster in the country’s history - The BP Deepwater Horizon oil spill in the Gulf of Mexico. Along the way, Allen has overseen the cleanup of smaller oil spills and was tasked with securing ports up and down the eastern seaboard following the 9/11 terrorist attack in 2001.
After almost 40 years, Allen has the leadership thing down cold. Much like the man, his views on the skills every leader needs, are neither complicated nor shrouded in the management buzz words of the day. But they are easy to understand and adaptable to every-day business situations: flexibility, agility and curiosity.
Underlying everything is patience. Without it, he’d have never have been able to effectively navigate the interagency territorial and political squabbles that seem to engulf every incident where missions overlap. His ability to listen enabled him time and again to find common ground between warring factions, and get everyone focused on the same goal – what he calls “unity of effort.”
“If I was confronted with a multi-stakeholder nightmare, Thad Allen is the guy I would want to have put in charge of coming up with the solution that would keep the stakeholders engaged, participating and focused on the chore at hand,” says Loy, now a senior counselor at the Cohen Group in Washington.

“The status quo is an oxymoron”
With patience in his pocket, the foundation pieces of Allen’s leadership style are accepting that change is constant – that “the status quo is an oxymoron” - and adapting; listening to diverse voices; being transparent; and continually learning. Allen often points out that when it comes to dealing with change – resistance is futile. The better tactic is to accept it, look ahead and develop strategies to deal with it and make it work to the benefit of his personnel and the public he serves. All of which fits into his mantra that “great leaders are great learners.”
Take social media and the 24/7 news cycle. Allen notes there will never be another major event in the country that won’t involve public participation. He is said to be the first of the military branch commanders to launch a blog, iCommandant, for the purpose of daily communicating with his organization, further enhancing what he calls his transparency.
Part of his legacy will be the complete overhaul of the Coast Guard’s aging command and logistics organization, which brought it into the digital era. As he told Congress during his nomination hearings,” We are nothing without our people, and our people cannot be effective without the right tools.”
“Twitter, smartphones, blogs, anything that allows people to aggregate and produce social effects when they are not in each other’s presence – in my view have fundamentally changed our lives,” says Allen [See Q&A Page 32].  It’s critical for leadership to understand the day’s technology, how it is changing and that it must evolve with it. Technology and social media have to be managed, and used as tools to present your message and to keep people informed, because the public is going to be using those tools, and that participation can significantly disrupt the team’s “unity of effort” - as Allen found out most especially during the BP Oil spill.

Job No 1 – Not as obvious as it seems
In a crisis situation, Job 1 is figuring out what the actual problem is, according to Allen. It might not be what it seems. Allen is fond of explaining that everyone went into Katrina thinking the problem was the hurricane. Once he realized that the flooding and lack of government had become the issues, he completely changed his approach and priorities to the betterment of the operation. Only after pegging the problem, he believes, can you effectively lead change by then getting everyone on the same page, committed to the same values, working toward the same goals.
As he explained in a widely cited interview with the Harvard Business Review, “You have to understand at a very large, macro level what the problem is that you’re dealing with, and what needs to be done to achieve the effects you want, and you have to be able to communicate that. You also have to create a set of shared values that everybody involved can subscribe to.” Part and parcel to that effort is transparency and communication. It is critical, he said, to “lead from everywhere.” That means being visible, open and available – to the public, the press and the team. If it doesn’t involve safety or security, Allen’s going to communicate it. It means being the public face of the effort and taking responsibility from the get-go, letting the unified team on the ground do their jobs.  It’s how you win trust.
Time magazine, which picked Allen as one of “The People Who Mattered” in its Person of the Year issue for 2010, said he “ . . . was a rare reassuring presence in the troubled federal efforts to control the Gulf oil spill.” Noting that no one “came out of the spill clean,” it said Allen, who was also a very visible presence, running almost daily press conferences, made out better reputation wise than most.

A New Coast Guard in Town
When not knee-deep in horrific calamities, Allen busied himself modernizing, upgrading and re-focusing an understaffed, perennially underfunded, multi-missioned agency. “While the character and nature of our service are clear, our  missions are not static. . . my enduring goal will be to lead a Coast Guard that is steadfast in its character but adaptive in its methods,” Allen told a senate hearing on his nomination.
Putting his leadership rules into action, Allen accepted the things he seemingly could not change – budgets, personnel numbers and being pulled in multiple directions – stepped into the job ready to look hard at where the agency was, and where it needed to go. With that in hand, he rammed through requests to upgrade the Coast Guard fleet, de-cluttered an unwieldy chain of command, brought everyone back to the same set of goals and focus, and gave his people in the field the training, tools and authority needed to assess risk, prioritize missions and act. He also cemented a relationship with the Department of Homeland Security – the agency he considers to to be the best fit yet for the unusual amalgamate that is the Coast Guard – partly military, partly public, multi-dimensional, and always on call.
Now retired from active duty, Allen is leaning heavily on that experience at Booz Allen Hamilton, working to craft “big-picture” national approaches to homeland defense and disaster response protocols and policy.
“Thad’s 40 years of experience in critical operational missions . . . allow him to provide a unique perspective on how government agencies must evolve during the next decade,” said Booz Allen’s Chairman, Ralph W. Shrader.
That experience has convinced Allen that the country needs to run regular national drills to update what we learn from each disaster and to generally keep in practice.
There’s no telling what form the next disaster will take, but we can be sure of several things – there will be many more emergency situations, they will require intra-agency cooperation across local, state and federal levels, and whatever the policy is, it will need to be open to the public, focused on unity of effort, and communicated across all available channels. And if somewhere in the middle, there is an unflappable, straight-shooting, calm and communicative presence - a next-generation Allen with his or her hand on the helm, then it’s a good bet, that recovery is assured. And should Allen get the call for another disaster recovery assignment? Allen jokes he’d like to be there before the event starts. Now that’s preparedness! 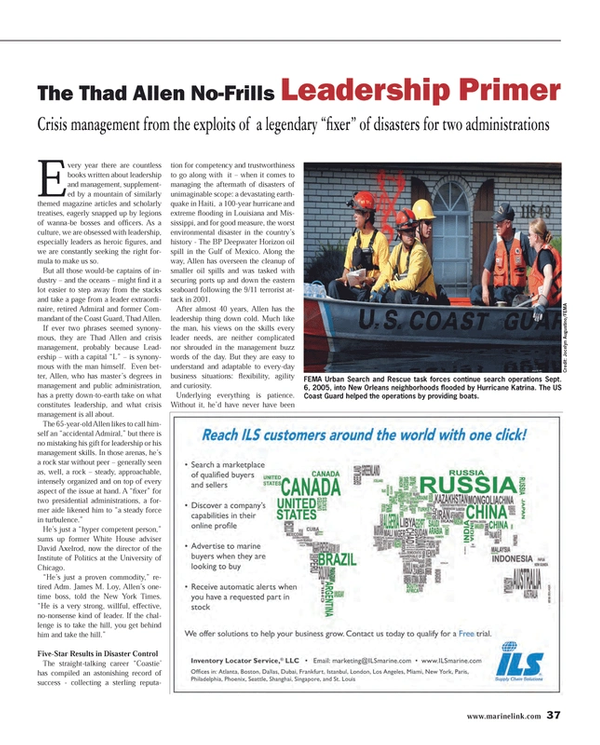