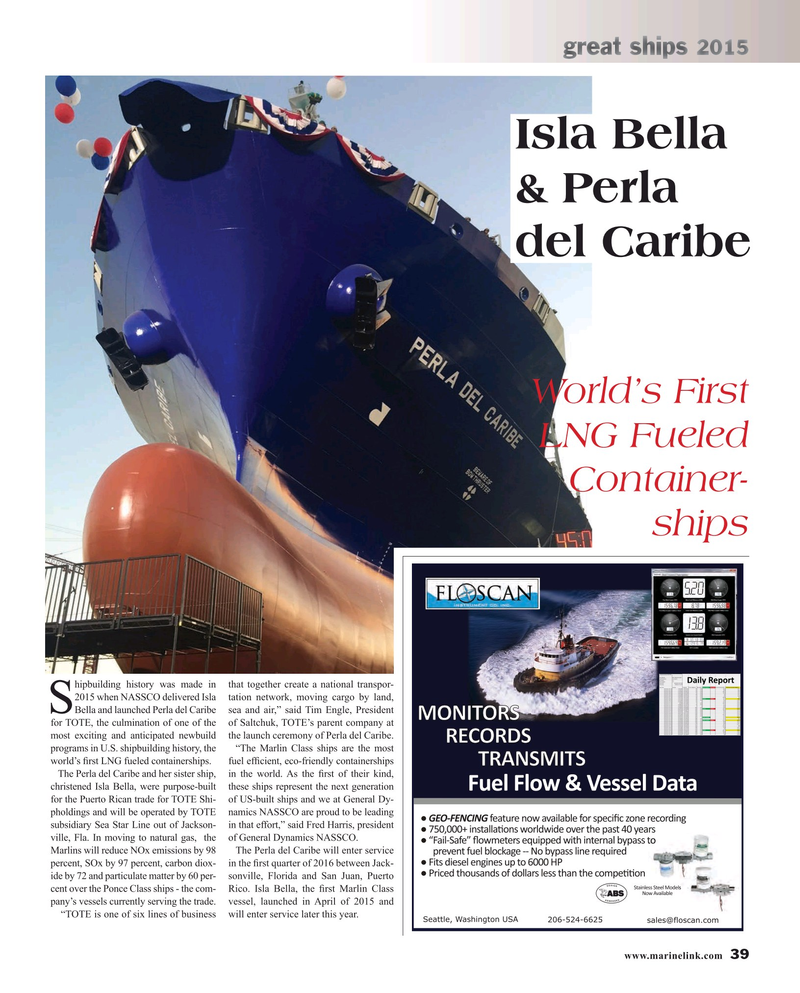 Container- ships hipbuilding history was made in that together create a national transpor- 2015 when NASSCO delivered Isla tation network, moving cargo by land,

SBella and launched Perla del Caribe sea and air,” said Tim Engle, President for TOTE, the culmination of one of the of Saltchuk, TOTE’s parent company at most exciting and anticipated newbuild the launch ceremony of Perla del Caribe. programs in U.S. shipbuilding history, the “The Marlin Class ships are the most world’s ? rst LNG fueled containerships. fuel ef? cient, eco-friendly containerships

The Perla del Caribe and her sister ship, in the world. As the ? rst of their kind, christened Isla Bella, were purpose-built these ships represent the next generation for the Puerto Rican trade for TOTE Shi- of US-built ships and we at General Dy- pholdings and will be operated by TOTE namics NASSCO are proud to be leading subsidiary Sea Star Line out of Jackson- in that effort,” said Fred Harris, president ville, Fla. In moving to natural gas, the of General Dynamics NASSCO.

Marlins will reduce NOx emissions by 98 The Perla del Caribe will enter service percent, SOx by 97 percent, carbon diox- in the ? rst quarter of 2016 between Jack- ide by 72 and particulate matter by 60 per- sonville, Florida and San Juan, Puerto

ASSESSED pany’s vessels currently serving the trade. vessel, launched in April of 2015 and “TOTE is one of six lines of business will enter service later this year.