Bouncing over the waves at a speed of 43 knots, the director of the Defense Materiel Organization (DMO) Vice Admiral Arie Jan de Waard, and MARIN’s director Bas Buchner, made the first test voyage on the moving ‘Fast Small Ship Simulator.’ This FSSS is built by MARIN and SME partners, Cruden and TreeC, as part of a CODEMO project to stimulate the development of a prototype. Vice Admiral De Waard felt the test was very realistic and said: “You feel as if you are involved in a complex operation at sea. Virtual reality like this is going to play a large role in education and training.”

Detailed Replica RHIB Console
A unique knowledge combination led to the FSSS, which is made up of a motion base, typically used for racing car simulations (Cruden), real-time simulation of ship dynamics (MARIN) and an advanced visualization environment (TreeC). The main goal of the FSSS project is to provide a safe but accurate environment for training drivers and navigators of Rigid Hull Inflatable Boats (RHIBs). The motion platform has been outfitted with a near exact representation of the control console of the actual RHIBs used by the Royal Netherlands Navy. This includes engine controls, VHF radio and a GPS system. Even the seats of the driver and navigator are exact copies of the actual seats.
To facilitate simulation of fast RHIBs, MARIN extended its simulation framework (XMF) with a new approach to simulate complex phenomena such as slamming, capsizing, surf riding and broaching. The main challenge was to develop a method capable of simulating such complex motion dynamics while at the same time providing predictions in real-time, including the effect of control inputs by the operator. A balance had to be struck between ‘accurate enough’ and fast computation times. The method also had to be robust to cope with a wide variety of possible conditions and inputs, and also provide realistic motion predictions at all times.
XMF
Based on recent experience a computational model was built up from the ground within XMF consisting of a number of key building blocks. A module was developed based on added mass planing theory (or ‘momentum theory’) as was pioneered in the 1930s by Von Karman and Wagner. Experience from recent research in the DROPSIM tool development program into modeling the impact of free falling lifeboats into the water surface also contributed. In this approach the ship is split into a number of 2D transverse sections and the impact force of each of the sections is determined based on the impact velocity and wetted shape of each section at each time instant. The method is based on first principles and proves to be very adequate in dealing with both planing in calm water and impact forces on fast vessels in waves. Another building block deals with the hydrostatics and wave forces, computed on the actual submerged geometry. The resistance was also modeled as a function of ship speed and actual submerged wetted surface. A detailed engine model is included to simulate the dual Z-drive setup, including the effect of trimming the Z-drives. A coefficient-based maneuvering model to cope with the horizontal plane motions and additional damping coefficients complete the model.
Navy Input
An important step in real-time simulation is the tuning of the various components and coefficients in the underlying computational building blocks. For the FSSS project, MARIN made use of the know-how that it has been building up over the past years about small, fast craft and RHIBs. This includes various model tests with fully remote controlled models of high-speed small craft in the Seakeeping and Maneuvering Basin and the development of advanced computational methods such as PANSHIP.
In the development phase of this project, RHIB instructors from the Royal Netherlands Navy were invited to give their feedback on the behavior of the computational model in combination with the motion system. During various workshops, the instructors have been testing every aspect of the simulator, including steady trim in calm water, steering and throttle response, turning circle diameters, the roll angle during turning and the motion behavior in waves from every direction. Even aspects like the forming of spray on the visualization, friction between the RHIB and vessels during boarding operations and the engine sound were discussed and improved. This approach makes this project truly unique, resulting in a valuable simulation and training tool for operators of RHIBs and other fast small craft.
(As published in the March 2017 edition of Maritime Reporter & Engineering News) 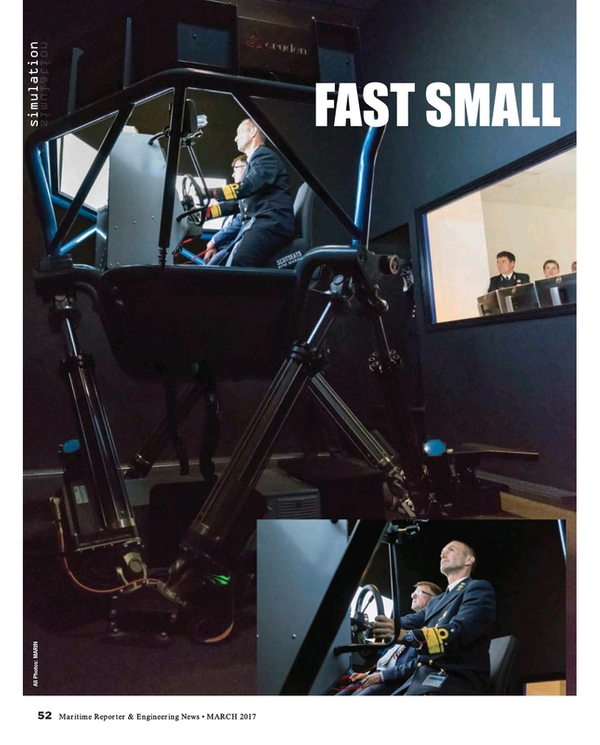