While China has steadily built shipbuilding market share, cruise ship construction –  more specifically mastering the logistical complexities inherent in cruise ship design, outfit and construction – has proved elusive. But it appears that Chinese shipbuilders have turned the corner, with contracts signed for the first cruise newbuilds. We were in Tianjin, China, earlier this year for the 4th Annual China Maritime Finance Forum for a look behind the covers of passenger vessel in China, present and future.

“Here in China we saw an unbelievable opportunity, as it is a country that has the intention, the interest and the resources to develop its market for passenger vessels,” said Carlos H. Reyes, Tillberg & Reyes Group Co., Ltd. “The largest cruise lines are expanding in Asia, and there is a need for cruise ship building, ship repair and refurbishment in China.” Reyes is a partner with Tomas Tillberg in one of the world’s foremost design houses serving the global cruise market, but the organization’s endeavors span far beyond design, as it operates a subsidiary based in Shanghai, China, which is can help guide cruise vessel owners from start to finish, with insight and experience in tapping the emerging Chinese maritime finance market to hands-on contact and full project management with the yard to ensure that the hotel operations and interior outfit are completed to world class standard. “First and foremost, from the owner’s perspective, is proving that the production is world class (in China),” a process that, in Reyes’ estimation, is neither short nor straight.

“We started coming to China to understand the market, we started visiting and establishing relationships with the shipyards, understanding their plans for the future for passenger vessel construction. They have a clear vision for the passenger vessel market  – they understand the increasing (cruise demand) in China, as Chinese have developed a ‘taste’ for cruising which didn’t exist here before.”

He said Chinese shipyards are fully capable of building the hull and machinery, but as the cruise design and build is a highly sophisticated and integrated process, honed for more than three decades at the leading cruise ship building shipyards in Europe, support is needed from the outset to ensure that all aspects of the hotel portion of the program are designed, manufactured, installed and tested correctly.

Chinese shipbuilders recognize the need to acquire the experience, and are investing to do so. Reyes cited five keys for success in building cruise ships in China:

Reyes and his team were involved in two of the first cruise ship construction contracts in China: the frame contract to build 10 expedition vessels for Sunstone at China Merchants Heavy Industry; and the contract for a 218-m, 63,000-grt, 2,800-passenger RoRo ferry at Xiamen Shipbuilding Industry Co., Ltd.“We signed the first project with SunStone, which is a framework agreement for 10 ships to be built at China Merchant Heavy Industries in Haimen, China. China Merchants was very supportive, doing all that they could to make the project happen,” said Reyes.  Tillberg & Reyes Group Co., Ltd. were the brokers for the project, and it also helped in developing the financial structure. “The owner is a very experienced owner in the expedition vessel segment, so they knew exactly what they wanted.  We needed to have engineering from Europe which relates to the engineering relative to a passenger vessel,” something they do not have at a Chinese shipyard … yet, said Reyes. 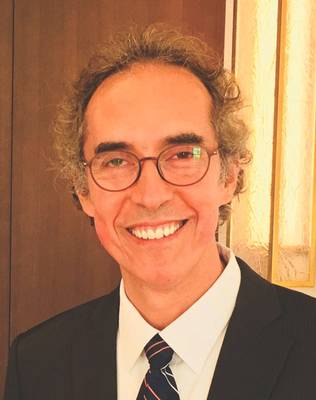 Show Me the Money
While bringing together the requisite engineering and hotel outfitting talent was necessary, in China Tillberg & Reyes Group Co., Ltd.  aims to be a one-stop-shop with finance assistance, too.“The finance channels in China were not geared for cruise ships – they have not done cruise ship (finance deals),” said Reyes. “So as we started talking to many different groups for the SunStone project, and for another possible project that we have right now, we realized how difficult (it is) in the finance: difficulties that have been clearly identified,” during the 4th Annual China Maritime Finance Forum.

To fill the gap Tillberg-Reyes Leasing Company was formed, a leasing company specializing in financing passenger vessel projects. “I like to think of ourselves as we are ‘integrators’ of highly experienced resources that work very well together, that make possible the construction of passenger vessels. So we integrate the brokers part of it, we integrate with the finance part of it, we bring the engineering that is necessary to the project, we integrate the outfitters that are necessary to the project, we integrate our own designs and project management. So it’s an integration of expert resources that make this possible.”

Another point made crystal clear at the Tianjin Summit was China’s plan to intensify penetration into global ship finance, filling a void left when traditional lenders in Europe tightened access to capital in the wake of the global financial recession. Finance leaders reiterated throughout the summit the lack of expertise in the field and the desire to gain intelligence, experience and share of market.

“Something I find interesting is that usually, when you are talking to a top leader, they would never tell you what they don’t know,” said Reyes. In China he has found the opposite. “I have found here that when you are talking to the highest level and most expert person in whatever field, they have no problem telling you, ‘I don’t know or we don’t know.’ That’s great because it opens a door for cooperation.” 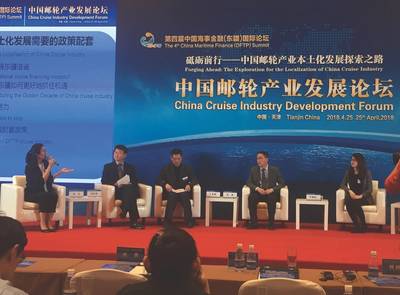 Understanding the Chinese Cruise Passenger
While cruise vessel construction in China is starting for international markets, catering to the tremendously large potential home market will be key to fueling future growth.

According to Hu Xiang, Chairman of Tianjin Xingang Shipbuilding Heavy Industry Co., Ltd., cruise vessels built for the Chinese market must have characteristics – including décor, food, shopping and gambling facilities – that are appealing to the China market. He took part in a signing ceremony during the 4th Annual China Maritime Finance Forum to develop, design and build an 80,000-ton passenger ship in his Tianjin, China shipyard that will be intent on delivering to that specification.

According to Reyes, it is simply not practical or cost effective to take an existing ship designed and built for the Caribbean market and to turn it into something that is broadly appealing to the Chinese cruise consumer. To do so would mean completely reconfiguring the ship, adding volumes to the shopping and casino spaces.

“How do I change that in a ship?,” Reyes asks rhetorically. “The space and power is already allocated; it’s very difficult to double or triple the size of the casino; the cost would be astronomical. As much as we can adjust an existing vessel and make it as comfortable as possible for the Chinese market, there are fundamental things in the design that we just cannot change.”

So the best option is designing and building from the ground up catered to the Chinese cruise consumer needs and tastes.

“They spend money, they go shopping. The way the cabins are designed, the size, the colors they like, the textures they like, the feeling inside the cabin. You can redecorate the cabin, but it doesn’t do much. So for that reason, many investment groups have recognized that they should build a ship for the Chinese market.”

SunStone’s Groundbreaking Deal
A steel-cutting ceremony was held for SunStone Ships, Inc.’s first new Infinity-class expedition cruise ship, and at the same time a shipbuilding contract was signed with China Merchant Heavy Industries (CMHI) for the series’ second vessel, Infinity II (tbr), scheduled for delivery in August 2020. “While we aren’t yet ready to announce the long-term charterer of the second vessel, we are happy to report that long-term charter contracts have already been signed for the Infinity III and Infinity IV,” said SunStone’s President & CEO, Niels-Erik Lund.

So far, shipbuilding orders have been confirmed for the first three Infinity-class vessels. The series is expected to reach up to 10 ships in total.

The new Infinity-class cruise ships are the first to feature European design, technology and oversight to be built in a Chinese shipyard. “We believe this is the perfect marriage of European cruising expertise with efficient and capable production in China,” said Lund. “Our Norwegian technical design, and our Finnish interior design will be brought to life by the oldest, most respected shipbuilder in China. Take into account delivery of our first vessel to an Australian customer, and we have a well-rounded global team making this dream a reality.” 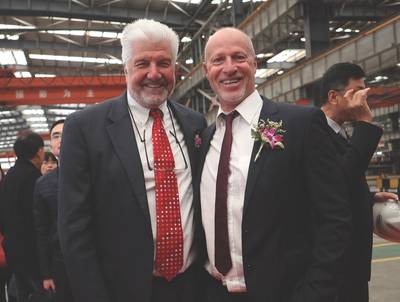 China Cruise Pioneer: Niels Erik-Lund’s SunStone Ships cut steel on its first new Infinity-class vessel to be built at China Merchant Heavy Industries. While the ships are being built in China, the project – which could eventually total 10 ships –  is a global collaboration.

This first ship will be on a long-term time charter to Aurora Cruises, Australia, who have named the vessel Greg Mortimer, after the respected explorer and founder of Aurora Cruises.

“The new vessels have quite a number of features not existing on the current expedition fleet,” said Lund. “First, the design is primarily focused on safety, comfort and green operation.  From a safety point of view, Infinity has Safe Return to Port, Polar Code 6, Ice Class 1A, and fulfill all the newest SOLAS regulations as well as all known SOLAS regulations coming into effect in the future.  From a comfort point of view, the vessels have zero speed stabilizers, X-bow and dynamic positioning, and is an all-balcony suite ship, with much more public space per passenger than most of the existing expedition fleet.”

The vessels will be equipped with a diesel/electric system with Tier III engines, operating on marine gas oil.  “In our opinion, based on the very remote areas of operation, as well as the need for long-range, from a practical point of view, there are no alternatives than the best possible diesel engines,” said Lund. 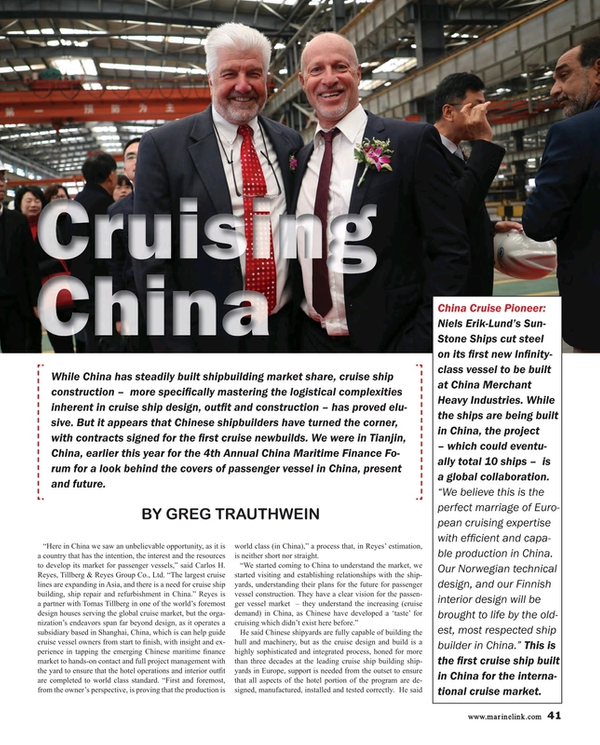 Other stories from June 2018 issue