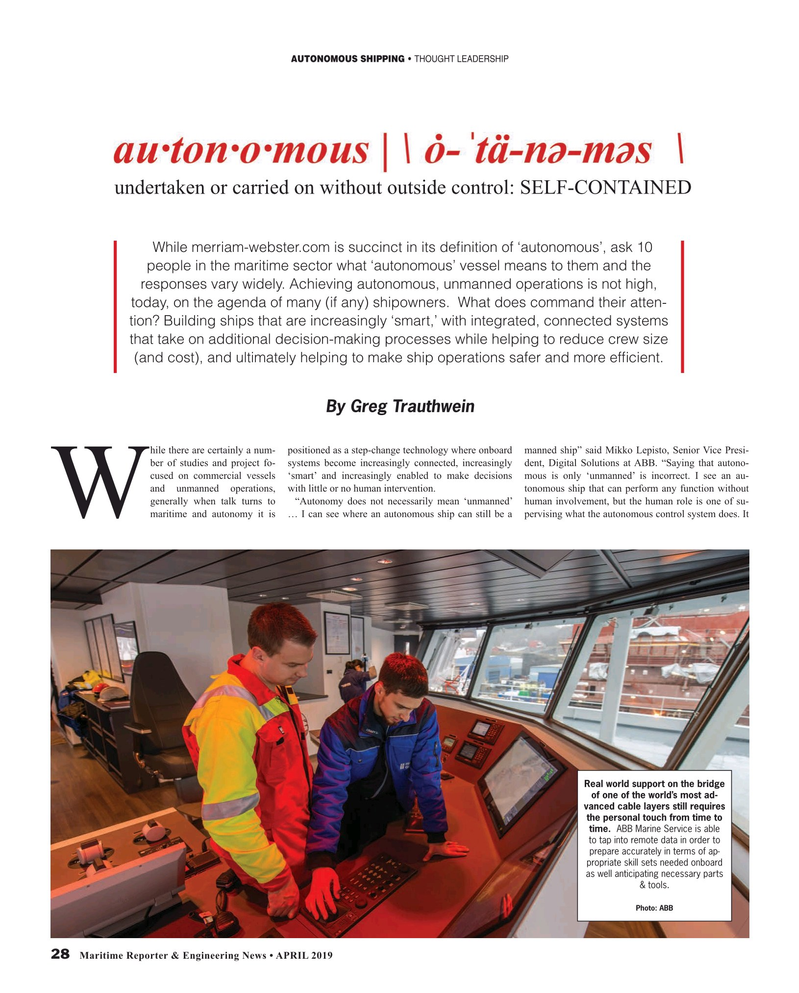 AUTONOMOUS SHIPPING • THOUGHT LEADERSHIP undertaken or carried on without outside control: SELF-CONTAINED

While merriam-webster.com is succinct in its de? nition of ‘autonomous’, ask 10 people in the maritime sector what ‘autonomous’ vessel means to them and the responses vary widely. Achieving autonomous, unmanned operations is not high, today, on the agenda of many (if any) shipowners. What does command their atten- tion? Building ships that are increasingly ‘smart,’ with integrated, connected systems that take on additional decision-making processes while helping to reduce crew size (and cost), and ultimately helping to make ship operations safer and more ef? cient.

By Greg Trauthwein hile there are certainly a num- positioned as a step-change technology where onboard manned ship” said Mikko Lepisto, Senior Vice Presi- ber of studies and project fo- systems become increasingly connected, increasingly dent, Digital Solutions at ABB. “Saying that autono- cused on commercial vessels ‘smart’ and increasingly enabled to make decisions mous is only ‘unmanned’ is incorrect. I see an au- and unmanned operations, with little or no human intervention. tonomous ship that can perform any function without generally when talk turns to “Autonomy does not necessarily mean ‘unmanned’ human involvement, but the human role is one of su-

W maritime and autonomy it is … I can see where an autonomous ship can still be a pervising what the autonomous control system does. It

Real world support on the bridge of one of the world’s most ad- vanced cable layers still requires the personal touch from time to time. ABB Marine Service is able to tap into remote data in order to prepare accurately in terms of ap- propriate skill sets needed onboard as well anticipating necessary parts & tools.