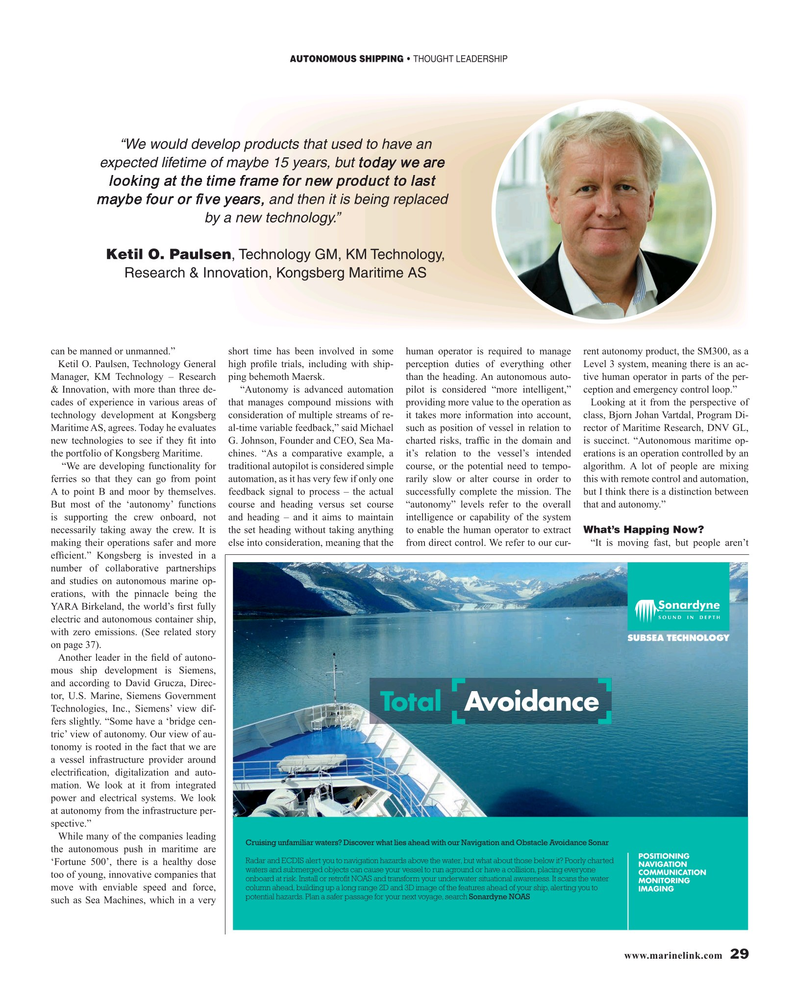 AUTONOMOUS SHIPPING • THOUGHT LEADERSHIP “We would develop products that used to have an expected lifetime of maybe 15 years, but today we are looking at the time frame for new product to last maybe four or ? ve years, and then it is being replaced by a new technology.”

Research & Innovation, Kongsberg Maritime AS can be manned or unmanned.” short time has been involved in some human operator is required to manage rent autonomy product, the SM300, as a

Ketil O. Paulsen, Technology General high pro? le trials, including with ship- perception duties of everything other Level 3 system, meaning there is an ac-

Manager, KM Technology – Research ping behemoth Maersk. than the heading. An autonomous auto- tive human operator in parts of the per- & Innovation, with more than three de- “Autonomy is advanced automation pilot is considered “more intelligent,” ception and emergency control loop.” cades of experience in various areas of that manages compound missions with providing more value to the operation as Looking at it from the perspective of technology development at Kongsberg consideration of multiple streams of re- it takes more information into account, class, Bjorn Johan Vartdal, Program Di-

Maritime AS, agrees. Today he evaluates al-time variable feedback,” said Michael such as position of vessel in relation to rector of Maritime Research, DNV GL, new technologies to see if they ? t into G. Johnson, Founder and CEO, Sea Ma- charted risks, traf? c in the domain and is succinct. “Autonomous maritime op- the portfolio of Kongsberg Maritime. chines. “As a comparative example, a it’s relation to the vessel’s intended erations is an operation controlled by an “We are developing functionality for traditional autopilot is considered simple course, or the potential need to tempo- algorithm. A lot of people are mixing ferries so that they can go from point automation, as it has very few if only one rarily slow or alter course in order to this with remote control and automation,

A to point B and moor by themselves. feedback signal to process – the actual successfully complete the mission. The but I think there is a distinction between

But most of the ‘autonomy’ functions course and heading versus set course “autonomy” levels refer to the overall that and autonomy.” is supporting the crew onboard, not and heading – and it aims to maintain intelligence or capability of the system necessarily taking away the crew. It is the set heading without taking anything to enable the human operator to extract What’s Happing Now?

making their operations safer and more else into consideration, meaning that the from direct control. We refer to our cur- “It is moving fast, but people aren’t ef? cient.” Kongsberg is invested in a number of collaborative partnerships and studies on autonomous marine op- erations, with the pinnacle being the

Another leader in the ? eld of autono- mous ship development is Siemens, and according to David Grucza, Direc- tor, U.S. Marine, Siemens Government

Technologies, Inc., Siemens’ view dif- fers slightly. “Some have a ‘bridge cen- tric’ view of autonomy. Our view of au- tonomy is rooted in the fact that we are a vessel infrastructure provider around electri? cation, digitalization and auto- mation. We look at it from integrated power and electrical systems. We look at autonomy from the infrastructure per- spective.”

While many of the companies leading the autonomous push in maritime are ‘Fortune 500’, there is a healthy dose too of young, innovative companies that move with enviable speed and force, such as Sea Machines, which in a very www.marinelink.com 29