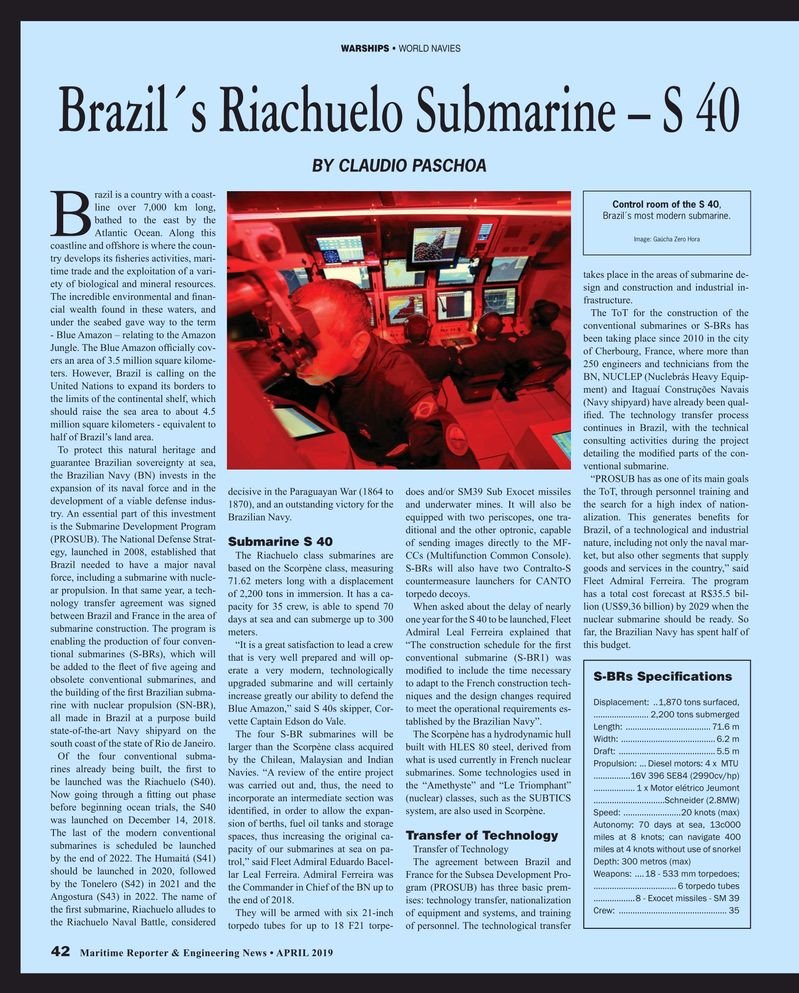 BY CLAUDIO PASCHOA razil is a country with a coast-

bathed to the east by the

Image: Gaúcha Zero Hora coastline and offshore is where the coun- try develops its ? sheries activities, mari- time trade and the exploitation of a vari- takes place in the areas of submarine de- ety of biological and mineral resources. sign and construction and industrial in-

The incredible environmental and ? nan- frastructure.

cial wealth found in these waters, and

Jungle. The Blue Amazon of? cially cov- of Cherbourg, France, where more than ers an area of 3.5 million square kilome- 250 engineers and technicians from the ters. However, Brazil is calling on the

United Nations to expand its borders to ment) and Itaguaí Construções Navais the limits of the continental shelf, which (Navy shipyard) have already been qual- should raise the sea area to about 4.5 i? ed. The technology transfer process million square kilometers - equivalent to continues in Brazil, with the technical half of Brazil’s land area.

consulting activities during the project

To protect this natural heritage and detailing the modi? ed parts of the con- guarantee Brazilian sovereignty at sea, ventional submarine.

the Brazilian Navy (BN) invests in the “PROSUB has as one of its main goals expansion of its naval force and in the decisive in the Paraguayan War (1864 to does and/or SM39 Sub Exocet missiles the ToT, through personnel training and development of a viable defense indus- 1870), and an outstanding victory for the and underwater mines. It will also be the search for a high index of nation- try. An essential part of this investment Brazilian Navy. equipped with two periscopes, one tra- alization. This generates bene? ts for is the Submarine Development Program ditional and the other optronic, capable Brazil, of a technological and industrial (PROSUB). The National Defense Strat-

Submarine S 40 of sending images directly to the MF- nature, including not only the naval mar- egy, launched in 2008, established that

The Riachuelo class submarines are CCs (Multifunction Common Console). ket, but also other segments that supply

Brazil needed to have a major naval based on the Scorpène class, measuring S-BRs will also have two Contralto-S goods and services in the country,” said force, including a submarine with nucle- 71.62 meters long with a displacement countermeasure launchers for CANTO Fleet Admiral Ferreira. The program ar propulsion. In that same year, a tech- of 2,200 tons in immersion. It has a ca- torpedo decoys. has a total cost forecast at R$35.5 bil- nology transfer agreement was signed pacity for 35 crew, is able to spend 70 When asked about the delay of nearly lion (US$9,36 billion) by 2029 when the between Brazil and France in the area of days at sea and can submerge up to 300 one year for the S 40 to be launched, Fleet nuclear submarine should be ready. So submarine construction. The program is meters. Admiral Leal Ferreira explained that far, the Brazilian Navy has spent half of enabling the production of four conven- “It is a great satisfaction to lead a crew “The construction schedule for the ? rst this budget.

tional submarines (S-BRs), which will that is very well prepared and will op- conventional submarine (S-BR1) was be added to the ? eet of ? ve ageing and erate a very modern, technologically modi? ed to include the time necessary

S-BRs Speci? cations obsolete conventional submarines, and upgraded submarine and will certainly to adapt to the French construction tech- the building of the ? rst Brazilian subma- increase greatly our ability to defend the niques and the design changes required

larger than the Scorpène class acquired built with HLES 80 steel, derived from

Of the four conventional subma- by the Chilean, Malaysian and Indian what is used currently in French nuclear

The last of the modern conventional spaces, thus increasing the original ca-

Depth: 300 metros (max) should be launched in 2020, followed lar Leal Ferreira. Admiral Ferreira was France for the Subsea Development Pro-

They will be armed with six 21-inch of equipment and systems, and training the Riachuelo Naval Battle, considered torpedo tubes for up to 18 F21 torpe- of personnel. The technological transfer 42 Maritime Reporter & Engineering News • APRIL 2019