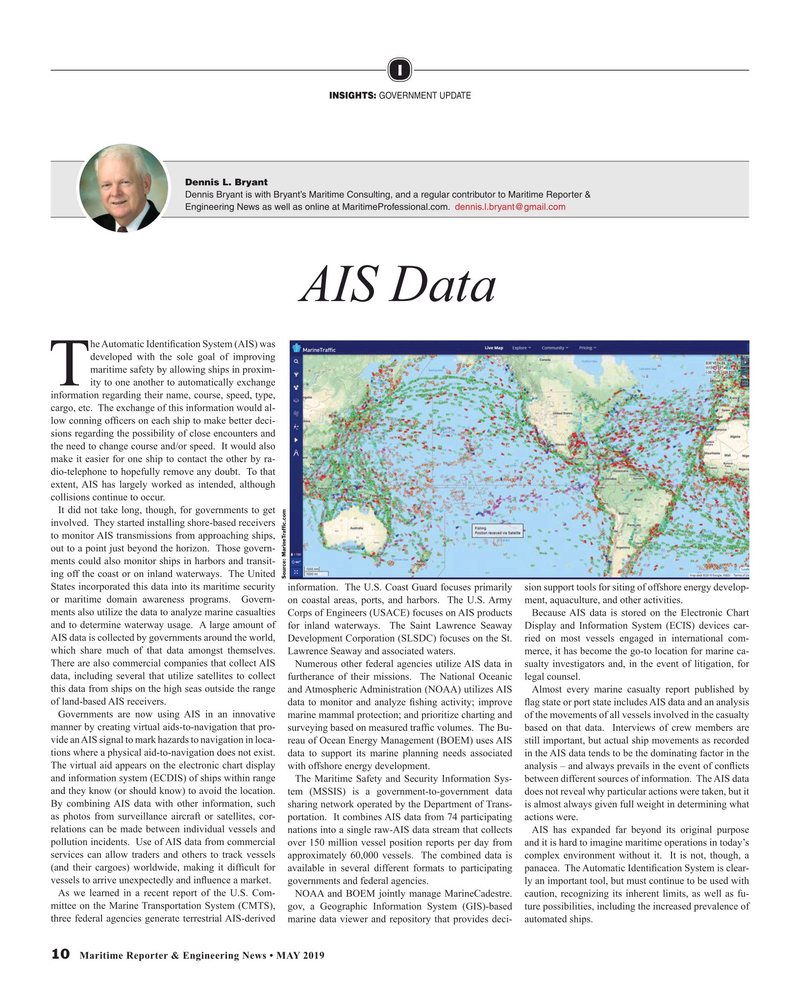 Dennis Bryant is with Bryant’s Maritime Consulting, and a regular contributor to Maritime Reporter &

AIS Data he Automatic Identi? cation System (AIS) was developed with the sole goal of improving maritime safety by allowing ships in proxim-

Tity to one another to automatically exchange information regarding their name, course, speed, type, cargo, etc. The exchange of this information would al- low conning of? cers on each ship to make better deci- sions regarding the possibility of close encounters and the need to change course and/or speed. It would also make it easier for one ship to contact the other by ra- dio-telephone to hopefully remove any doubt. To that extent, AIS has largely worked as intended, although collisions continue to occur.

It did not take long, though, for governments to get involved. They started installing shore-based receivers to monitor AIS transmissions from approaching ships, out to a point just beyond the horizon. Those govern- ments could also monitor ships in harbors and transit- ing off the coast or on inland waterways. The United

ments also utilize the data to analyze marine casualties Corps of Engineers (USACE) focuses on AIS products Because AIS data is stored on the Electronic Chart and to determine waterway usage. A large amount of for inland waterways. The Saint Lawrence Seaway Display and Information System (ECIS) devices car-

AIS data is collected by governments around the world, Development Corporation (SLSDC) focuses on the St. ried on most vessels engaged in international com- which share much of that data amongst themselves. Lawrence Seaway and associated waters. merce, it has become the go-to location for marine ca-

There are also commercial companies that collect AIS Numerous other federal agencies utilize AIS data in sualty investigators and, in the event of litigation, for data, including several that utilize satellites to collect furtherance of their missions. The National Oceanic legal counsel. this data from ships on the high seas outside the range and Atmospheric Administration (NOAA) utilizes AIS Almost every marine casualty report published by of land-based AIS receivers. data to monitor and analyze ? shing activity; improve ? ag state or port state includes AIS data and an analysis

Governments are now using AIS in an innovative marine mammal protection; and prioritize charting and of the movements of all vessels involved in the casualty manner by creating virtual aids-to-navigation that pro- surveying based on measured traf? c volumes. The Bu- based on that data. Interviews of crew members are vide an AIS signal to mark hazards to navigation in loca- reau of Ocean Energy Management (BOEM) uses AIS still important, but actual ship movements as recorded tions where a physical aid-to-navigation does not exist. data to support its marine planning needs associated in the AIS data tends to be the dominating factor in the

The virtual aid appears on the electronic chart display with offshore energy development. analysis – and always prevails in the event of con? icts and information system (ECDIS) of ships within range The Maritime Safety and Security Information Sys- between different sources of information. The AIS data and they know (or should know) to avoid the location. tem (MSSIS) is a government-to-government data does not reveal why particular actions were taken, but it

By combining AIS data with other information, such sharing network operated by the Department of Trans- is almost always given full weight in determining what as photos from surveillance aircraft or satellites, cor- portation. It combines AIS data from 74 participating actions were. relations can be made between individual vessels and nations into a single raw-AIS data stream that collects AIS has expanded far beyond its original purpose pollution incidents. Use of AIS data from commercial over 150 million vessel position reports per day from and it is hard to imagine maritime operations in today’s services can allow traders and others to track vessels approximately 60,000 vessels. The combined data is complex environment without it. It is not, though, a (and their cargoes) worldwide, making it dif? cult for available in several different formats to participating panacea. The Automatic Identi? cation System is clear- vessels to arrive unexpectedly and in? uence a market. governments and federal agencies. ly an important tool, but must continue to be used with