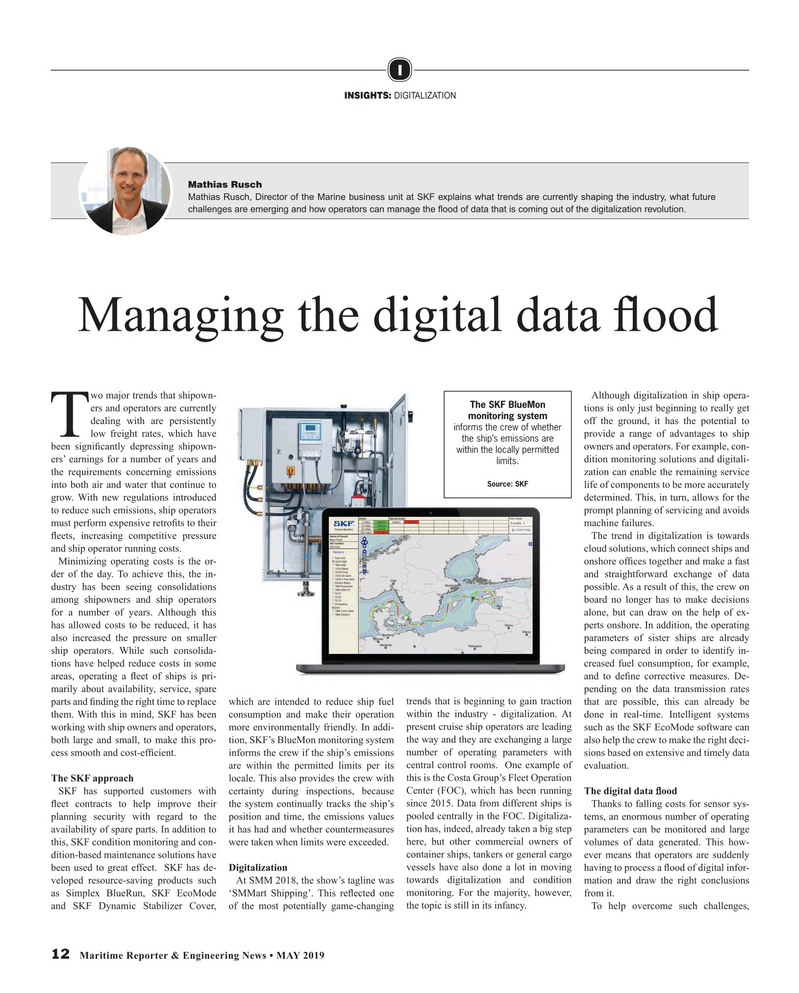 Mathias Rusch, Director of the Marine business unit at SKF explains what trends are currently shaping the industry, what future challenges are emerging and how operators can manage the ? ood of data that is coming out of the digitalization revolution.

Managing the digital data ? ood wo major trends that shipown- Although digitalization in ship opera-

The SKF BlueMon ers and operators are currently tions is only just beginning to really get monitoring system dealing with are persistently off the ground, it has the potential to informs the crew of whether

Tlow freight rates, which have provide a range of advantages to ship the ship’s emissions are been signi? cantly depressing shipown- owners and operators. For example, con- within the locally permitted ers’ earnings for a number of years and dition monitoring solutions and digitali- limits.

the requirements concerning emissions zation can enable the remaining service

Source: SKF into both air and water that continue to life of components to be more accurately grow. With new regulations introduced determined. This, in turn, allows for the to reduce such emissions, ship operators prompt planning of servicing and avoids must perform expensive retro? ts to their machine failures. ? eets, increasing competitive pressure The trend in digitalization is towards and ship operator running costs. cloud solutions, which connect ships and

Minimizing operating costs is the or- onshore of? ces together and make a fast der of the day. To achieve this, the in- and straightforward exchange of data dustry has been seeing consolidations possible. As a result of this, the crew on among shipowners and ship operators board no longer has to make decisions for a number of years. Although this alone, but can draw on the help of ex- has allowed costs to be reduced, it has perts onshore. In addition, the operating also increased the pressure on smaller parameters of sister ships are already ship operators. While such consolida- being compared in order to identify in- tions have helped reduce costs in some creased fuel consumption, for example, areas, operating a ? eet of ships is pri- and to de? ne corrective measures. De- marily about availability, service, spare pending on the data transmission rates parts and ? nding the right time to replace which are intended to reduce ship fuel trends that is beginning to gain traction that are possible, this can already be them. With this in mind, SKF has been consumption and make their operation within the industry - digitalization. At done in real-time. Intelligent systems working with ship owners and operators, more environmentally friendly. In addi- present cruise ship operators are leading such as the SKF EcoMode software can both large and small, to make this pro- tion, SKF’s BlueMon monitoring system the way and they are exchanging a large also help the crew to make the right deci- cess smooth and cost-ef? cient. informs the crew if the ship’s emissions number of operating parameters with sions based on extensive and timely data are within the permitted limits per its central control rooms. One example of evaluation.

The SKF approach locale. This also provides the crew with this is the Costa Group’s Fleet Operation

SKF has supported customers with certainty during inspections, because Center (FOC), which has been running The digital data ? ood ? eet contracts to help improve their the system continually tracks the ship’s since 2015. Data from different ships is Thanks to falling costs for sensor sys- planning security with regard to the position and time, the emissions values pooled centrally in the FOC. Digitaliza- tems, an enormous number of operating availability of spare parts. In addition to it has had and whether countermeasures tion has, indeed, already taken a big step parameters can be monitored and large this, SKF condition monitoring and con- were taken when limits were exceeded. here, but other commercial owners of volumes of data generated. This how- dition-based maintenance solutions have container ships, tankers or general cargo ever means that operators are suddenly been used to great effect. SKF has de- Digitalization vessels have also done a lot in moving having to process a ? ood of digital infor- veloped resource-saving products such At SMM 2018, the show’s tagline was towards digitalization and condition mation and draw the right conclusions as Simplex BlueRun, SKF EcoMode ‘SMMart Shipping’. This re? ected one monitoring. For the majority, however, from it. and SKF Dynamic Stabilizer Cover, of the most potentially game-changing the topic is still in its infancy. To help overcome such challenges, 12 Maritime Reporter & Engineering News • MAY 2019