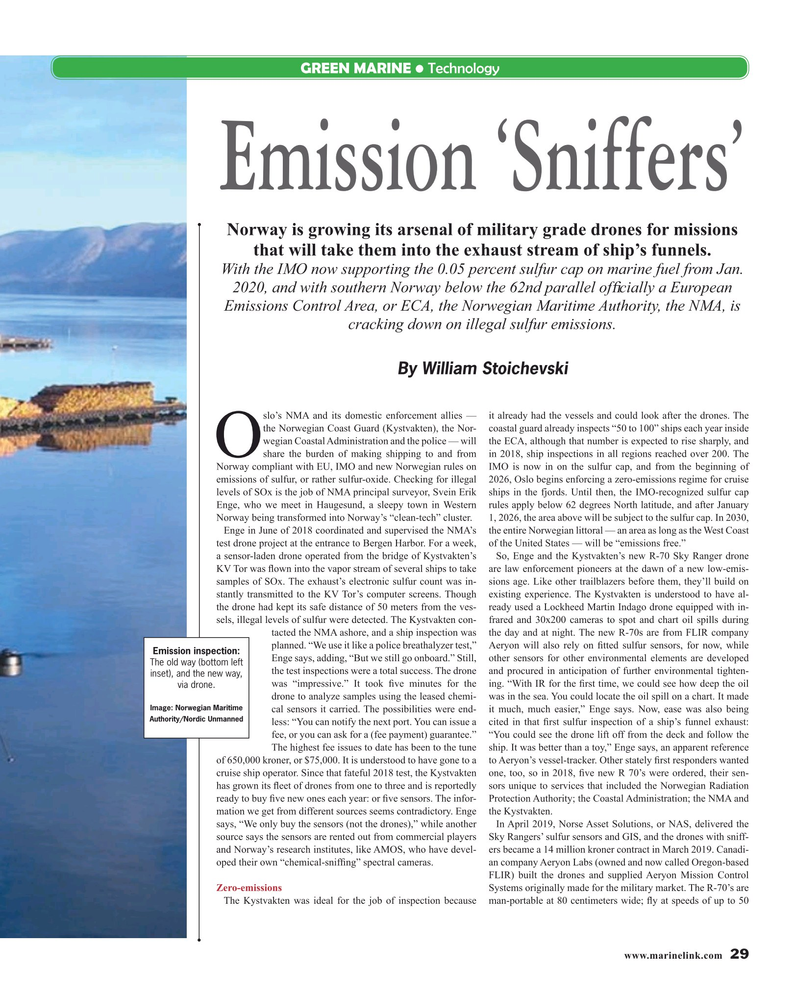 Norway is growing its arsenal of military grade drones for missions that will take them into the exhaust stream of ship’s funnels.

With the IMO now supporting the 0.05 percent sulfur cap on marine fuel from Jan. 2020, and with southern Norway below the 62nd parallel of? cially a European

Emissions Control Area, or ECA, the Norwegian Maritime Authority, the NMA, is cracking down on illegal sulfur emissions.

By William Stoichevski slo’s NMA and its domestic enforcement allies — it already had the vessels and could look after the drones. The the Norwegian Coast Guard (Kystvakten), the Nor- coastal guard already inspects “50 to 100” ships each year inside wegian Coastal Administration and the police — will the ECA, although that number is expected to rise sharply, and

Oshare the burden of making shipping to and from in 2018, ship inspections in all regions reached over 200. The

Norway compliant with EU, IMO and new Norwegian rules on IMO is now in on the sulfur cap, and from the beginning of emissions of sulfur, or rather sulfur-oxide. Checking for illegal 2026, Oslo begins enforcing a zero-emissions regime for cruise levels of SOx is the job of NMA principal surveyor, Svein Erik ships in the fjords. Until then, the IMO-recognized sulfur cap

Enge, who we meet in Haugesund, a sleepy town in Western rules apply below 62 degrees North latitude, and after January

Norway being transformed into Norway’s “clean-tech” cluster. 1, 2026, the area above will be subject to the sulfur cap. In 2030,

Enge in June of 2018 coordinated and supervised the NMA’s the entire Norwegian littoral — an area as long as the West Coast test drone project at the entrance to Bergen Harbor. For a week, of the United States — will be “emissions free.” a sensor-laden drone operated from the bridge of Kystvakten’s So, Enge and the Kystvakten’s new R-70 Sky Ranger drone

KV Tor was ? own into the vapor stream of several ships to take are law enforcement pioneers at the dawn of a new low-emis- samples of SOx. The exhaust’s electronic sulfur count was in- sions age. Like other trailblazers before them, they’ll build on stantly transmitted to the KV Tor’s computer screens. Though existing experience. The Kystvakten is understood to have al- the drone had kept its safe distance of 50 meters from the ves- ready used a Lockheed Martin Indago drone equipped with in- sels, illegal levels of sulfur were detected. The Kystvakten con- frared and 30x200 cameras to spot and chart oil spills during tacted the NMA ashore, and a ship inspection was the day and at night. The new R-70s are from FLIR company planned. “We use it like a police breathalyzer test,” Aeryon will also rely on ? tted sulfur sensors, for now, while

Enge says, adding, “But we still go onboard.” Still, other sensors for other environmental elements are developed

The old way (bottom left the test inspections were a total success. The drone and procured in anticipation of further environmental tighten- inset), and the new way, was “impressive.” It took ? ve minutes for the ing. “With IR for the ? rst time, we could see how deep the oil via drone.

drone to analyze samples using the leased chemi- was in the sea. You could locate the oil spill on a chart. It made

Image: Norwegian Maritime cal sensors it carried. The possibilities were end- it much, much easier,” Enge says. Now, ease was also being

Authority/Nordic Unmanned less: “You can notify the next port. You can issue a cited in that ? rst sulfur inspection of a ship’s funnel exhaust: fee, or you can ask for a (fee payment) guarantee.” “You could see the drone lift off from the deck and follow the

The highest fee issues to date has been to the tune ship. It was better than a toy,” Enge says, an apparent reference of 650,000 kroner, or $75,000. It is understood to have gone to a to Aeryon’s vessel-tracker. Other stately ? rst responders wanted cruise ship operator. Since that fateful 2018 test, the Kystvakten one, too, so in 2018, ? ve new R 70’s were ordered, their sen- has grown its ? eet of drones from one to three and is reportedly sors unique to services that included the Norwegian Radiation ready to buy ? ve new ones each year: or ? ve sensors. The infor- Protection Authority; the Coastal Administration; the NMA and mation we get from different sources seems contradictory. Enge the Kystvakten. says, “We only buy the sensors (not the drones),” while another In April 2019, Norse Asset Solutions, or NAS, delivered the source says the sensors are rented out from commercial players Sky Rangers’ sulfur sensors and GIS, and the drones with sniff- and Norway’s research institutes, like AMOS, who have devel- ers became a 14 million kroner contract in March 2019. Canadi- oped their own “chemical-snif? ng” spectral cameras. an company Aeryon Labs (owned and now called Oregon-based

Zero-emissions Systems originally made for the military market. The R-70’s are

The Kystvakten was ideal for the job of inspection because man-portable at 80 centimeters wide; ? y at speeds of up to 50 www.marinelink.com 29