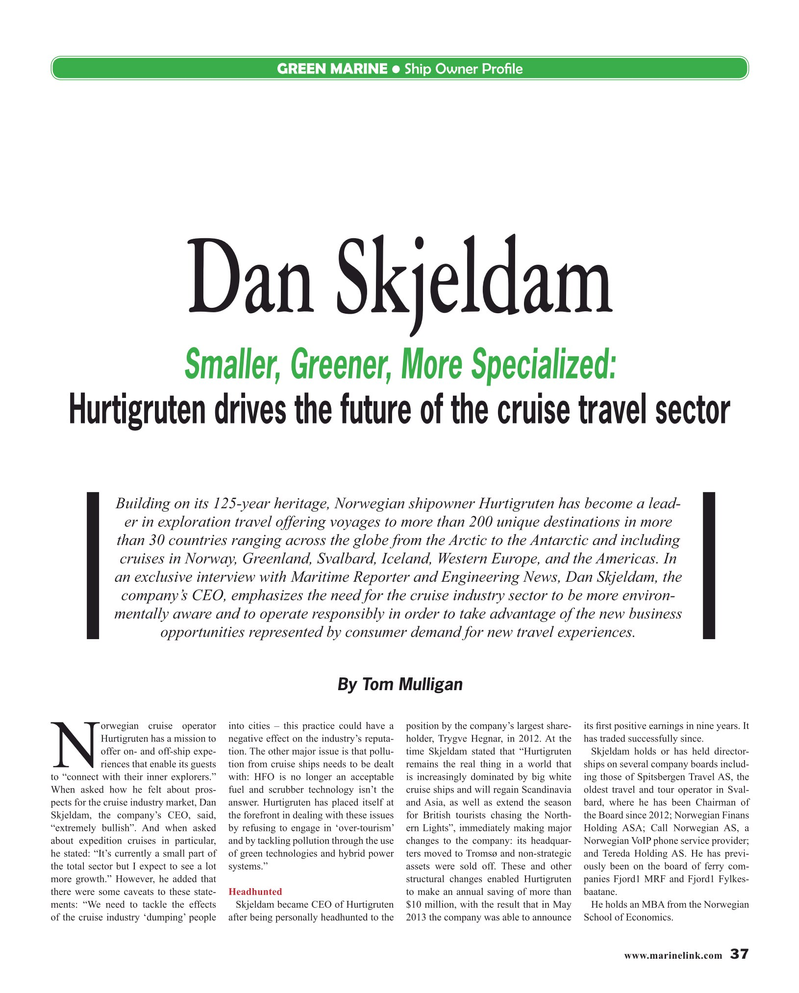 Hurtigruten drives the future of the cruise travel sector

Building on its 125-year heritage, Norwegian shipowner Hurtigruten has become a lead- er in exploration travel offering voyages to more than 200 unique destinations in more than 30 countries ranging across the globe from the Arctic to the Antarctic and including cruises in Norway, Greenland, Svalbard, Iceland, Western Europe, and the Americas. In an exclusive interview with Maritime Reporter and Engineering News, Dan Skjeldam, the company’s CEO, emphasizes the need for the cruise industry sector to be more environ- mentally aware and to operate responsibly in order to take advantage of the new business opportunities represented by consumer demand for new travel experiences.

By Tom Mulligan orwegian cruise operator into cities – this practice could have a position by the company’s largest share- its ? rst positive earnings in nine years. It

Hurtigruten has a mission to negative effect on the industry’s reputa- holder, Trygve Hegnar, in 2012. At the has traded successfully since.

offer on- and off-ship expe- tion. The other major issue is that pollu- time Skjeldam stated that “Hurtigruten Skjeldam holds or has held director-

Nriences that enable its guests tion from cruise ships needs to be dealt remains the real thing in a world that ships on several company boards includ- to “connect with their inner explorers.” with: HFO is no longer an acceptable is increasingly dominated by big white ing those of Spitsbergen Travel AS, the

When asked how he felt about pros- fuel and scrubber technology isn’t the cruise ships and will regain Scandinavia oldest travel and tour operator in Sval- pects for the cruise industry market, Dan answer. Hurtigruten has placed itself at and Asia, as well as extend the season bard, where he has been Chairman of

Skjeldam, the company’s CEO, said, the forefront in dealing with these issues for British tourists chasing the North- the Board since 2012; Norwegian Finans “extremely bullish”. And when asked by refusing to engage in ‘over-tourism’ ern Lights”, immediately making major Holding ASA; Call Norwegian AS, a about expedition cruises in particular, and by tackling pollution through the use changes to the company: its headquar- Norwegian VoIP phone service provider; he stated: “It’s currently a small part of of green technologies and hybrid power ters moved to Tromsø and non-strategic and Tereda Holding AS. He has previ- the total sector but I expect to see a lot systems.” assets were sold off. These and other ously been on the board of ferry com- more growth.” However, he added that structural changes enabled Hurtigruten panies Fjord1 MRF and Fjord1 Fylkes- there were some caveats to these state- Headhunted to make an annual saving of more than baatane. ments: “We need to tackle the effects Skjeldam became CEO of Hurtigruten $10 million, with the result that in May He holds an MBA from the Norwegian of the cruise industry ‘dumping’ people after being personally headhunted to the 2013 the company was able to announce School of Economics.