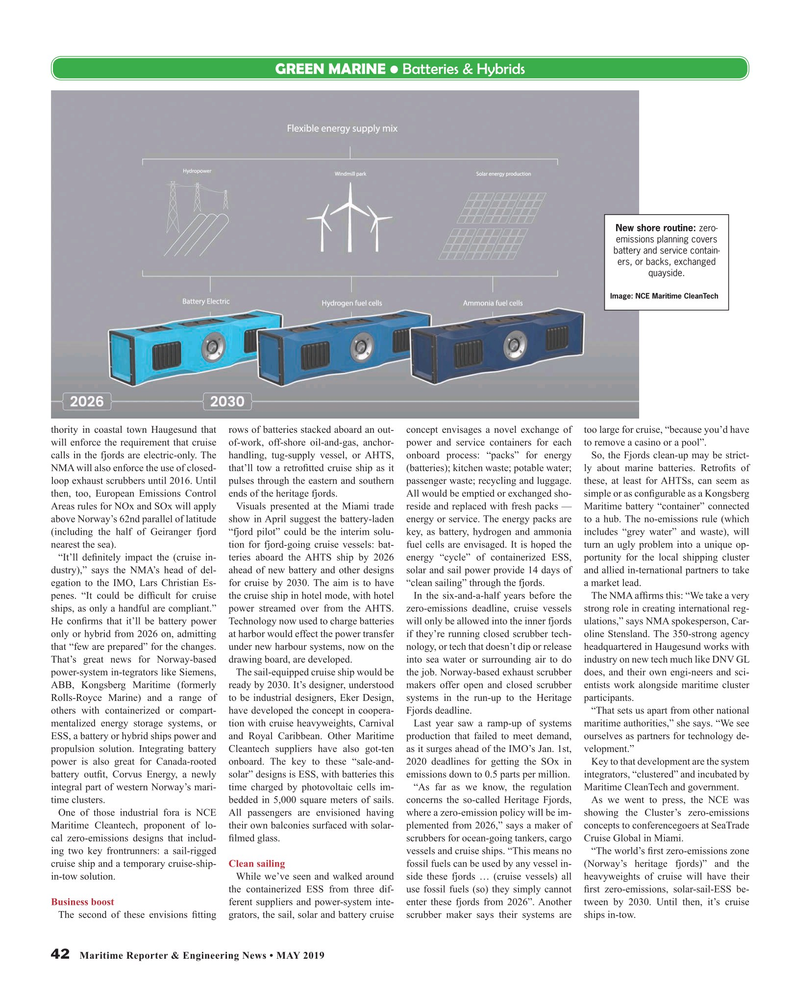 Image: NCE Maritime CleanTech thority in coastal town Haugesund that rows of batteries stacked aboard an out- concept envisages a novel exchange of too large for cruise, “because you’d have will enforce the requirement that cruise of-work, off-shore oil-and-gas, anchor- power and service containers for each to remove a casino or a pool”. calls in the fjords are electric-only. The handling, tug-supply vessel, or AHTS, onboard process: “packs” for energy So, the Fjords clean-up may be strict-

NMA will also enforce the use of closed- that’ll tow a retro? tted cruise ship as it (batteries); kitchen waste; potable water; ly about marine batteries. Retro? ts of loop exhaust scrubbers until 2016. Until pulses through the eastern and southern passenger waste; recycling and luggage. these, at least for AHTSs, can seem as then, too, European Emissions Control ends of the heritage fjords. All would be emptied or exchanged sho- simple or as con? gurable as a Kongsberg

Areas rules for NOx and SOx will apply Visuals presented at the Miami trade reside and replaced with fresh packs — Maritime battery “container” connected above Norway’s 62nd parallel of latitude show in April suggest the battery-laden energy or service. The energy packs are to a hub. The no-emissions rule (which (including the half of Geiranger fjord “fjord pilot” could be the interim solu- key, as battery, hydrogen and ammonia includes “grey water” and waste), will nearest the sea). tion for fjord-going cruise vessels: bat- fuel cells are envisaged. It is hoped the turn an ugly problem into a unique op- “It’ll de? nitely impact the (cruise in- teries aboard the AHTS ship by 2026 energy “cycle” of containerized ESS, portunity for the local shipping cluster dustry),” says the NMA’s head of del- ahead of new battery and other designs solar and sail power provide 14 days of and allied in-ternational partners to take egation to the IMO, Lars Christian Es- for cruise by 2030. The aim is to have “clean sailing” through the fjords. a market lead.

penes. “It could be dif? cult for cruise the cruise ship in hotel mode, with hotel In the six-and-a-half years before the The NMA af? rms this: “We take a very ships, as only a handful are compliant.” power streamed over from the AHTS. zero-emissions deadline, cruise vessels strong role in creating international reg-

He con? rms that it’ll be battery power Technology now used to charge batteries will only be allowed into the inner fjords ulations,” says NMA spokesperson, Car- only or hybrid from 2026 on, admitting at harbor would effect the power transfer if they’re running closed scrubber tech- oline Stensland. The 350-strong agency that “few are prepared” for the changes. under new harbour systems, now on the nology, or tech that doesn’t dip or release headquartered in Haugesund works with

That’s great news for Norway-based drawing board, are developed. into sea water or surrounding air to do industry on new tech much like DNV GL power-system in-tegrators like Siemens, The sail-equipped cruise ship would be the job. Norway-based exhaust scrubber does, and their own engi-neers and sci-

Rolls-Royce Marine) and a range of to be industrial designers, Eker Design, systems in the run-up to the Heritage participants. others with containerized or compart- have developed the concept in coopera- Fjords deadline. “That sets us apart from other national mentalized energy storage systems, or tion with cruise heavyweights, Carnival Last year saw a ramp-up of systems maritime authorities,” she says. “We see

ESS, a battery or hybrid ships power and and Royal Caribbean. Other Maritime production that failed to meet demand, ourselves as partners for technology de- propulsion solution. Integrating battery Cleantech suppliers have also got-ten as it surges ahead of the IMO’s Jan. 1st, velopment.” power is also great for Canada-rooted onboard. The key to these “sale-and- 2020 deadlines for getting the SOx in Key to that development are the system battery out? t, Corvus Energy, a newly solar” designs is ESS, with batteries this emissions down to 0.5 parts per million. integrators, “clustered” and incubated by integral part of western Norway’s mari- time charged by photovoltaic cells im- “As far as we know, the regulation Maritime CleanTech and government. time clusters. bedded in 5,000 square meters of sails. concerns the so-called Heritage Fjords, As we went to press, the NCE was

Maritime Cleantech, proponent of lo- their own balconies surfaced with solar- plemented from 2026,” says a maker of concepts to conferencegoers at SeaTrade cal zero-emissions designs that includ- ? lmed glass. scrubbers for ocean-going tankers, cargo Cruise Global in Miami. ing two key frontrunners: a sail-rigged vessels and cruise ships. “This means no “The world’s ? rst zero-emissions zone cruise ship and a temporary cruise-ship- Clean sailing fossil fuels can be used by any vessel in- (Norway’s heritage fjords)” and the in-tow solution. While we’ve seen and walked around side these fjords … (cruise vessels) all heavyweights of cruise will have their the containerized ESS from three dif- use fossil fuels (so) they simply cannot ? rst zero-emissions, solar-sail-ESS be-

Business boost ferent suppliers and power-system inte- enter these fjords from 2026”. Another tween by 2030. Until then, it’s cruise

The second of these envisions ? tting grators, the sail, solar and battery cruise scrubber maker says their systems are ships in-tow.