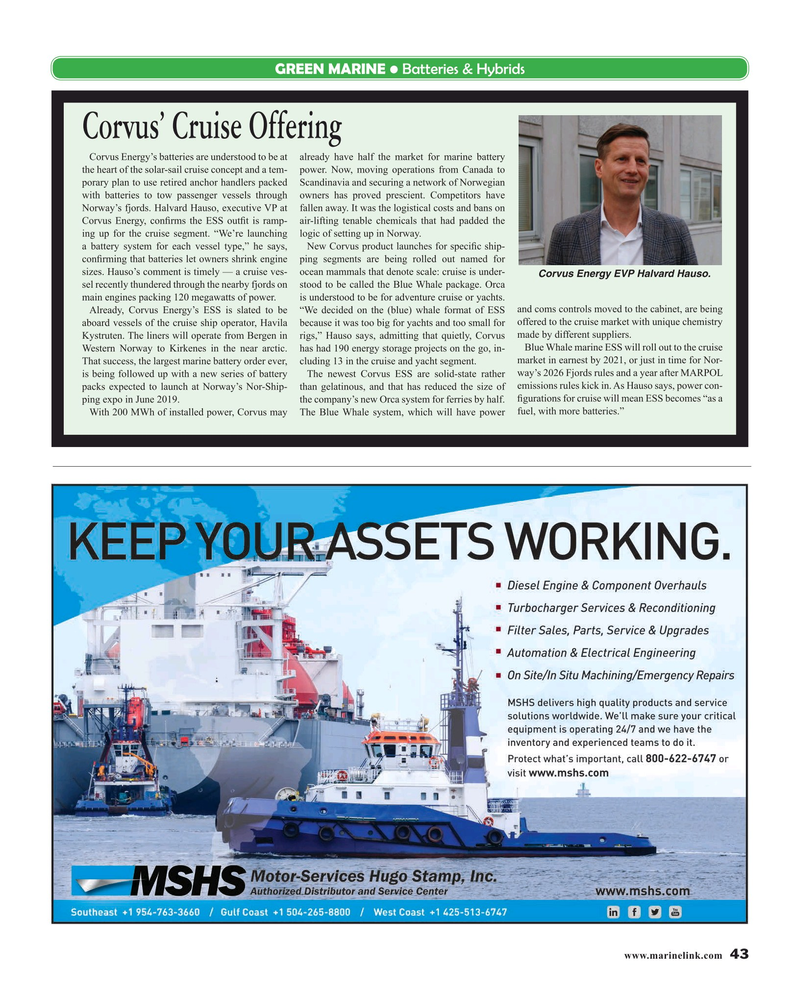 Corvus Energy’s batteries are understood to be at already have half the market for marine battery the heart of the solar-sail cruise concept and a tem- power. Now, moving operations from Canada to porary plan to use retired anchor handlers packed Scandinavia and securing a network of Norwegian with batteries to tow passenger vessels through owners has proved prescient. Competitors have

Norway’s fjords. Halvard Hauso, executive VP at fallen away. It was the logistical costs and bans on

Corvus Energy, con? rms the ESS out? t is ramp- air-lifting tenable chemicals that had padded the ing up for the cruise segment. “We’re launching logic of setting up in Norway. a battery system for each vessel type,” he says, New Corvus product launches for speci? c ship- con? rming that batteries let owners shrink engine ping segments are being rolled out named for sizes. Hauso’s comment is timely — a cruise ves- ocean mammals that denote scale: cruise is under-

sel recently thundered through the nearby fjords on stood to be called the Blue Whale package. Orca main engines packing 120 megawatts of power. is understood to be for adventure cruise or yachts.

Already, Corvus Energy’s ESS is slated to be “We decided on the (blue) whale format of ESS and coms controls moved to the cabinet, are being aboard vessels of the cruise ship operator, Havila because it was too big for yachts and too small for offered to the cruise market with unique chemistry

Kystruten. The liners will operate from Bergen in rigs,” Hauso says, admitting that quietly, Corvus made by different suppliers.

Western Norway to Kirkenes in the near arctic. has had 190 energy storage projects on the go, in- Blue Whale marine ESS will roll out to the cruise

That success, the largest marine battery order ever, cluding 13 in the cruise and yacht segment. market in earnest by 2021, or just in time for Nor- is being followed up with a new series of battery The newest Corvus ESS are solid-state rather way’s 2026 Fjords rules and a year after MARPOL packs expected to launch at Norway’s Nor-Ship- than gelatinous, and that has reduced the size of emissions rules kick in. As Hauso says, power con- ping expo in June 2019. the company’s new Orca system for ferries by half. ? gurations for cruise will mean ESS becomes “as a

With 200 MWh of installed power, Corvus may The Blue Whale system, which will have power fuel, with more batteries.” www.marinelink.com 43