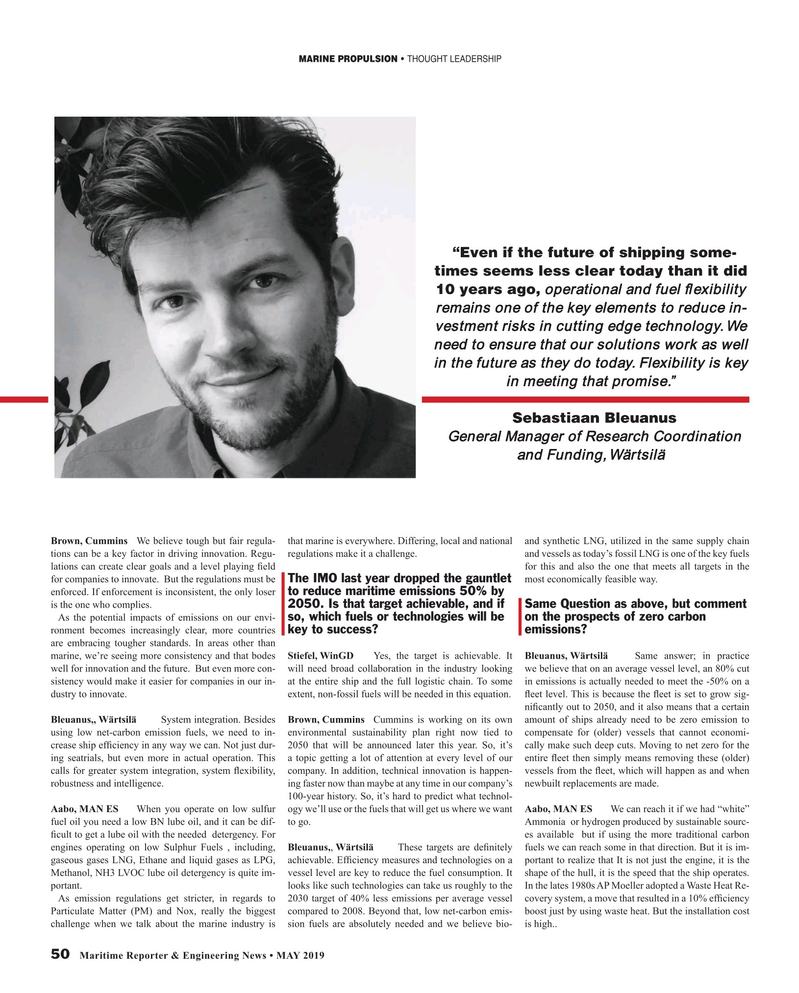 MARINE PROPULSION • THOUGHT LEADERSHIP “Even if the future of shipping some- times seems less clear today than it did 10 years ago, operational and fuel ? exibility remains one of the key elements to reduce in- vestment risks in cutting edge technology. We need to ensure that our solutions work as well in the future as they do today. Flexibility is key in meeting that promise.”

Brown, Cummins We believe tough but fair regula- that marine is everywhere. Differing, local and national and synthetic LNG, utilized in the same supply chain tions can be a key factor in driving innovation. Regu- regulations make it a challenge. and vessels as today’s fossil LNG is one of the key fuels lations can create clear goals and a level playing ? eld for this and also the one that meets all targets in the for companies to innovate. But the regulations must be most economically feasible way. The IMO last year dropped the gauntlet to reduce maritime emissions 50% by enforced. If enforcement is inconsistent, the only loser 2050. Is that target achievable, and if Same Question as above, but comment is the one who complies.

so, which fuels or technologies will be on the prospects of zero carbon

As the potential impacts of emissions on our envi- key to success? emissions?

ronment becomes increasingly clear, more countries are embracing tougher standards. In areas other than marine, we’re seeing more consistency and that bodes Stiefel, WinGD Yes, the target is achievable. It Bleuanus, Wärtsilä Same answer; in practice well for innovation and the future. But even more con- will need broad collaboration in the industry looking we believe that on an average vessel level, an 80% cut sistency would make it easier for companies in our in- at the entire ship and the full logistic chain. To some in emissions is actually needed to meet the -50% on a dustry to innovate. extent, non-fossil fuels will be needed in this equation. ? eet level. This is because the ? eet is set to grow sig- ni? cantly out to 2050, and it also means that a certain

Bleuanus,, Wärtsilä System integration. Besides Brown, Cummins Cummins is working on its own amount of ships already need to be zero emission to using low net-carbon emission fuels, we need to in- environmental sustainability plan right now tied to compensate for (older) vessels that cannot economi- crease ship ef? ciency in any way we can. Not just dur- 2050 that will be announced later this year. So, it’s cally make such deep cuts. Moving to net zero for the ing seatrials, but even more in actual operation. This a topic getting a lot of attention at every level of our entire ? eet then simply means removing these (older) calls for greater system integration, system ? exibility, company. In addition, technical innovation is happen- vessels from the ? eet, which will happen as and when robustness and intelligence. ing faster now than maybe at any time in our company’s newbuilt replacements are made.

100-year history. So, it’s hard to predict what technol-

Aabo, MAN ES When you operate on low sulfur ogy we’ll use or the fuels that will get us where we want Aabo, MAN ES We can reach it if we had “white” fuel oil you need a low BN lube oil, and it can be dif- to go. Ammonia or hydrogen produced by sustainable sourc- ? cult to get a lube oil with the needed detergency. For es available but if using the more traditional carbon engines operating on low Sulphur Fuels , including, Bleuanus,, Wärtsilä These targets are de? nitely fuels we can reach some in that direction. But it is im- gaseous gases LNG, Ethane and liquid gases as LPG, achievable. Ef? ciency measures and technologies on a portant to realize that It is not just the engine, it is the

Methanol, NH3 LVOC lube oil detergency is quite im- vessel level are key to reduce the fuel consumption. It shape of the hull, it is the speed that the ship operates. portant. looks like such technologies can take us roughly to the In the lates 1980s AP Moeller adopted a Waste Heat Re-

As emission regulations get stricter, in regards to 2030 target of 40% less emissions per average vessel covery system, a move that resulted in a 10% ef? ciency

Particulate Matter (PM) and Nox, really the biggest compared to 2008. Beyond that, low net-carbon emis- boost just by using waste heat. But the installation cost challenge when we talk about the marine industry is sion fuels are absolutely needed and we believe bio- is high..