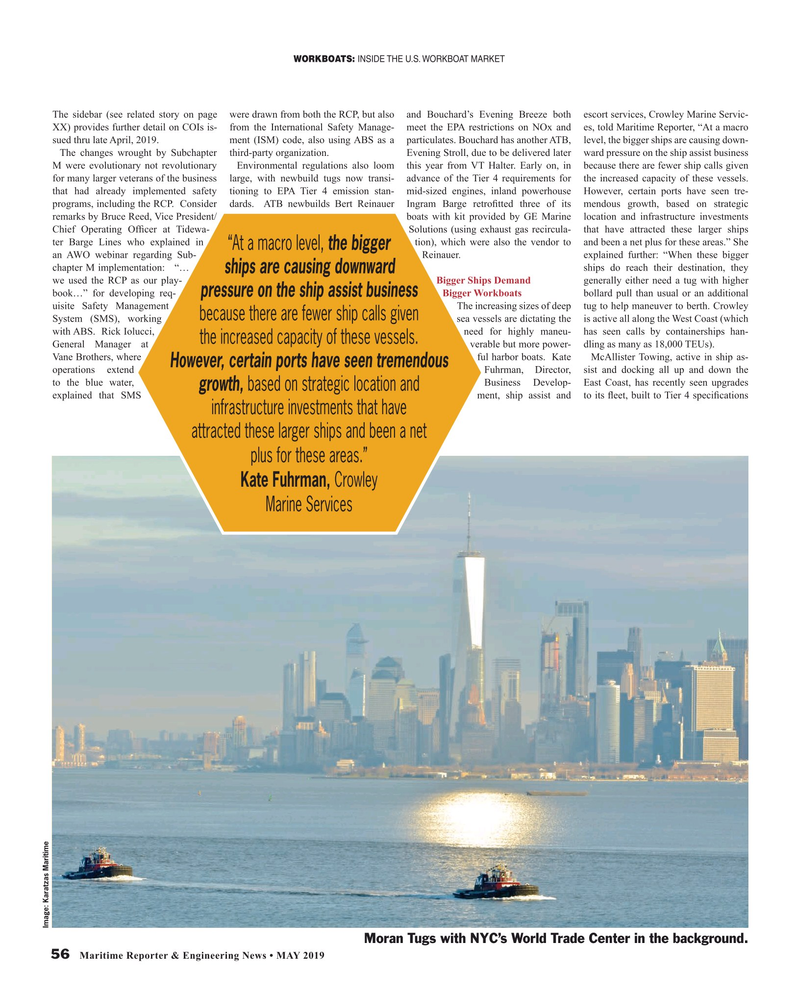 WORKBOATS: INSIDE THE U.S. WORKBOAT MARKET

The sidebar (see related story on page were drawn from both the RCP, but also and Bouchard’s Evening Breeze both escort services, Crowley Marine Servic-

XX) provides further detail on COIs is- from the International Safety Manage- meet the EPA restrictions on NOx and es, told Maritime Reporter, “At a macro sued thru late April, 2019. ment (ISM) code, also using ABS as a particulates. Bouchard has another ATB, level, the bigger ships are causing down-

The changes wrought by Subchapter third-party organization. Evening Stroll, due to be delivered later ward pressure on the ship assist business

M were evolutionary not revolutionary Environmental regulations also loom this year from VT Halter. Early on, in because there are fewer ship calls given for many larger veterans of the business large, with newbuild tugs now transi- advance of the Tier 4 requirements for the increased capacity of these vessels. that had already implemented safety tioning to EPA Tier 4 emission stan- mid-sized engines, inland powerhouse However, certain ports have seen tre- programs, including the RCP. Consider dards. ATB newbuilds Bert Reinauer Ingram Barge retro? tted three of its mendous growth, based on strategic remarks by Bruce Reed, Vice President/ boats with kit provided by GE Marine location and infrastructure investments

Chief Operating Of? cer at Tidewa- Solutions (using exhaust gas recircula- that have attracted these larger ships ter Barge Lines who explained in tion), which were also the vendor to and been a net plus for these areas.” She “At a macro level, the bigger an AWO webinar regarding Sub- Reinauer. explained further: “When these bigger chapter M implementation: “… ships do reach their destination, they ships are causing downward we used the RCP as our play- Bigger Ships Demand generally either need a tug with higher book…” for developing req- Bigger Workboats bollard pull than usual or an additional pressure on the ship assist business uisite Safety Management The increasing sizes of deep tug to help maneuver to berth. Crowley because there are fewer ship calls given

System (SMS), working sea vessels are dictating the is active all along the West Coast (which with ABS. Rick Iolucci, need for highly maneu- has seen calls by containerships han- the increased capacity of these vessels.

General Manager at verable but more power- dling as many as 18,000 TEUs).

However, certain ports have seen tremendous operations extend Fuhrman, Director, sist and docking all up and down the to the blue water, Business Develop- East Coast, has recently seen upgrades growth, based on strategic location and explained that SMS ment, ship assist and to its ? eet, built to Tier 4 speci? cations infrastructure investments that have attracted these larger ships and been a net plus for these areas.”

Moran Tugs with NYC’s World Trade Center in the background.