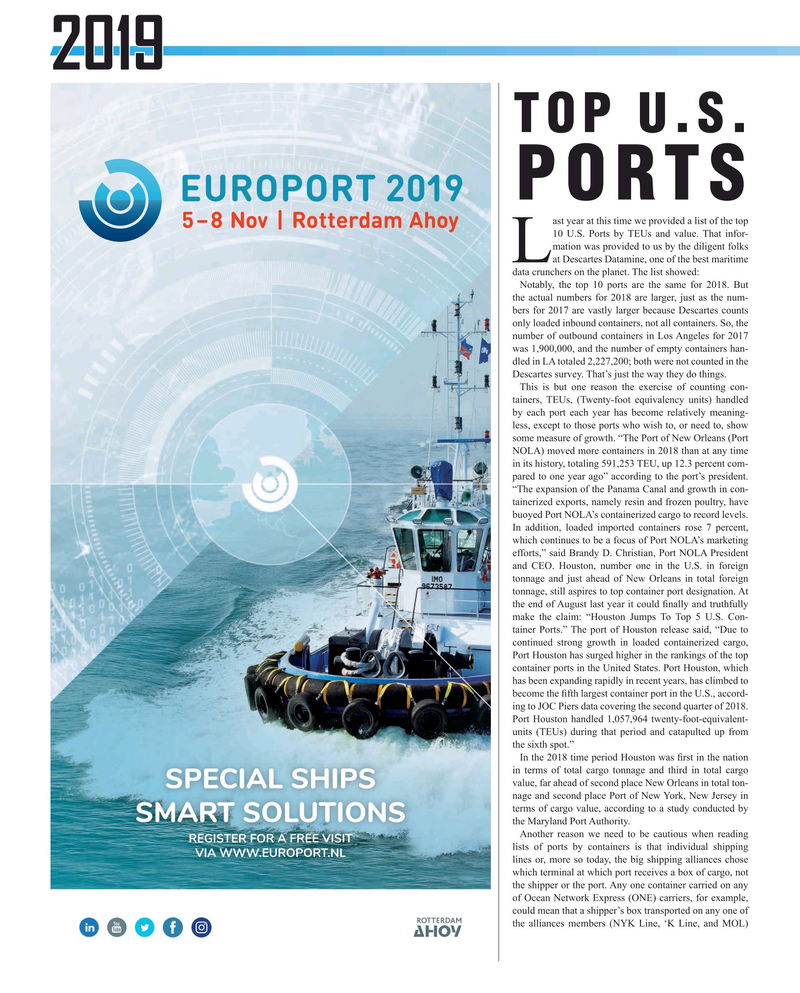 PORTS ast year at this time we provided a list of the top 10 U.S. Ports by TEUs and value. That infor- mation was provided to us by the diligent folks

Lat Descartes Datamine, one of the best maritime data crunchers on the planet. The list showed:

Descartes survey. That’s just the way they do things.

This is but one reason the exercise of counting con- tainers, TEUs, (Twenty-foot equivalency units) handled by each port each year has become relatively meaning- less, except to those ports who wish to, or need to, show some measure of growth. “The Port of New Orleans (Port

NOLA) moved more containers in 2018 than at any time in its history, totaling 591,253 TEU, up 12.3 percent com- pared to one year ago” according to the port’s president. “The expansion of the Panama Canal and growth in con- tainerized exports, namely resin and frozen poultry, have buoyed Port NOLA’s containerized cargo to record levels.

In addition, loaded imported containers rose 7 percent, which continues to be a focus of Port NOLA’s marketing efforts,” said Brandy D. Christian, Port NOLA President and CEO. Houston, number one in the U.S. in foreign tonnage and just ahead of New Orleans in total foreign tonnage, still aspires to top container port designation. At the end of August last year it could ? nally and truthfully make the claim: “Houston Jumps To Top 5 U.S. Con- tainer Ports.” The port of Houston release said, “Due to continued strong growth in loaded containerized cargo,

Port Houston has surged higher in the rankings of the top container ports in the United States. Port Houston, which has been expanding rapidly in recent years, has climbed to become the ? fth largest container port in the U.S., accord- ing to JOC Piers data covering the second quarter of 2018.

Port Houston handled 1,057,964 twenty-foot-equivalent- units (TEUs) during that period and catapulted up from the sixth spot.”

Another reason we need to be cautious when reading lists of ports by containers is that individual shipping lines or, more so today, the big shipping alliances chose which terminal at which port receives a box of cargo, not the shipper or the port. Any one container carried on any of Ocean Network Express (ONE) carriers, for example, could mean that a shipper’s box transported on any one of the alliances members (NYK Line, ‘K Line, and MOL)