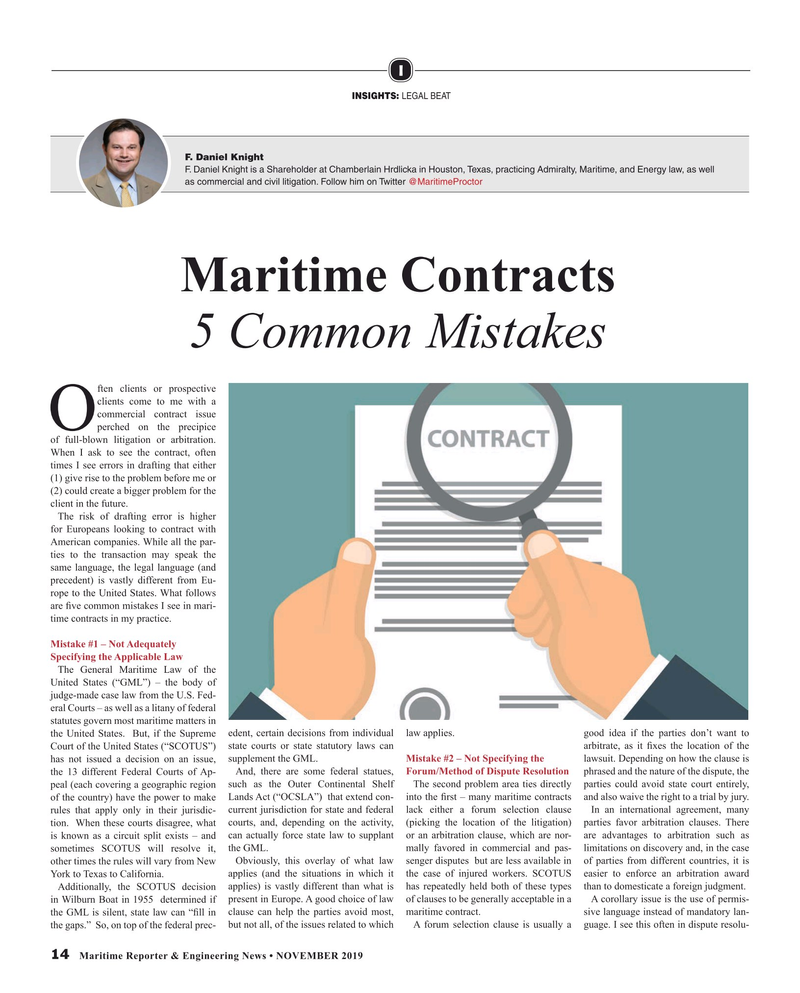 F. Daniel Knight is a Shareholder at Chamberlain Hrdlicka in Houston, Texas, practicing Admiralty, Maritime, and Energy law, as well as commercial and civil litigation. Follow him on Twitter @MaritimeProctor

Operched on the precipice of full-blown litigation or arbitration.

When I ask to see the contract, often times I see errors in drafting that either (1) give rise to the problem before me or (2) could create a bigger problem for the client in the future.

American companies. While all the par- ties to the transaction may speak the same language, the legal language (and precedent) is vastly different from Eu- rope to the United States. What follows are ? ve common mistakes I see in mari- time contracts in my practice.

The General Maritime Law of the

United States (“GML”) – the body of judge-made case law from the U.S. Fed- eral Courts – as well as a litany of federal statutes govern most maritime matters in the United States. But, if the Supreme edent, certain decisions from individual law applies. good idea if the parties don’t want to

Court of the United States (“SCOTUS”) state courts or state statutory laws can arbitrate, as it ? xes the location of the has not issued a decision on an issue, supplement the GML. Mistake #2 – Not Specifying the lawsuit. Depending on how the clause is the 13 different Federal Courts of Ap- And, there are some federal statues, Forum/Method of Dispute Resolution phrased and the nature of the dispute, the peal (each covering a geographic region such as the Outer Continental Shelf The second problem area ties directly parties could avoid state court entirely, of the country) have the power to make Lands Act (“OCSLA”) that extend con- into the ? rst – many maritime contracts and also waive the right to a trial by jury.

rules that apply only in their jurisdic- current jurisdiction for state and federal lack either a forum selection clause In an international agreement, many tion. When these courts disagree, what courts, and, depending on the activity, (picking the location of the litigation) parties favor arbitration clauses. There is known as a circuit split exists – and can actually force state law to supplant or an arbitration clause, which are nor- are advantages to arbitration such as sometimes SCOTUS will resolve it, the GML. mally favored in commercial and pas- limitations on discovery and, in the case other times the rules will vary from New Obviously, this overlay of what law senger disputes but are less available in of parties from different countries, it is

York to Texas to California. applies (and the situations in which it the case of injured workers. SCOTUS easier to enforce an arbitration award

Additionally, the SCOTUS decision applies) is vastly different than what is has repeatedly held both of these types than to domesticate a foreign judgment.

in Wilburn Boat in 1955 determined if present in Europe. A good choice of law of clauses to be generally acceptable in a A corollary issue is the use of permis- the GML is silent, state law can “? ll in clause can help the parties avoid most, maritime contract. sive language instead of mandatory lan- the gaps.” So, on top of the federal prec- but not all, of the issues related to which A forum selection clause is usually a guage. I see this often in dispute resolu- 14 Maritime Reporter & Engineering News • NOVEMBER 2019