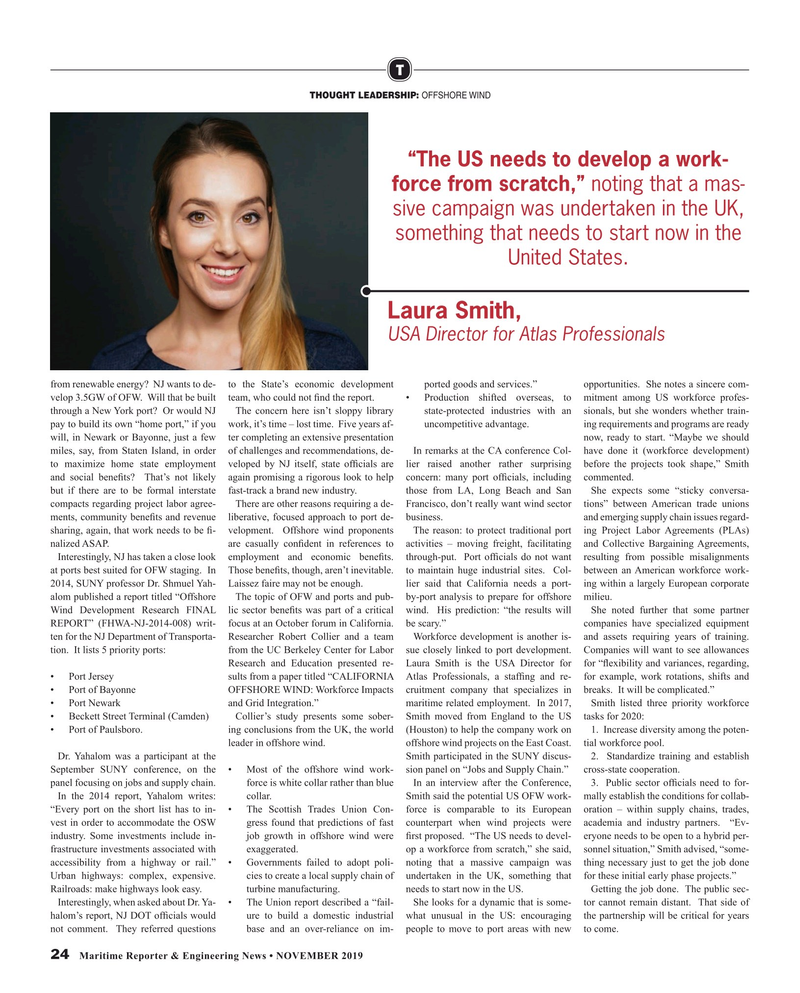 THOUGHT LEADERSHIP: OFFSHORE WIND “The US needs to develop a work- force from scratch,” noting that a mas- sive campaign was undertaken in the UK, something that needs to start now in the

USA Director for Atlas Professionals from renewable energy? NJ wants to de- to the State’s economic development ported goods and services.” opportunities. She notes a sincere com- velop 3.5GW of OFW. Will that be built team, who could not ? nd the report. • Production shifted overseas, to mitment among US workforce profes- through a New York port? Or would NJ The concern here isn’t sloppy library state-protected industries with an sionals, but she wonders whether train- pay to build its own “home port,” if you work, it’s time – lost time. Five years af- uncompetitive advantage. ing requirements and programs are ready will, in Newark or Bayonne, just a few ter completing an extensive presentation now, ready to start. “Maybe we should miles, say, from Staten Island, in order of challenges and recommendations, de- In remarks at the CA conference Col- have done it (workforce development) to maximize home state employment veloped by NJ itself, state of? cials are lier raised another rather surprising before the projects took shape,” Smith and social bene? ts? That’s not likely again promising a rigorous look to help concern: many port of? cials, including commented.

Interestingly, NJ has taken a close look employment and economic bene? ts. through-put. Port of? cials do not want resulting from possible misalignments at ports best suited for OFW staging. In Those bene? ts, though, aren’t inevitable. to maintain huge industrial sites. Col- between an American workforce work- 2014, SUNY professor Dr. Shmuel Yah- Laissez faire may not be enough. lier said that California needs a port- ing within a largely European corporate alom published a report titled “Offshore The topic of OFW and ports and pub- by-port analysis to prepare for offshore milieu.

Wind Development Research FINAL lic sector bene? ts was part of a critical wind. His prediction: “the results will She noted further that some partner

REPORT” (FHWA-NJ-2014-008) writ- focus at an October forum in California. be scary.” companies have specialized equipment ten for the NJ Department of Transporta- Researcher Robert Collier and a team Workforce development is another is- and assets requiring years of training. tion. It lists 5 priority ports: from the UC Berkeley Center for Labor sue closely linked to port development. Companies will want to see allowances

Research and Education presented re- Laura Smith is the USA Director for for “? exibility and variances, regarding, • Port Jersey sults from a paper titled “CALIFORNIA Atlas Professionals, a staf? ng and re- for example, work rotations, shifts and • Port of Bayonne OFFSHORE WIND: Workforce Impacts cruitment company that specializes in breaks. It will be complicated.” • Port Newark and Grid Integration.” maritime related employment. In 2017, Smith listed three priority workforce • Beckett Street Terminal (Camden) Collier’s study presents some sober- Smith moved from England to the US tasks for 2020: • Port of Paulsboro. ing conclusions from the UK, the world (Houston) to help the company work on 1. Increase diversity among the poten- leader in offshore wind. offshore wind projects on the East Coast. tial workforce pool.

Dr. Yahalom was a participant at the Smith participated in the SUNY discus- 2. Standardize training and establish

September SUNY conference, on the • Most of the offshore wind work- sion panel on “Jobs and Supply Chain.” cross-state cooperation.

panel focusing on jobs and supply chain. force is white collar rather than blue In an interview after the Conference, 3. Public sector of? cials need to for-

In the 2014 report, Yahalom writes: collar. Smith said the potential US OFW work- mally establish the conditions for collab- “Every port on the short list has to in- • The Scottish Trades Union Con- force is comparable to its European oration – within supply chains, trades, vest in order to accommodate the OSW gress found that predictions of fast counterpart when wind projects were academia and industry partners. “Ev- industry. Some investments include in- job growth in offshore wind were ? rst proposed. “The US needs to devel- eryone needs to be open to a hybrid per- frastructure investments associated with exaggerated. op a workforce from scratch,” she said, sonnel situation,” Smith advised, “some- accessibility from a highway or rail.” • Governments failed to adopt poli- noting that a massive campaign was thing necessary just to get the job done

Urban highways: complex, expensive. cies to create a local supply chain of undertaken in the UK, something that for these initial early phase projects.”

Railroads: make highways look easy. turbine manufacturing. needs to start now in the US. Getting the job done. The public sec-

Interestingly, when asked about Dr. Ya- • The Union report described a “fail- She looks for a dynamic that is some- tor cannot remain distant. That side of halom’s report, NJ DOT of? cials would ure to build a domestic industrial what unusual in the US: encouraging the partnership will be critical for years not comment. They referred questions base and an over-reliance on im- people to move to port areas with new to come.