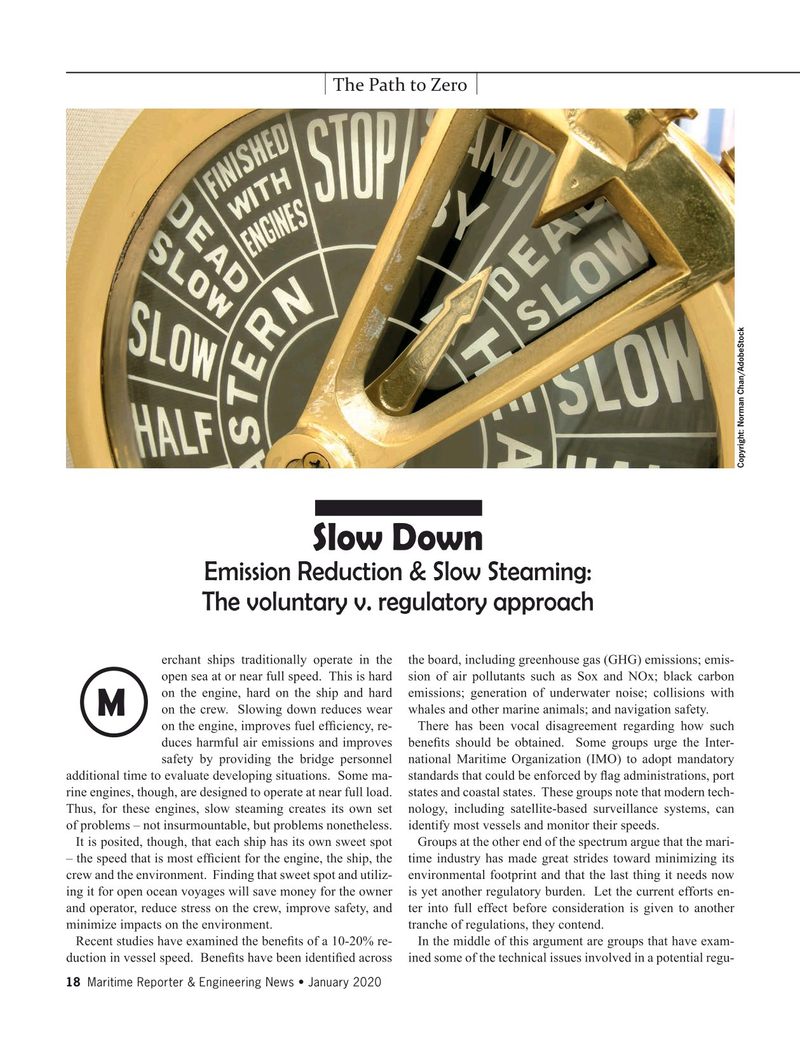 The Path to Zero

The voluntary v. regulatory approach erchant ships traditionally operate in the the board, including greenhouse gas (GHG) emissions; emis- open sea at or near full speed. This is hard sion of air pollutants such as Sox and NOx; black carbon on the engine, hard on the ship and hard emissions; generation of underwater noise; collisions with on the crew. Slowing down reduces wear whales and other marine animals; and navigation safety.

M on the engine, improves fuel ef? ciency, re- There has been vocal disagreement regarding how such duces harmful air emissions and improves bene? ts should be obtained. Some groups urge the Inter- safety by providing the bridge personnel national Maritime Organization (IMO) to adopt mandatory additional time to evaluate developing situations. Some ma- standards that could be enforced by ? ag administrations, port rine engines, though, are designed to operate at near full load. states and coastal states. These groups note that modern tech-

Thus, for these engines, slow steaming creates its own set nology, including satellite-based surveillance systems, can of problems – not insurmountable, but problems nonetheless. identify most vessels and monitor their speeds.

It is posited, though, that each ship has its own sweet spot Groups at the other end of the spectrum argue that the mari- – the speed that is most ef? cient for the engine, the ship, the time industry has made great strides toward minimizing its crew and the environment. Finding that sweet spot and utiliz- environmental footprint and that the last thing it needs now ing it for open ocean voyages will save money for the owner is yet another regulatory burden. Let the current efforts en- and operator, reduce stress on the crew, improve safety, and ter into full effect before consideration is given to another minimize impacts on the environment. tranche of regulations, they contend.

Recent studies have examined the bene? ts of a 10-20% re- In the middle of this argument are groups that have exam- duction in vessel speed. Bene? ts have been identi? ed across ined some of the technical issues involved in a potential regu- 18 Maritime Reporter & Engineering News • January 2020