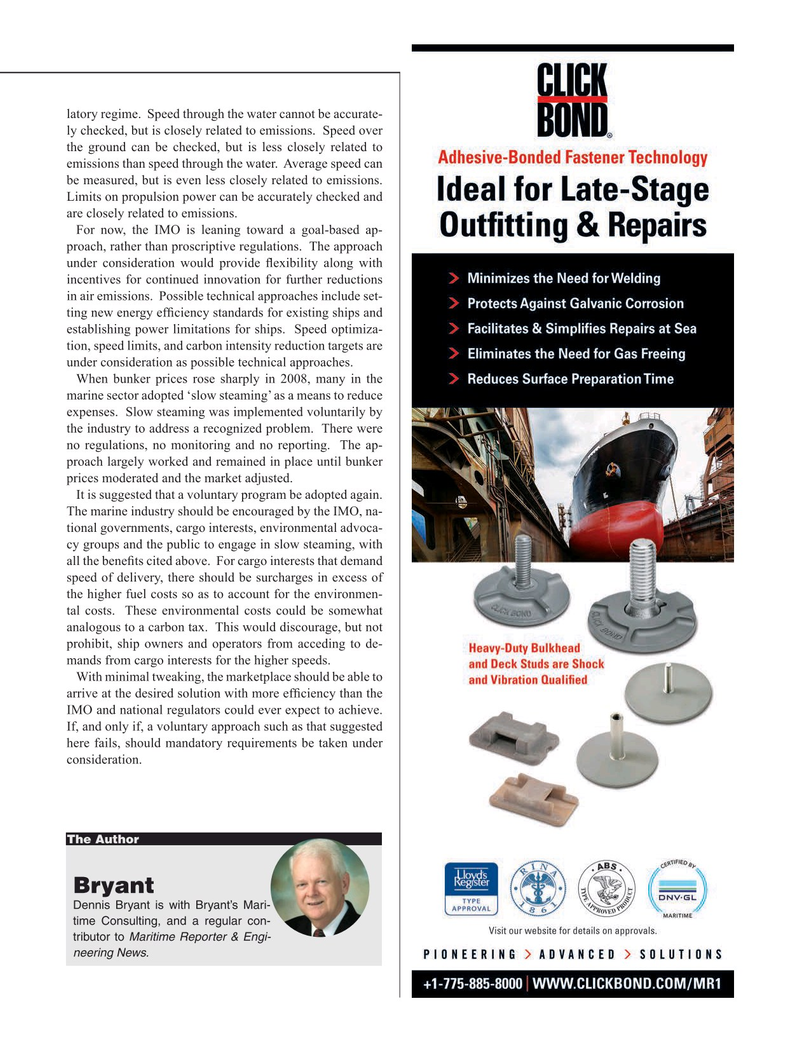 Limits on propulsion power can be accurately checked and are closely related to emissions.

For now, the IMO is leaning toward a goal-based ap- proach, rather than proscriptive regulations. The approach under consideration would provide ? exibility along with incentives for continued innovation for further reductions in air emissions. Possible technical approaches include set- ting new energy ef? ciency standards for existing ships and establishing power limitations for ships. Speed optimiza- tion, speed limits, and carbon intensity reduction targets are under consideration as possible technical approaches.

When bunker prices rose sharply in 2008, many in the marine sector adopted ‘slow steaming’ as a means to reduce expenses. Slow steaming was implemented voluntarily by the industry to address a recognized problem. There were no regulations, no monitoring and no reporting. The ap- proach largely worked and remained in place until bunker prices moderated and the market adjusted.

It is suggested that a voluntary program be adopted again.

The marine industry should be encouraged by the IMO, na- tional governments, cargo interests, environmental advoca- cy groups and the public to engage in slow steaming, with all the bene? ts cited above. For cargo interests that demand speed of delivery, there should be surcharges in excess of the higher fuel costs so as to account for the environmen- tal costs. These environmental costs could be somewhat analogous to a carbon tax. This would discourage, but not prohibit, ship owners and operators from acceding to de- mands from cargo interests for the higher speeds.

With minimal tweaking, the marketplace should be able to arrive at the desired solution with more ef? ciency than the

IMO and national regulators could ever expect to achieve.

If, and only if, a voluntary approach such as that suggested here fails, should mandatory requirements be taken under consideration.