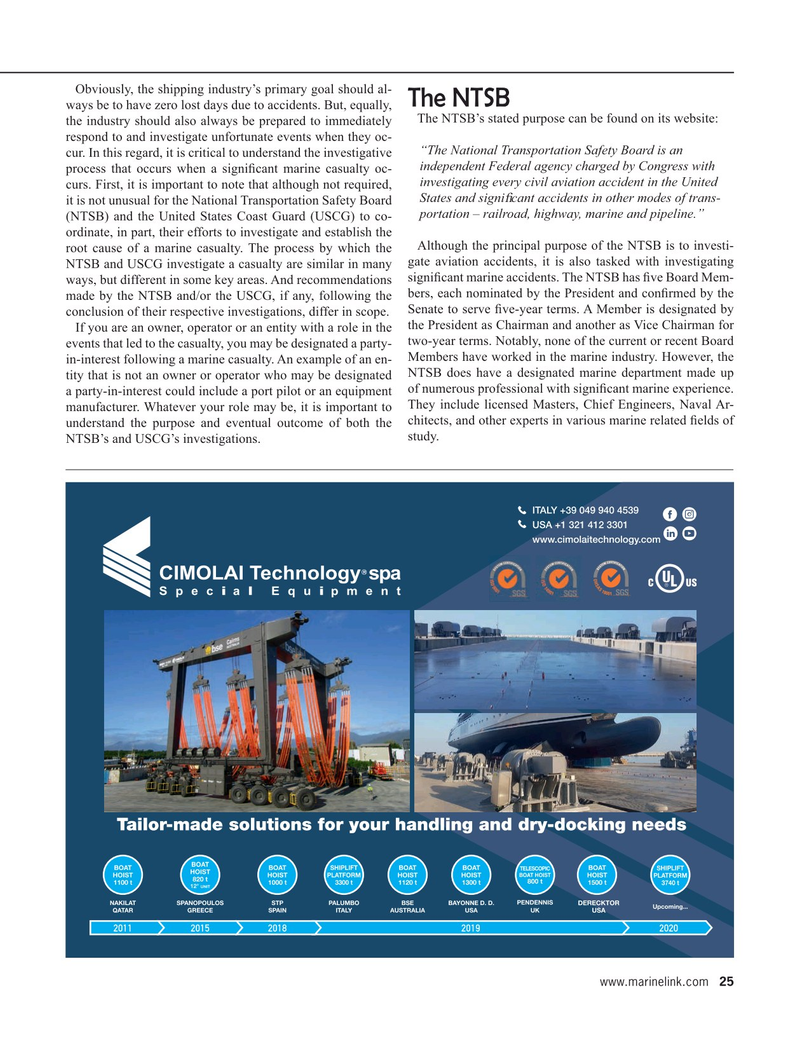 The NTSB ways be to have zero lost days due to accidents. But, equally,

The NTSB’s stated purpose can be found on its website: the industry should also always be prepared to immediately respond to and investigate unfortunate events when they oc- “The National Transportation Safety Board is an cur. In this regard, it is critical to understand the investigative independent Federal agency charged by Congress with process that occurs when a signi? cant marine casualty oc- investigating every civil aviation accident in the United curs. First, it is important to note that although not required,

States and signi? cant accidents in other modes of trans- it is not unusual for the National Transportation Safety Board portation – railroad, highway, marine and pipeline.” (NTSB) and the United States Coast Guard (USCG) to co- ordinate, in part, their efforts to investigate and establish the

Although the principal purpose of the NTSB is to investi- root cause of a marine casualty. The process by which the

NTSB and USCG investigate a casualty are similar in many gate aviation accidents, it is also tasked with investigating ways, but different in some key areas. And recommendations signi? cant marine accidents. The NTSB has ? ve Board Mem- made by the NTSB and/or the USCG, if any, following the bers, each nominated by the President and con? rmed by the

Senate to serve ? ve-year terms. A Member is designated by conclusion of their respective investigations, differ in scope.

If you are an owner, operator or an entity with a role in the the President as Chairman and another as Vice Chairman for two-year terms. Notably, none of the current or recent Board events that led to the casualty, you may be designated a party-

Members have worked in the marine industry. However, the in-interest following a marine casualty. An example of an en- tity that is not an owner or operator who may be designated NTSB does have a designated marine department made up a party-in-interest could include a port pilot or an equipment of numerous professional with signi? cant marine experience. manufacturer. Whatever your role may be, it is important to They include licensed Masters, Chief Engineers, Naval Ar- understand the purpose and eventual outcome of both the chitects, and other experts in various marine related ? elds of study.

Tailor-made solutions for your handling and dry-docking needs