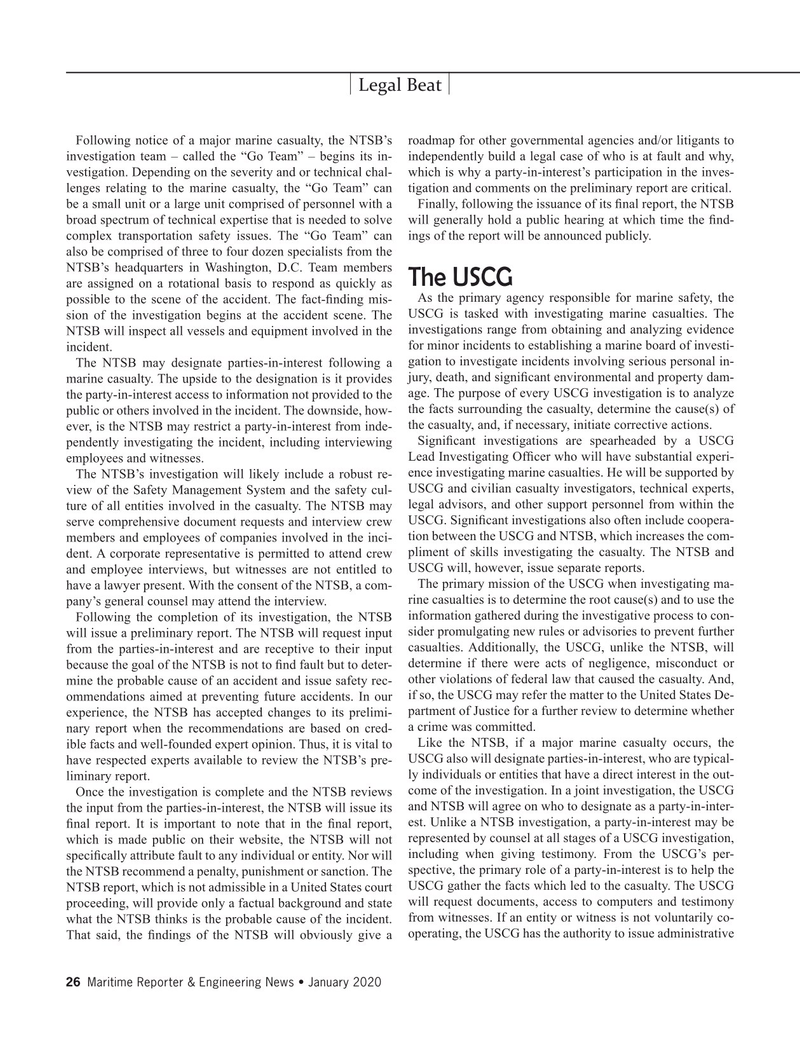 Following notice of a major marine casualty, the NTSB’s roadmap for other governmental agencies and/or litigants to investigation team – called the “Go Team” – begins its in- independently build a legal case of who is at fault and why, vestigation. Depending on the severity and or technical chal- which is why a party-in-interest’s participation in the inves- lenges relating to the marine casualty, the “Go Team” can tigation and comments on the preliminary report are critical.

be a small unit or a large unit comprised of personnel with a Finally, following the issuance of its ? nal report, the NTSB broad spectrum of technical expertise that is needed to solve will generally hold a public hearing at which time the ? nd- complex transportation safety issues. The “Go Team” can ings of the report will be announced publicly. also be comprised of three to four dozen specialists from the

As the primary agency responsible for marine safety, the possible to the scene of the accident. The fact-? nding mis- sion of the investigation begins at the accident scene. The USCG is tasked with investigating marine casualties. The

NTSB will inspect all vessels and equipment involved in the investigations range from obtaining and analyzing evidence for minor incidents to establishing a marine board of investi- incident.

The NTSB may designate parties-in-interest following a gation to investigate incidents involving serious personal in- marine casualty. The upside to the designation is it provides jury, death, and signi? cant environmental and property dam- the party-in-interest access to information not provided to the age. The purpose of every USCG investigation is to analyze the facts surrounding the casualty, determine the cause(s) of public or others involved in the incident. The downside, how- the casualty, and, if necessary, initiate corrective actions. ever, is the NTSB may restrict a party-in-interest from inde-

Signi? cant investigations are spearheaded by a USCG pendently investigating the incident, including interviewing

Lead Investigating Of? cer who will have substantial experi- employees and witnesses. ence investigating marine casualties. He will be supported by

The NTSB’s investigation will likely include a robust re-

USCG and civilian casualty investigators, technical experts, view of the Safety Management System and the safety cul- ture of all entities involved in the casualty. The NTSB may legal advisors, and other support personnel from within the serve comprehensive document requests and interview crew USCG. Signi? cant investigations also often include coopera- tion between the USCG and NTSB, which increases the com- members and employees of companies involved in the inci- dent. A corporate representative is permitted to attend crew pliment of skills investigating the casualty. The NTSB and and employee interviews, but witnesses are not entitled to USCG will, however, issue separate reports.

The primary mission of the USCG when investigating ma- have a lawyer present. With the consent of the NTSB, a com- rine casualties is to determine the root cause(s) and to use the pany’s general counsel may attend the interview.

Following the completion of its investigation, the NTSB information gathered during the investigative process to con- will issue a preliminary report. The NTSB will request input sider promulgating new rules or advisories to prevent further from the parties-in-interest and are receptive to their input casualties. Additionally, the USCG, unlike the NTSB, will determine if there were acts of negligence, misconduct or because the goal of the NTSB is not to ? nd fault but to deter- other violations of federal law that caused the casualty. And, mine the probable cause of an accident and issue safety rec- ommendations aimed at preventing future accidents. In our if so, the USCG may refer the matter to the United States De- partment of Justice for a further review to determine whether experience, the NTSB has accepted changes to its prelimi- a crime was committed. nary report when the recommendations are based on cred-

Like the NTSB, if a major marine casualty occurs, the ible facts and well-founded expert opinion. Thus, it is vital to

USCG also will designate parties-in-interest, who are typical- have respected experts available to review the NTSB’s pre- ly individuals or entities that have a direct interest in the out- liminary report.

NTSB report, which is not admissible in a United States court USCG gather the facts which led to the casualty. The USCG proceeding, will provide only a factual background and state will request documents, access to computers and testimony what the NTSB thinks is the probable cause of the incident. from witnesses. If an entity or witness is not voluntarily co-

That said, the ? ndings of the NTSB will obviously give a operating, the USCG has the authority to issue administrative 26 Maritime Reporter & Engineering News • January 2020