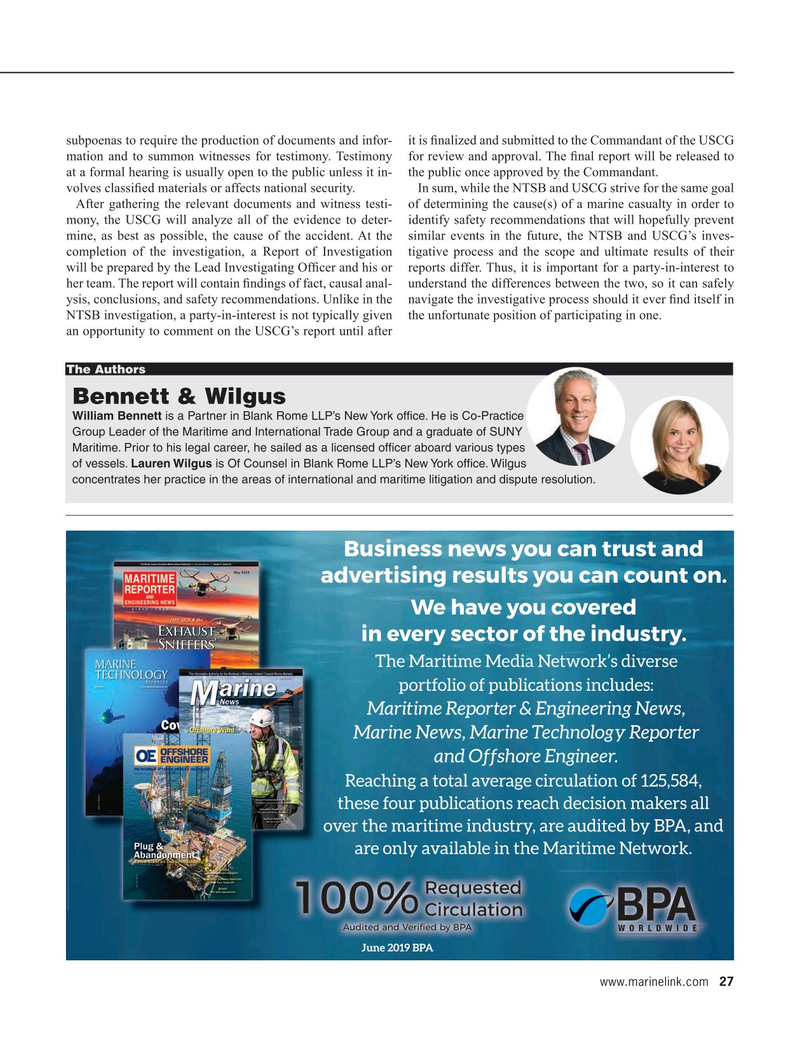 subpoenas to require the production of documents and infor- it is ? nalized and submitted to the Commandant of the USCG mation and to summon witnesses for testimony. Testimony for review and approval. The ? nal report will be released to at a formal hearing is usually open to the public unless it in- the public once approved by the Commandant.

volves classi? ed materials or affects national security. In sum, while the NTSB and USCG strive for the same goal

After gathering the relevant documents and witness testi- of determining the cause(s) of a marine casualty in order to mony, the USCG will analyze all of the evidence to deter- identify safety recommendations that will hopefully prevent mine, as best as possible, the cause of the accident. At the similar events in the future, the NTSB and USCG’s inves- completion of the investigation, a Report of Investigation tigative process and the scope and ultimate results of their will be prepared by the Lead Investigating Of? cer and his or reports differ. Thus, it is important for a party-in-interest to her team. The report will contain ? ndings of fact, causal anal- understand the differences between the two, so it can safely ysis, conclusions, and safety recommendations. Unlike in the navigate the investigative process should it ever ? nd itself in

NTSB investigation, a party-in-interest is not typically given the unfortunate position of participating in one. an opportunity to comment on the USCG’s report until after

William Bennett is a Partner in Blank Rome LLP’s New York of? ce. He is Co-Practice

Maritime. Prior to his legal career, he sailed as a licensed of? cer aboard various types of vessels. Lauren Wilgus is Of Counsel in Blank Rome LLP’s New York of? ce. Wilgus concentrates her practice in the areas of international and maritime litigation and dispute resolution.

Business news you can trust and advertising results you can count on.

We have you covered in every sector of the industry.

Reaching a total average circulation of 125,584, these four publications reach decision makers all over the maritime industry, are audited by BPA, and are only available in the Maritime Network.