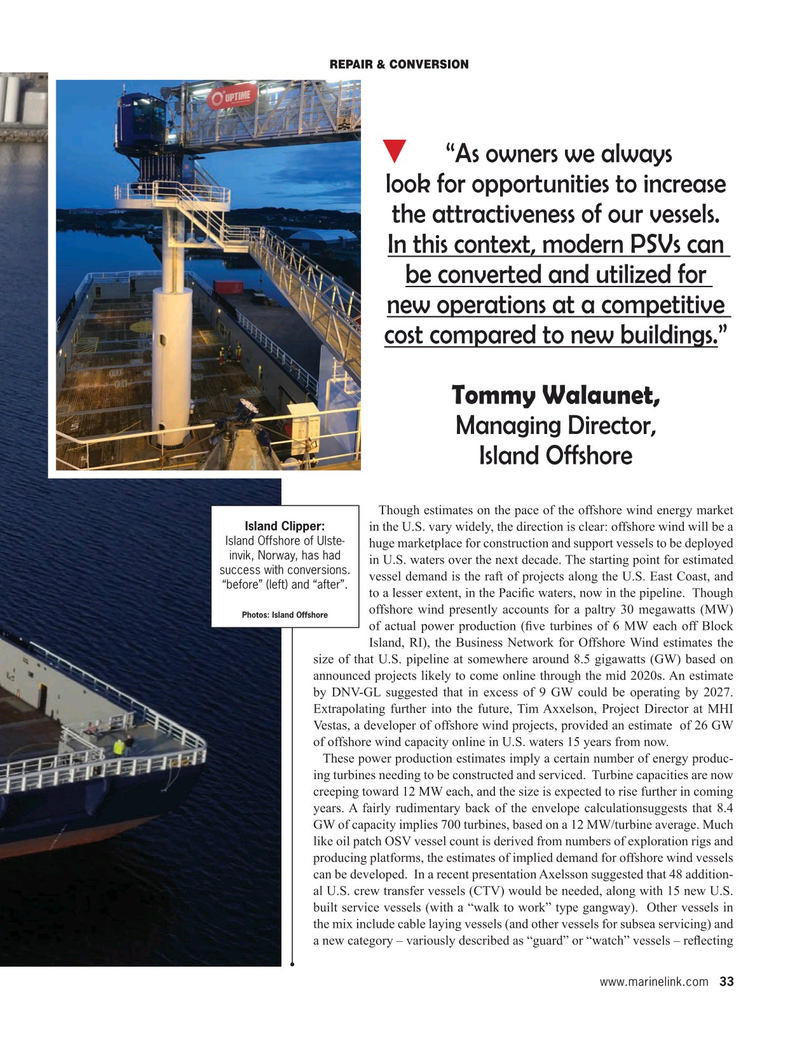 REPAIR & CONVERSION “As owners we always look for opportunities to increase the attractiveness of our vessels.

In this context, modern PSVs can be converted and utilized for new operations at a competitive cost compared to new buildings.”

Though estimates on the pace of the offshore wind energy market

Island Clipper: in the U.S. vary widely, the direction is clear: offshore wind will be a

Island Offshore of Ulste- huge marketplace for construction and support vessels to be deployed invik, Norway, has had in U.S. waters over the next decade. The starting point for estimated success with conversions. vessel demand is the raft of projects along the U.S. East Coast, and “before” (left) and “after”. to a lesser extent, in the Paci? c waters, now in the pipeline. Though offshore wind presently accounts for a paltry 30 megawatts (MW)

Island, RI), the Business Network for Offshore Wind estimates the size of that U.S. pipeline at somewhere around 8.5 gigawatts (GW) based on announced projects likely to come online through the mid 2020s. An estimate by DNV-GL suggested that in excess of 9 GW could be operating by 2027.

These power production estimates imply a certain number of energy produc- ing turbines needing to be constructed and serviced. Turbine capacities are now creeping toward 12 MW each, and the size is expected to rise further in coming years. A fairly rudimentary back of the envelope calculationsuggests that 8.4

GW of capacity implies 700 turbines, based on a 12 MW/turbine average. Much like oil patch OSV vessel count is derived from numbers of exploration rigs and producing platforms, the estimates of implied demand for offshore wind vessels can be developed. In a recent presentation Axelsson suggested that 48 addition- al U.S. crew transfer vessels (CTV) would be needed, along with 15 new U.S. built service vessels (with a “walk to work” type gangway). Other vessels in the mix include cable laying vessels (and other vessels for subsea servicing) and a new category – variously described as “guard” or “watch” vessels – re? ecting www.marinelink.com 33