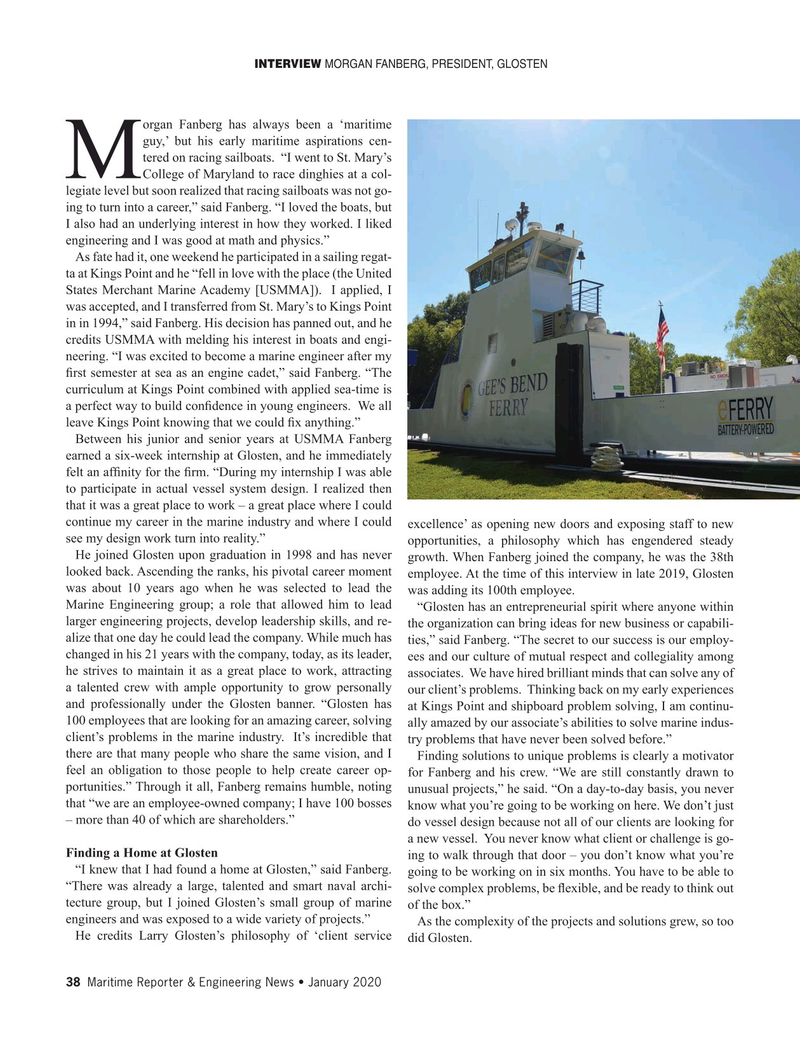 College of Maryland to race dinghies at a col- legiate level but soon realized that racing sailboats was not go- ing to turn into a career,” said Fanberg. “I loved the boats, but

I also had an underlying interest in how they worked. I liked engineering and I was good at math and physics.”

As fate had it, one weekend he participated in a sailing regat- ta at Kings Point and he “fell in love with the place (the United

States Merchant Marine Academy [USMMA]). I applied, I was accepted, and I transferred from St. Mary’s to Kings Point in in 1994,” said Fanberg. His decision has panned out, and he credits USMMA with melding his interest in boats and engi- neering. “I was excited to become a marine engineer after my ? rst semester at sea as an engine cadet,” said Fanberg. “The curriculum at Kings Point combined with applied sea-time is a perfect way to build con? dence in young engineers. We all leave Kings Point knowing that we could ? x anything.”

Between his junior and senior years at USMMA Fanberg earned a six-week internship at Glosten, and he immediately felt an af? nity for the ? rm. “During my internship I was able to participate in actual vessel system design. I realized then that it was a great place to work – a great place where I could continue my career in the marine industry and where I could excellence’ as opening new doors and exposing staff to new see my design work turn into reality.” opportunities, a philosophy which has engendered steady

He joined Glosten upon graduation in 1998 and has never growth. When Fanberg joined the company, he was the 38th looked back. Ascending the ranks, his pivotal career moment employee. At the time of this interview in late 2019, Glosten was about 10 years ago when he was selected to lead the was adding its 100th employee.

Marine Engineering group; a role that allowed him to lead “Glosten has an entrepreneurial spirit where anyone within larger engineering projects, develop leadership skills, and re- the organization can bring ideas for new business or capabili- alize that one day he could lead the company. While much has ties,” said Fanberg. “The secret to our success is our employ- changed in his 21 years with the company, today, as its leader, ees and our culture of mutual respect and collegiality among he strives to maintain it as a great place to work, attracting associates. We have hired brilliant minds that can solve any of a talented crew with ample opportunity to grow personally our client’s problems. Thinking back on my early experiences and professionally under the Glosten banner. “Glosten has at Kings Point and shipboard problem solving, I am continu- 100 employees that are looking for an amazing career, solving ally amazed by our associate’s abilities to solve marine indus- client’s problems in the marine industry. It’s incredible that try problems that have never been solved before.” there are that many people who share the same vision, and I

Finding solutions to unique problems is clearly a motivator feel an obligation to those people to help create career op- for Fanberg and his crew. “We are still constantly drawn to portunities.” Through it all, Fanberg remains humble, noting unusual projects,” he said. “On a day-to-day basis, you never that “we are an employee-owned company; I have 100 bosses know what you’re going to be working on here. We don’t just – more than 40 of which are shareholders.” do vessel design because not all of our clients are looking for a new vessel. You never know what client or challenge is go-

Finding a Home at Glosten ing to walk through that door – you don’t know what you’re “I knew that I had found a home at Glosten,” said Fanberg. going to be working on in six months. You have to be able to “There was already a large, talented and smart naval archi- solve complex problems, be ? exible, and be ready to think out tecture group, but I joined Glosten’s small group of marine of the box.” engineers and was exposed to a wide variety of projects.”

As the complexity of the projects and solutions grew, so too