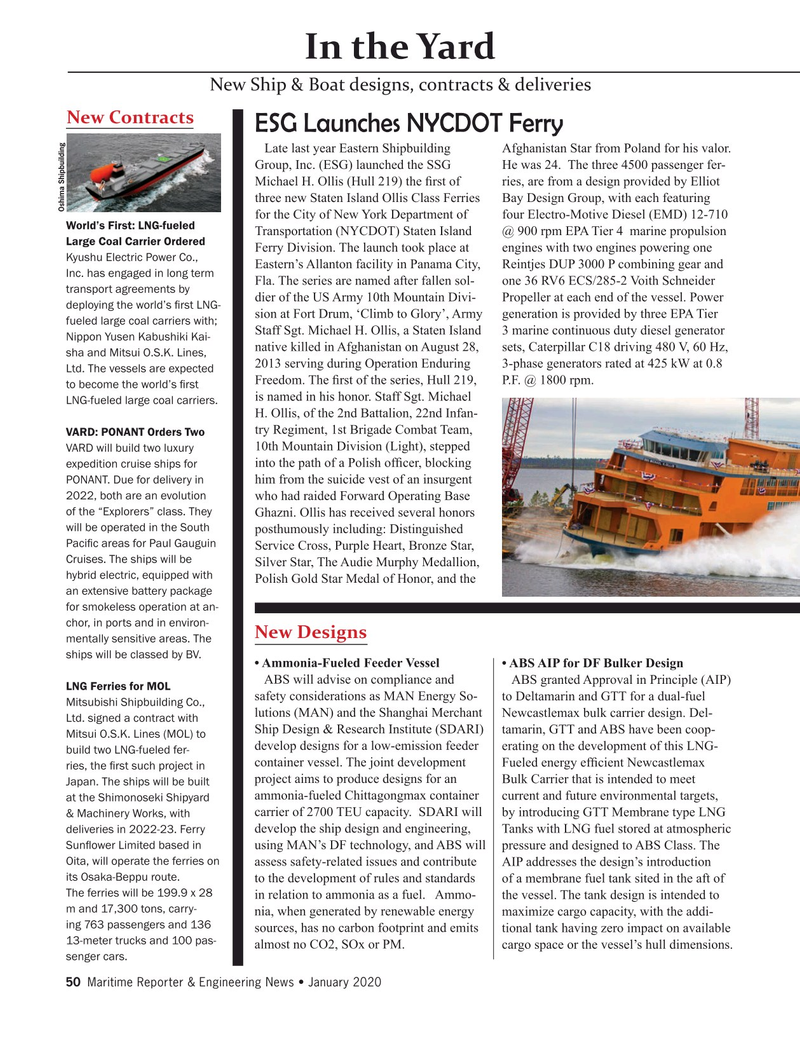 Ferry Division. The launch took place at engines with two engines powering one

Inc. has engaged in long term

Fla. The series are named after fallen sol- one 36 RV6 ECS/285-2 Voith Schneider transport agreements by dier of the US Army 10th Mountain Divi- Propeller at each end of the vessel. Power deploying the world’s ? rst LNG- sion at Fort Drum, ‘Climb to Glory’, Army generation is provided by three EPA Tier fueled large coal carriers with;

Ltd. The vessels are expected

to become the world’s ? rst is named in his honor. Staff Sgt. Michael

VARD will build two luxury into the path of a Polish of? cer, blocking expedition cruise ships for him from the suicide vest of an insurgent

PONANT. Due for delivery in 2022, both are an evolution who had raided Forward Operating Base of the “Explorers” class. They

Ghazni. Ollis has received several honors will be operated in the South posthumously including: Distinguished

Cruises. The ships will be

Polish Gold Star Medal of Honor, and the an extensive battery package for smokeless operation at an- chor, in ports and in environ-

New Designs mentally sensitive areas. The ships will be classed by BV.

Ltd. signed a contract with

Mitsui O.S.K. Lines (MOL) to develop designs for a low-emission feeder erating on the development of this LNG- build two LNG-fueled fer- container vessel. The joint development Fueled energy ef? cient Newcastlemax ries, the ? rst such project in project aims to produce designs for an Bulk Carrier that is intended to meet

Japan. The ships will be built ammonia-fueled Chittagongmax container current and future environmental targets, at the Shimonoseki Shipyard carrier of 2700 TEU capacity. SDARI will by introducing GTT Membrane type LNG & Machinery Works, with develop the ship design and engineering, Tanks with LNG fuel stored at atmospheric deliveries in 2022-23. Ferry

Sun? ower Limited based in using MAN’s DF technology, and ABS will pressure and designed to ABS Class. The

Oita, will operate the ferries on assess safety-related issues and contribute AIP addresses the design’s introduction its Osaka-Beppu route.

The ferries will be 199.9 x 28 in relation to ammonia as a fuel. Ammo- the vessel. The tank design is intended to m and 17,300 tons, carry- nia, when generated by renewable energy maximize cargo capacity, with the addi- ing 763 passengers and 136 sources, has no carbon footprint and emits tional tank having zero impact on available 13-meter trucks and 100 pas- almost no CO2, SOx or PM. cargo space or the vessel’s hull dimensions.