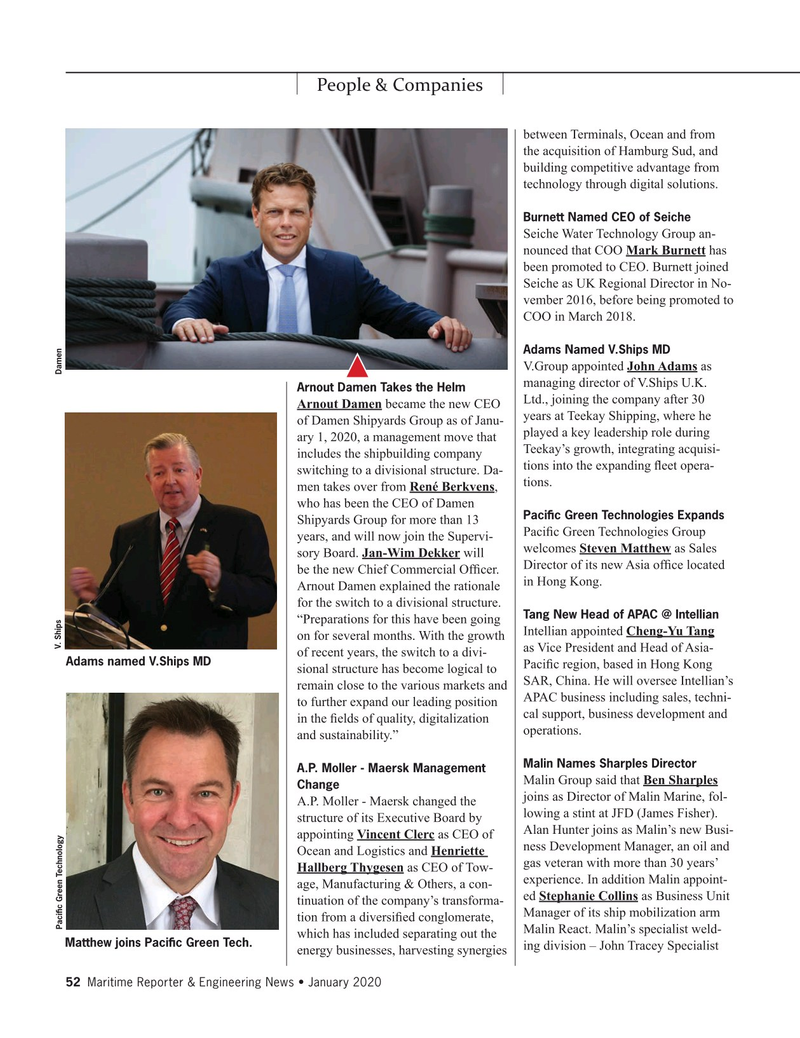 People & Companies between Terminals, Ocean and from the acquisition of Hamburg Sud, and building competitive advantage from technology through digital solutions.

Seiche as UK Regional Director in No- vember 2016, before being promoted to

Ltd., joining the company after 30

Arnout Damen became the new CEO years at Teekay Shipping, where he of Damen Shipyards Group as of Janu- played a key leadership role during ary 1, 2020, a management move that

Teekay’s growth, integrating acquisi- includes the shipbuilding company tions into the expanding ? eet opera- switching to a divisional structure. Da- tions. men takes over from René Berkvens, who has been the CEO of Damen

Shipyards Group for more than 13

Director of its new Asia of? ce located be the new Chief Commercial Of? cer. in Hong Kong.

Arnout Damen explained the rationale for the switch to a divisional structure.

Intellian appointed Cheng-Yu Tang on for several months. With the growth as Vice President and Head of Asia- of recent years, the switch to a divi-

Paci? c region, based in Hong Kong sional structure has become logical to

SAR, China. He will oversee Intellian’s remain close to the various markets and

APAC business including sales, techni- to further expand our leading position cal support, business development and in the ? elds of quality, digitalization operations. and sustainability.”

A.P. Moller - Maersk changed the lowing a stint at JFD (James Fisher). structure of its Executive Board by

Manager of its ship mobilization arm tion from a diversi? ed conglomerate,

Malin React. Malin’s specialist weld- which has included separating out the