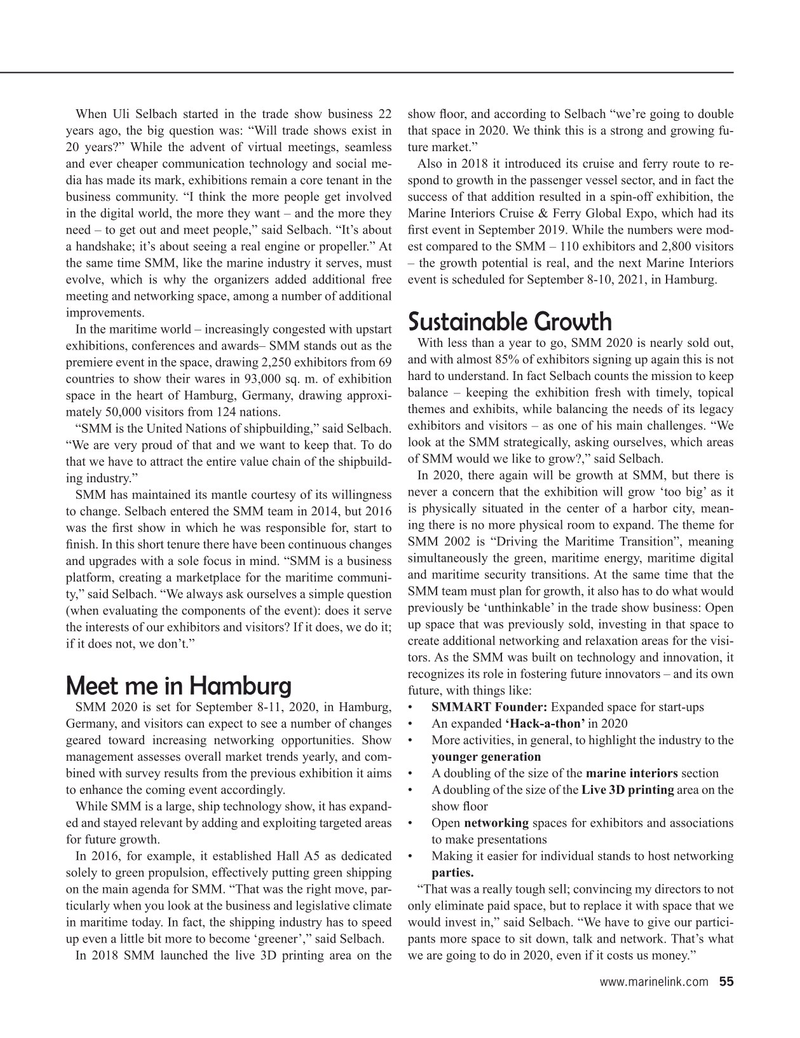 When Uli Selbach started in the trade show business 22 show ? oor, and according to Selbach “we’re going to double years ago, the big question was: “Will trade shows exist in that space in 2020. We think this is a strong and growing fu- 20 years?” While the advent of virtual meetings, seamless ture market.” and ever cheaper communication technology and social me- Also in 2018 it introduced its cruise and ferry route to re- dia has made its mark, exhibitions remain a core tenant in the spond to growth in the passenger vessel sector, and in fact the business community. “I think the more people get involved success of that addition resulted in a spin-off exhibition, the in the digital world, the more they want – and the more they Marine Interiors Cruise & Ferry Global Expo, which had its need – to get out and meet people,” said Selbach. “It’s about ? rst event in September 2019. While the numbers were mod- a handshake; it’s about seeing a real engine or propeller.” At est compared to the SMM – 110 exhibitors and 2,800 visitors the same time SMM, like the marine industry it serves, must – the growth potential is real, and the next Marine Interiors evolve, which is why the organizers added additional free event is scheduled for September 8-10, 2021, in Hamburg.

meeting and networking space, among a number of additional improvements.

In the maritime world – increasingly congested with upstart

With less than a year to go, SMM 2020 is nearly sold out, exhibitions, conferences and awards– SMM stands out as the and with almost 85% of exhibitors signing up again this is not premiere event in the space, drawing 2,250 exhibitors from 69 countries to show their wares in 93,000 sq. m. of exhibition hard to understand. In fact Selbach counts the mission to keep balance – keeping the exhibition fresh with timely, topical space in the heart of Hamburg, Germany, drawing approxi- themes and exhibits, while balancing the needs of its legacy mately 50,000 visitors from 124 nations.

“SMM is the United Nations of shipbuilding,” said Selbach. exhibitors and visitors – as one of his main challenges. “We “We are very proud of that and we want to keep that. To do look at the SMM strategically, asking ourselves, which areas of SMM would we like to grow?,” said Selbach.

In 2020, there again will be growth at SMM, but there is ing industry.”

SMM has maintained its mantle courtesy of its willingness never a concern that the exhibition will grow ‘too big’ as it to change. Selbach entered the SMM team in 2014, but 2016 is physically situated in the center of a harbor city, mean- was the ? rst show in which he was responsible for, start to ing there is no more physical room to expand. The theme for

SMM 2002 is “Driving the Maritime Transition”, meaning ? nish. In this short tenure there have been continuous changes and upgrades with a sole focus in mind. “SMM is a business simultaneously the green, maritime energy, maritime digital and maritime security transitions. At the same time that the platform, creating a marketplace for the maritime communi- ty,” said Selbach. “We always ask ourselves a simple question SMM team must plan for growth, it also has to do what would (when evaluating the components of the event): does it serve previously be ‘unthinkable’ in the trade show business: Open the interests of our exhibitors and visitors? If it does, we do it; up space that was previously sold, investing in that space to create additional networking and relaxation areas for the visi- if it does not, we don’t.” tors. As the SMM was built on technology and innovation, it recognizes its role in fostering future innovators – and its own

Germany, and visitors can expect to see a number of changes • An expanded ‘Hack-a-thon’ in 2020 geared toward increasing networking opportunities. Show • More activities, in general, to highlight the industry to the management assesses overall market trends yearly, and com- younger generation bined with survey results from the previous exhibition it aims • A doubling of the size of the marine interiors section to enhance the coming event accordingly. • A doubling of the size of the Live 3D printing area on the

While SMM is a large, ship technology show, it has expand- show ? oor ed and stayed relevant by adding and exploiting targeted areas • Open networking spaces for exhibitors and associations for future growth. to make presentations

In 2016, for example, it established Hall A5 as dedicated • Making it easier for individual stands to host networking solely to green propulsion, effectively putting green shipping parties.

on the main agenda for SMM. “That was the right move, par- “That was a really tough sell; convincing my directors to not ticularly when you look at the business and legislative climate only eliminate paid space, but to replace it with space that we in maritime today. In fact, the shipping industry has to speed would invest in,” said Selbach. “We have to give our partici- up even a little bit more to become ‘greener’,” said Selbach. pants more space to sit down, talk and network. That’s what