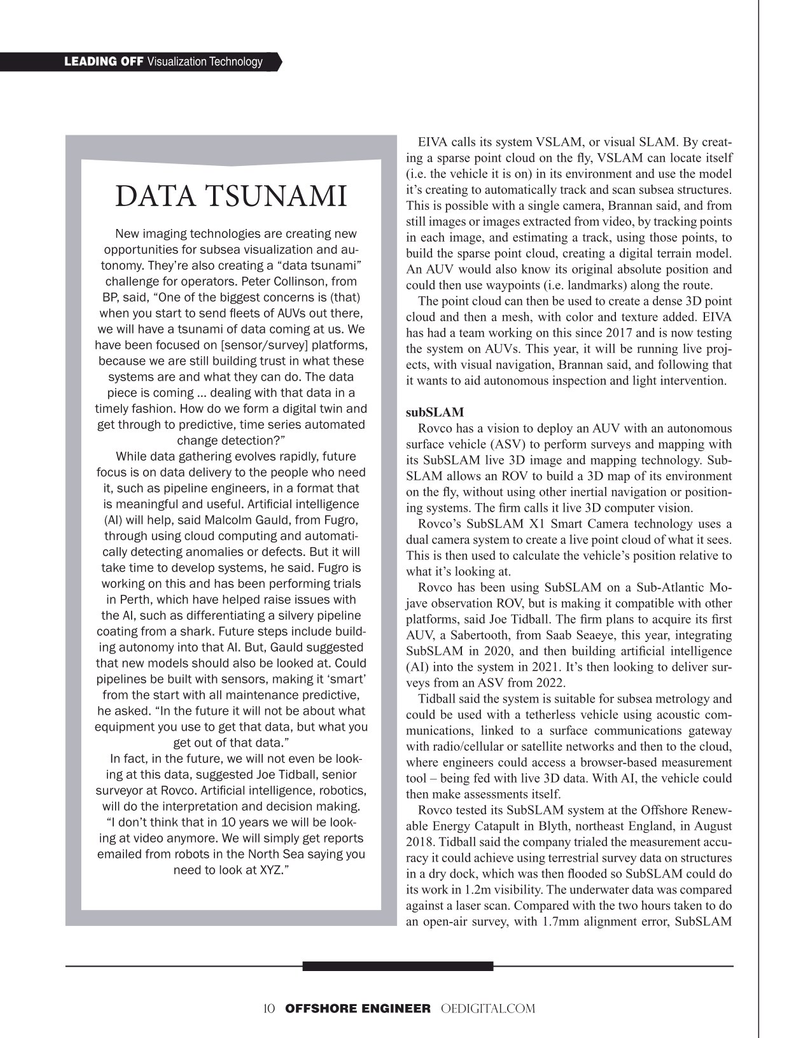 EIVA calls its system VSLAM, or visual SLAM. By creat- ing a sparse point cloud on the ? y, VSLAM can locate itself (i.e. the vehicle it is on) in its environment and use the model it’s creating to automatically track and scan subsea structures.

This is possible with a single camera, Brannan said, and from still images or images extracted from video, by tracking points

New imaging technologies are creating new in each image, and estimating a track, using those points, to opportunities for subsea visualization and au- build the sparse point cloud, creating a digital terrain model. tonomy. They’re also creating a “data tsunami”

An AUV would also know its original absolute position and challenge for operators. Peter Collinson, from could then use waypoints (i.e. landmarks) along the route.

BP, said, “One of the biggest concerns is (that)

The point cloud can then be used to create a dense 3D point when you start to send ? eets of AUVs out there, cloud and then a mesh, with color and texture added. EIVA we will have a tsunami of data coming at us. We has had a team working on this since 2017 and is now testing have been focused on [sensor/survey] platforms, the system on AUVs. This year, it will be running live proj- because we are still building trust in what these ects, with visual navigation, Brannan said, and following that systems are and what they can do. The data it wants to aid autonomous inspection and light intervention. piece is coming … dealing with that data in a timely fashion. How do we form a digital twin and subSLAM get through to predictive, time series automated

Rovco has a vision to deploy an AUV with an autonomous change detection?” surface vehicle (ASV) to perform surveys and mapping with

While data gathering evolves rapidly, future its SubSLAM live 3D image and mapping technology. Sub- focus is on data delivery to the people who need

SLAM allows an ROV to build a 3D map of its environment it, such as pipeline engineers, in a format that on the ? y, without using other inertial navigation or position- is meaningful and useful. Arti? cial intelligence ing systems. The ? rm calls it live 3D computer vision. (AI) will help, said Malcolm Gauld, from Fugro,

Rovco’s SubSLAM X1 Smart Camera technology uses a through using cloud computing and automati- dual camera system to create a live point cloud of what it sees. cally detecting anomalies or defects. But it will

This is then used to calculate the vehicle’s position relative to take time to develop systems, he said. Fugro is what it’s looking at.

working on this and has been performing trials

Rovco has been using SubSLAM on a Sub-Atlantic Mo- in Perth, which have helped raise issues with jave observation ROV, but is making it compatible with other the AI, such as differentiating a silvery pipeline platforms, said Joe Tidball. The ? rm plans to acquire its ? rst coating from a shark. Future steps include build-

AUV, a Sabertooth, from Saab Seaeye, this year, integrating ing autonomy into that AI. But, Gauld suggested

SubSLAM in 2020, and then building arti? cial intelligence that new models should also be looked at. Could (AI) into the system in 2021. It’s then looking to deliver sur- pipelines be built with sensors, making it ‘smart’ veys from an ASV from 2022. from the start with all maintenance predictive,

Tidball said the system is suitable for subsea metrology and he asked. “In the future it will not be about what could be used with a tetherless vehicle using acoustic com- equipment you use to get that data, but what you munications, linked to a surface communications gateway get out of that data.” with radio/cellular or satellite networks and then to the cloud,

In fact, in the future, we will not even be look- where engineers could access a browser-based measurement ing at this data, suggested Joe Tidball, senior tool – being fed with live 3D data. With AI, the vehicle could surveyor at Rovco. Arti? cial intelligence, robotics, then make assessments itself. will do the interpretation and decision making.

Rovco tested its SubSLAM system at the Offshore Renew- “I don’t think that in 10 years we will be look- able Energy Catapult in Blyth, northeast England, in August ing at video anymore. We will simply get reports 2018. Tidball said the company trialed the measurement accu- emailed from robots in the North Sea saying you racy it could achieve using terrestrial survey data on structures need to look at XYZ.” in a dry dock, which was then ? ooded so SubSLAM could do its work in 1.2m visibility. The underwater data was compared against a laser scan. Compared with the two hours taken to do an open-air survey, with 1.7mm alignment error, SubSLAM 10 OFFSHORE ENGINEER OEDIGITAL.COM 1-17 OE 2019.indd 10 1-17 OE 2019.indd 10 1/21/2019 3:59:24 PM1/21/2019 3:59:24 PM