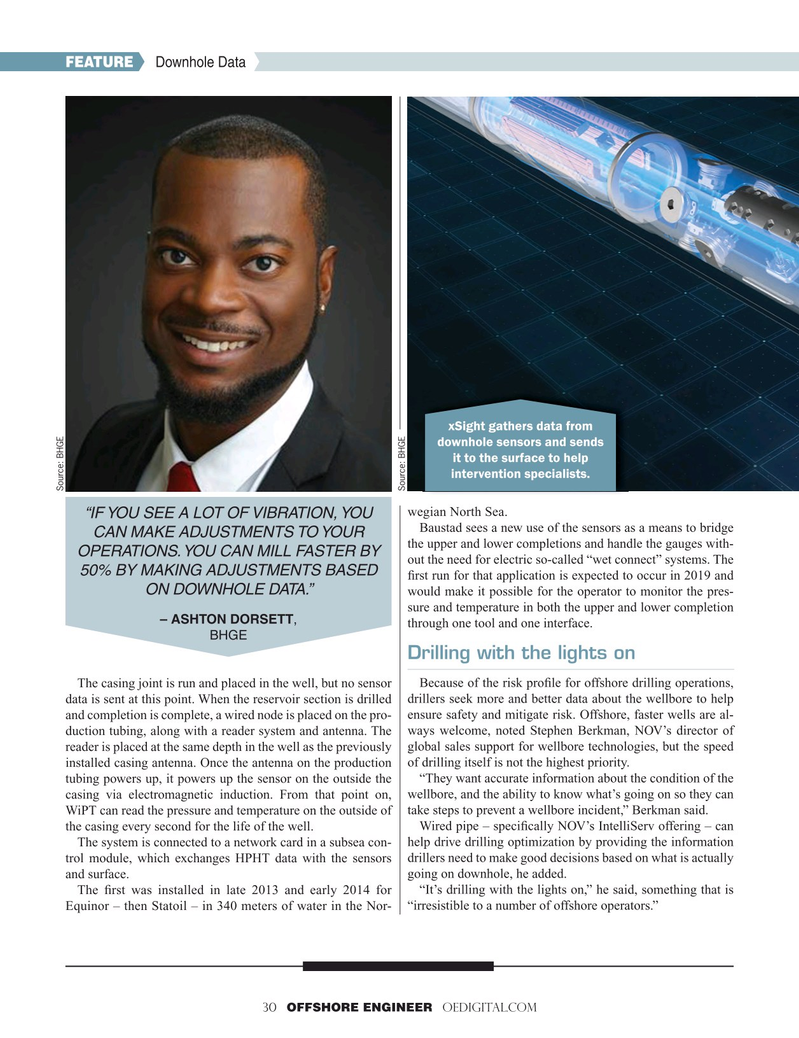 FEATURE Do wnhole Data xSight gathers data from downhole sensors and sends it to the surface to help intervention specialists.

“IF YOU SEE A LOT OF VIBRATION, YOU

OPERATIONS. YOU CAN MILL FASTER BY out the need for electric so-called “wet connect” systems. The 50% BY MAKING ADJUSTMENTS BASED ? rst run for that application is expected to occur in 2019 and

ON DOWNHOLE DATA.” would make it possible for the operator to monitor the pres- sure and temperature in both the upper and lower completion – ASHTON DORSETT, through one tool and one interface.

Drilling with the lights on

The casing joint is run and placed in the well, but no sensor Because of the risk pro? le for offshore drilling operations, data is sent at this point. When the reservoir section is drilled drillers seek more and better data about the wellbore to help and completion is complete, a wired node is placed on the pro- ensure safety and mitigate risk. Offshore, faster wells are al- duction tubing, along with a reader system and antenna. The ways welcome, noted Stephen Berkman, NOV’s director of reader is placed at the same depth in the well as the previously global sales support for wellbore technologies, but the speed installed casing antenna. Once the antenna on the production of drilling itself is not the highest priority.

tubing powers up, it powers up the sensor on the outside the “They want accurate information about the condition of the casing via electromagnetic induction. From that point on, wellbore, and the ability to know what’s going on so they can

WiPT can read the pressure and temperature on the outside of take steps to prevent a wellbore incident,” Berkman said.

the casing every second for the life of the well. Wired pipe – speci? cally NOV’s IntelliServ offering – can

The system is connected to a network card in a subsea con- help drive drilling optimization by providing the information trol module, which exchanges HPHT data with the sensors drillers need to make good decisions based on what is actually and surface. going on downhole, he added.