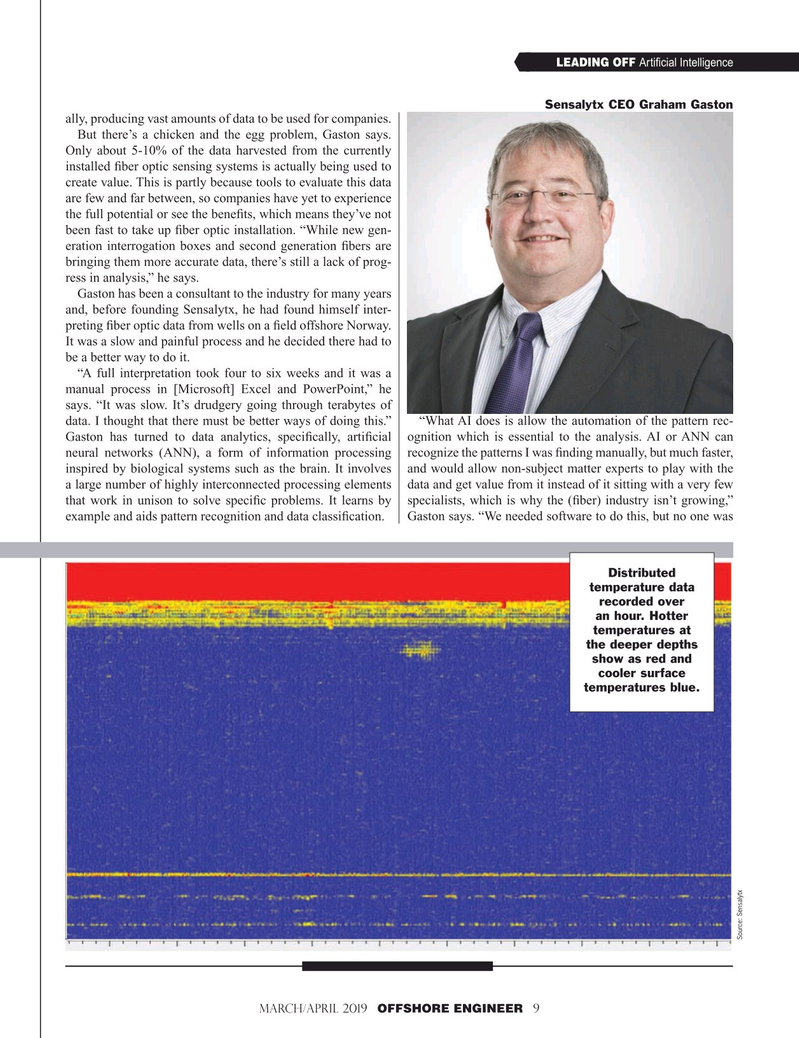 But there’s a chicken and the egg problem, Gaston says.

Only about 5-10% of the data harvested from the currently installed ? ber optic sensing systems is actually being used to create value. This is partly because tools to evaluate this data are few and far between, so companies have yet to experience the full potential or see the bene? ts, which means they’ve not been fast to take up ? ber optic installation. “While new gen- eration interrogation boxes and second generation ? bers are bringing them more accurate data, there’s still a lack of prog- ress in analysis,” he says.

Gaston has been a consultant to the industry for many years and, before founding Sensalytx, he had found himself inter- preting ? ber optic data from wells on a ? eld offshore Norway.

It was a slow and painful process and he decided there had to be a better way to do it. “A full interpretation took four to six weeks and it was a manual process in [Microsoft] Excel and PowerPoint,” he says. “It was slow. It’s drudgery going through terabytes of data. I thought that there must be better ways of doing this.” “What AI does is allow the automation of the pattern rec-

Gaston has turned to data analytics, speci? cally, arti? cial ognition which is essential to the analysis. AI or ANN can neural networks (ANN), a form of information processing recognize the patterns I was ? nding manually, but much faster, inspired by biological systems such as the brain. It involves and would allow non-subject matter experts to play with the a large number of highly interconnected processing elements data and get value from it instead of it sitting with a very few that work in unison to solve speci? c problems. It learns by specialists, which is why the (? ber) industry isn’t growing,” example and aids pattern recognition and data classi? cation. Gaston says. “We needed software to do this, but no one was