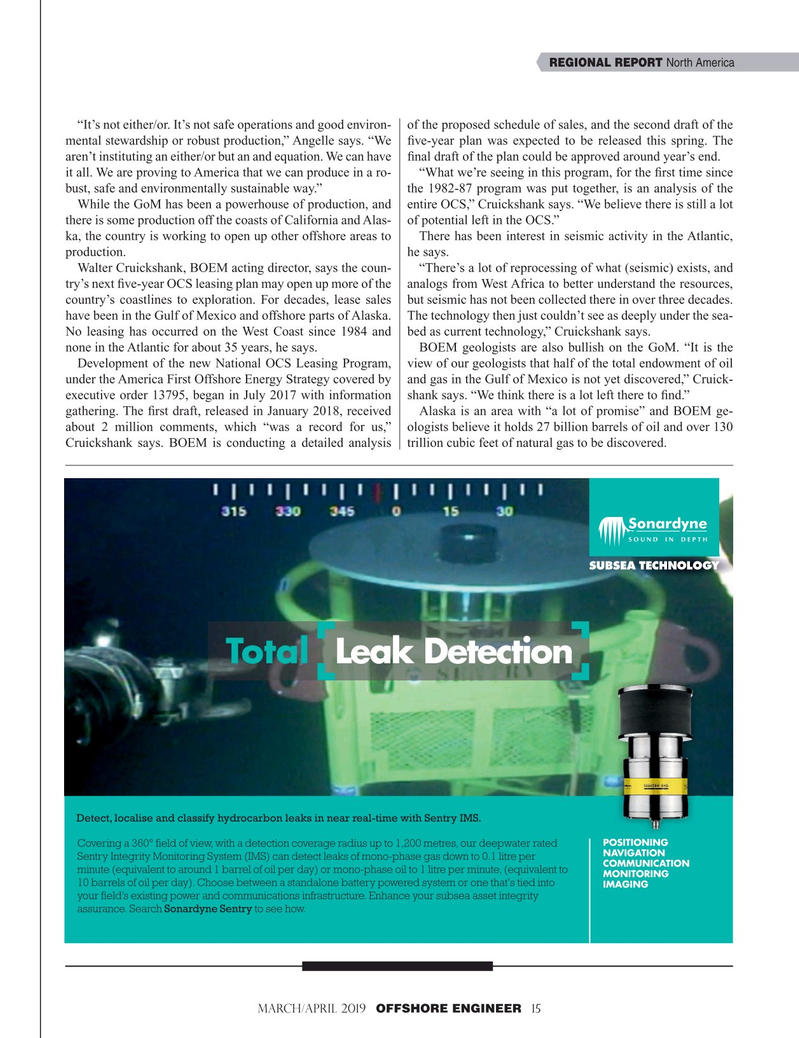 REGIONAL REPORT North America “It’s not either/or. It’s not safe operations and good environ- of the proposed schedule of sales, and the second draft of the mental stewardship or robust production,” Angelle says. “We ? ve-year plan was expected to be released this spring. The aren’t instituting an either/or but an and equation. We can have ? nal draft of the plan could be approved around year’s end.

it all. We are proving to America that we can produce in a ro- “What we’re seeing in this program, for the ? rst time since bust, safe and environmentally sustainable way.” the 1982-87 program was put together, is an analysis of the

While the GoM has been a powerhouse of production, and entire OCS,” Cruickshank says. “We believe there is still a lot there is some production off the coasts of California and Alas- of potential left in the OCS.” ka, the country is working to open up other offshore areas to There has been interest in seismic activity in the Atlantic, production. he says.

Walter Cruickshank, BOEM acting director, says the coun- “There’s a lot of reprocessing of what (seismic) exists, and try’s next ? ve-year OCS leasing plan may open up more of the analogs from West Africa to better understand the resources, country’s coastlines to exploration. For decades, lease sales but seismic has not been collected there in over three decades. have been in the Gulf of Mexico and offshore parts of Alaska. The technology then just couldn’t see as deeply under the sea-

No leasing has occurred on the West Coast since 1984 and bed as current technology,” Cruickshank says.

none in the Atlantic for about 35 years, he says. BOEM geologists are also bullish on the GoM. “It is the

Development of the new National OCS Leasing Program, view of our geologists that half of the total endowment of oil under the America First Offshore Energy Strategy covered by and gas in the Gulf of Mexico is not yet discovered,” Cruick- executive order 13795, began in July 2017 with information shank says. “We think there is a lot left there to ? nd.” gathering. The ? rst draft, released in January 2018, received Alaska is an area with “a lot of promise” and BOEM ge- about 2 million comments, which “was a record for us,” ologists believe it holds 27 billion barrels of oil and over 130