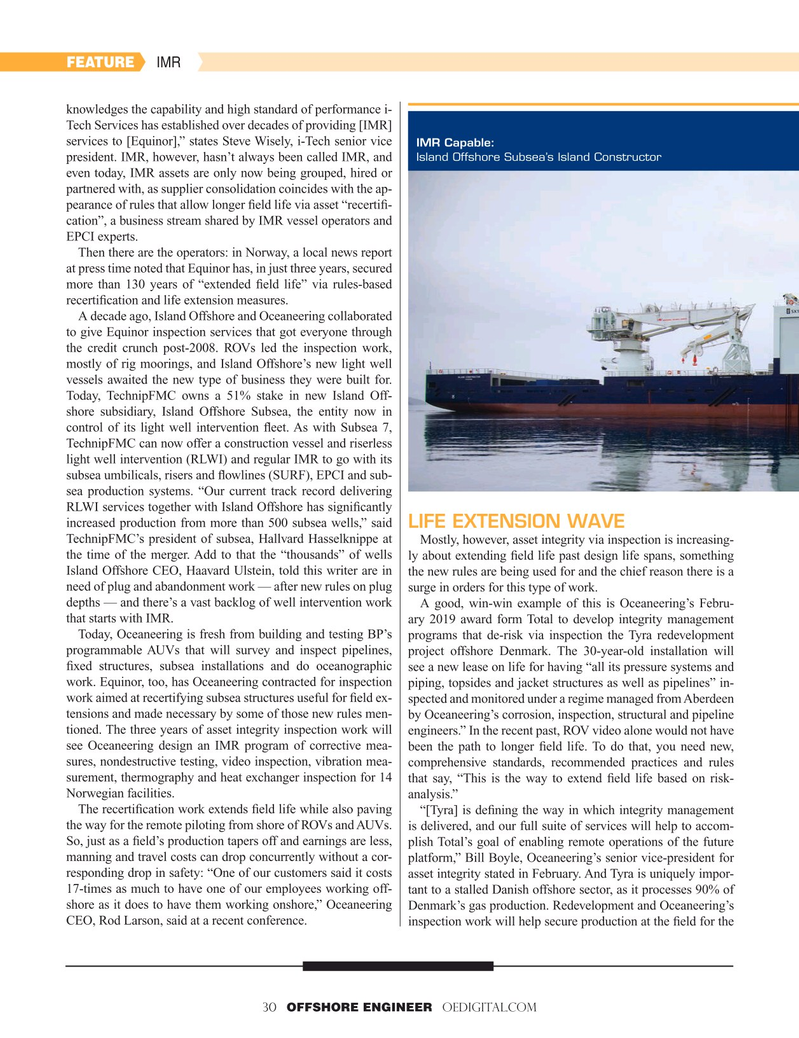 FEATURE IMR knowledges the capability and high standard of performance i-

Island Offshore Subsea’s Island Constructor president. IMR, however, hasn’t always been called IMR, and even today, IMR assets are only now being grouped, hired or partnered with, as supplier consolidation coincides with the ap- pearance of rules that allow longer ? eld life via asset “recerti? - cation”, a business stream shared by IMR vessel operators and

Then there are the operators: in Norway, a local news report at press time noted that Equinor has, in just three years, secured more than 130 years of “extended ? eld life” via rules-based recerti? cation and life extension measures.

A decade ago, Island Offshore and Oceaneering collaborated to give Equinor inspection services that got everyone through the credit crunch post-2008. ROVs led the inspection work, mostly of rig moorings, and Island Offshore’s new light well vessels awaited the new type of business they were built for.

Today, TechnipFMC owns a 51% stake in new Island Off- shore subsidiary, Island Offshore Subsea, the entity now in control of its light well intervention ? eet. As with Subsea 7,

TechnipFMC’s president of subsea, Hallvard Hasselknippe at Mostly, however, asset integrity via inspection is increasing- the time of the merger. Add to that the “thousands” of wells ly about extending ? eld life past design life spans, something

Island Offshore CEO, Haavard Ulstein, told this writer are in the new rules are being used for and the chief reason there is a need of plug and abandonment work — after new rules on plug surge in orders for this type of work.

depths — and there’s a vast backlog of well intervention work A good, win-win example of this is Oceaneering’s Febru- that starts with IMR. ary 2019 award form Total to develop integrity management

Today, Oceaneering is fresh from building and testing BP’s programs that de-risk via inspection the Tyra redevelopment programmable AUVs that will survey and inspect pipelines, project offshore Denmark. The 30-year-old installation will ? xed structures, subsea installations and do oceanographic see a new lease on life for having “all its pressure systems and work. Equinor, too, has Oceaneering contracted for inspection piping, topsides and jacket structures as well as pipelines” in- work aimed at recertifying subsea structures useful for ? eld ex- spected and monitored under a regime managed from Aberdeen tensions and made necessary by some of those new rules men- by Oceaneering’s corrosion, inspection, structural and pipeline tioned. The three years of asset integrity inspection work will engineers.” In the recent past, ROV video alone would not have see Oceaneering design an IMR program of corrective mea- been the path to longer ? eld life. To do that, you need new, sures, nondestructive testing, video inspection, vibration mea- comprehensive standards, recommended practices and rules surement, thermography and heat exchanger inspection for 14 that say, “This is the way to extend ? eld life based on risk-

The recerti? cation work extends ? eld life while also paving “[Tyra] is de? ning the way in which integrity management the way for the remote piloting from shore of ROVs and AUVs. is delivered, and our full suite of services will help to accom-

So, just as a ? eld’s production tapers off and earnings are less, plish Total’s goal of enabling remote operations of the future manning and travel costs can drop concurrently without a cor- platform,” Bill Boyle, Oceaneering’s senior vice-president for responding drop in safety: “One of our customers said it costs asset integrity stated in February. And Tyra is uniquely impor- 17-times as much to have one of our employees working off- tant to a stalled Danish offshore sector, as it processes 90% of shore as it does to have them working onshore,” Oceaneering Denmark’s gas production. Redevelopment and Oceaneering’s