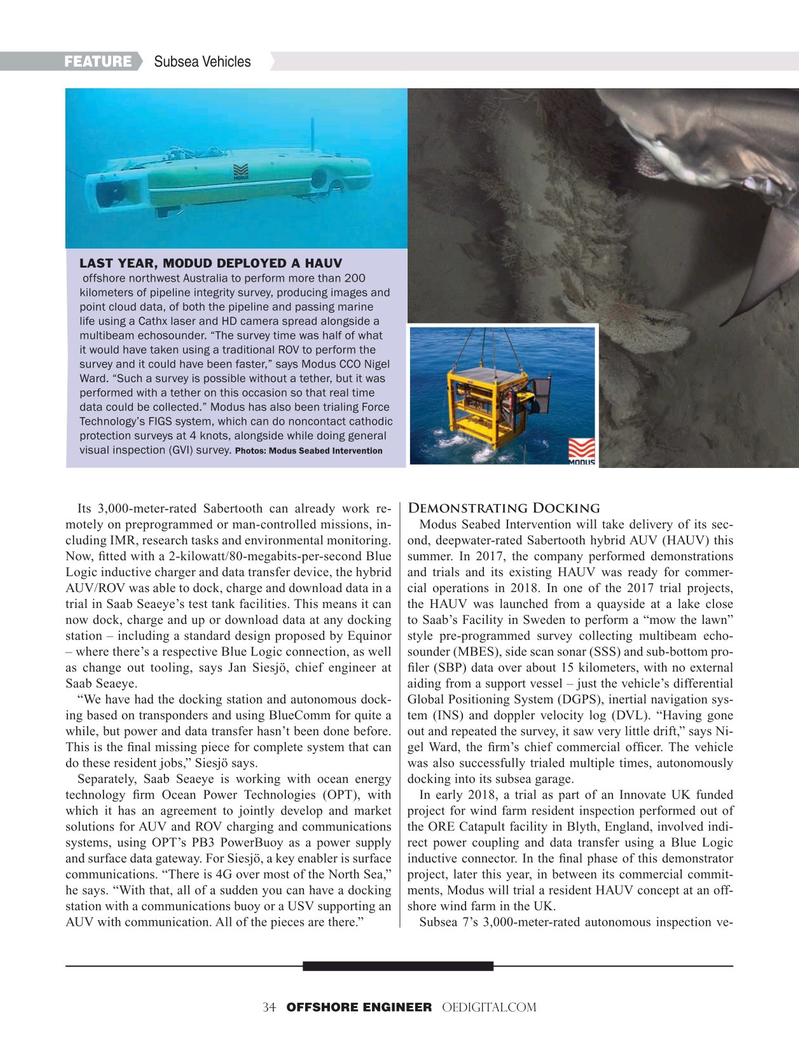 LAST YEAR, MODUD DEPLOYED A HAUV offshore northwest Australia to perform more than 200 kilometers of pipeline integrity survey, producing images and point cloud data, of both the pipeline and passing marine life using a Cathx laser and HD camera spread alongside a multibeam echosounder. “The survey time was half of what it would have taken using a traditional ROV to perform the survey and it could have been faster,” says Modus CCO Nigel

Ward. “Such a survey is possible without a tether, but it was performed with a tether on this occasion so that real time data could be collected.” Modus has also been trialing Force

Technology’s FIGS system, which can do noncontact cathodic protection surveys at 4 knots, alongside while doing general visual inspection (GVI) survey.

Now, ? tted with a 2-kilowatt/80-megabits-per-second Blue summer. In 2017, the company performed demonstrations

Logic inductive charger and data transfer device, the hybrid and trials and its existing HAUV was ready for commer-

AUV/ROV was able to dock, charge and download data in a cial operations in 2018. In one of the 2017 trial projects, trial in Saab Seaeye’s test tank facilities. This means it can the HAUV was launched from a quayside at a lake close now dock, charge and up or download data at any docking to Saab’s Facility in Sweden to perform a “mow the lawn” station – including a standard design proposed by Equinor style pre-programmed survey collecting multibeam echo- – where there’s a respective Blue Logic connection, as well sounder (MBES), side scan sonar (SSS) and sub-bottom pro- as change out tooling, says Jan Siesjö, chief engineer at ? ler (SBP) data over about 15 kilometers, with no external

Saab Seaeye. aiding from a support vessel – just the vehicle’s differential “We have had the docking station and autonomous dock- Global Positioning System (DGPS), inertial navigation sys- ing based on transponders and using BlueComm for quite a tem (INS) and doppler velocity log (DVL). “Having gone while, but power and data transfer hasn’t been done before. out and repeated the survey, it saw very little drift,” says Ni-

This is the ? nal missing piece for complete system that can gel Ward, the ? rm’s chief commercial of? cer. The vehicle do these resident jobs,” Siesjö says. was also successfully trialed multiple times, autonomously

Separately, Saab Seaeye is working with ocean energy docking into its subsea garage. technology ? rm Ocean Power Technologies (OPT), with In early 2018, a trial as part of an Innovate UK funded which it has an agreement to jointly develop and market project for wind farm resident inspection performed out of solutions for AUV and ROV charging and communications the ORE Catapult facility in Blyth, England, involved indi- systems, using OPT’s PB3 PowerBuoy as a power supply rect power coupling and data transfer using a Blue Logic and surface data gateway. For Siesjö, a key enabler is surface inductive connector. In the ? nal phase of this demonstrator communications. “There is 4G over most of the North Sea,” project, later this year, in between its commercial commit- he says. “With that, all of a sudden you can have a docking ments, Modus will trial a resident HAUV concept at an off- station with a communications buoy or a USV supporting an shore wind farm in the UK.