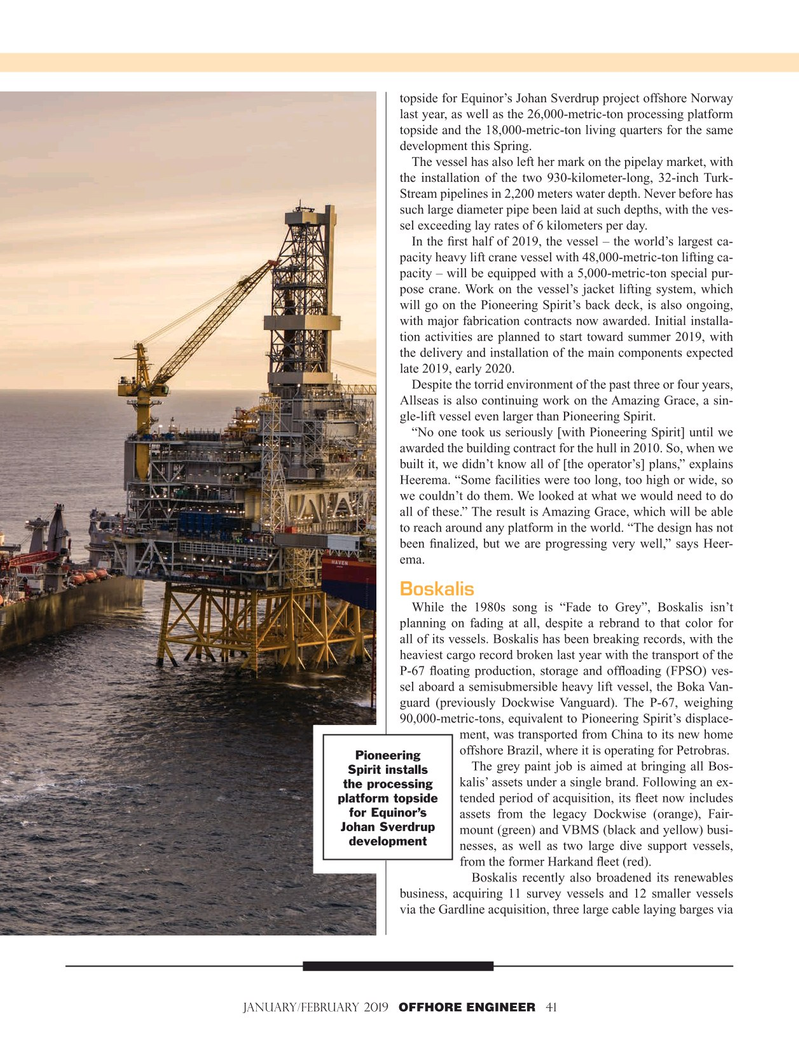 topside for Equinor’s Johan Sverdrup project offshore Norway last year, as well as the 26,000-metric-ton processing platform topside and the 18,000-metric-ton living quarters for the same development this Spring.

The vessel has also left her mark on the pipelay market, with the installation of the two 930-kilometer-long, 32-inch Turk-

Stream pipelines in 2,200 meters water depth. Never before has such large diameter pipe been laid at such depths, with the ves- sel exceeding lay rates of 6 kilometers per day.

In the ? rst half of 2019, the vessel – the world’s largest ca- pacity heavy lift crane vessel with 48,000-metric-ton lifting ca- pacity – will be equipped with a 5,000-metric-ton special pur- pose crane. Work on the vessel’s jacket lifting system, which will go on the Pioneering Spirit’s back deck, is also ongoing, with major fabrication contracts now awarded. Initial installa- tion activities are planned to start toward summer 2019, with the delivery and installation of the main components expected late 2019, early 2020.

Despite the torrid environment of the past three or four years,

Allseas is also continuing work on the Amazing Grace, a sin- gle-lift vessel even larger than Pioneering Spirit. “No one took us seriously [with Pioneering Spirit] until we awarded the building contract for the hull in 2010. So, when we built it, we didn’t know all of [the operator’s] plans,” explains

Heerema. “Some facilities were too long, too high or wide, so we couldn’t do them. We looked at what we would need to do all of these.” The result is Amazing Grace, which will be able to reach around any platform in the world. “The design has not been ? nalized, but we are progressing very well,” says Heer- ema.

While the 1980s song is “Fade to Grey”, Boskalis isn’t planning on fading at all, despite a rebrand to that color for all of its vessels. Boskalis has been breaking records, with the heaviest cargo record broken last year with the transport of the

P-67 ? oating production, storage and of? oading (FPSO) ves- sel aboard a semisubmersible heavy lift vessel, the Boka Van- guard (previously Dockwise Vanguard). The P-67, weighing 90,000-metric-tons, equivalent to Pioneering Spirit’s displace- ment, was transported from China to its new home offshore Brazil, where it is operating for Petrobras.

The grey paint job is aimed at bringing all Bos-