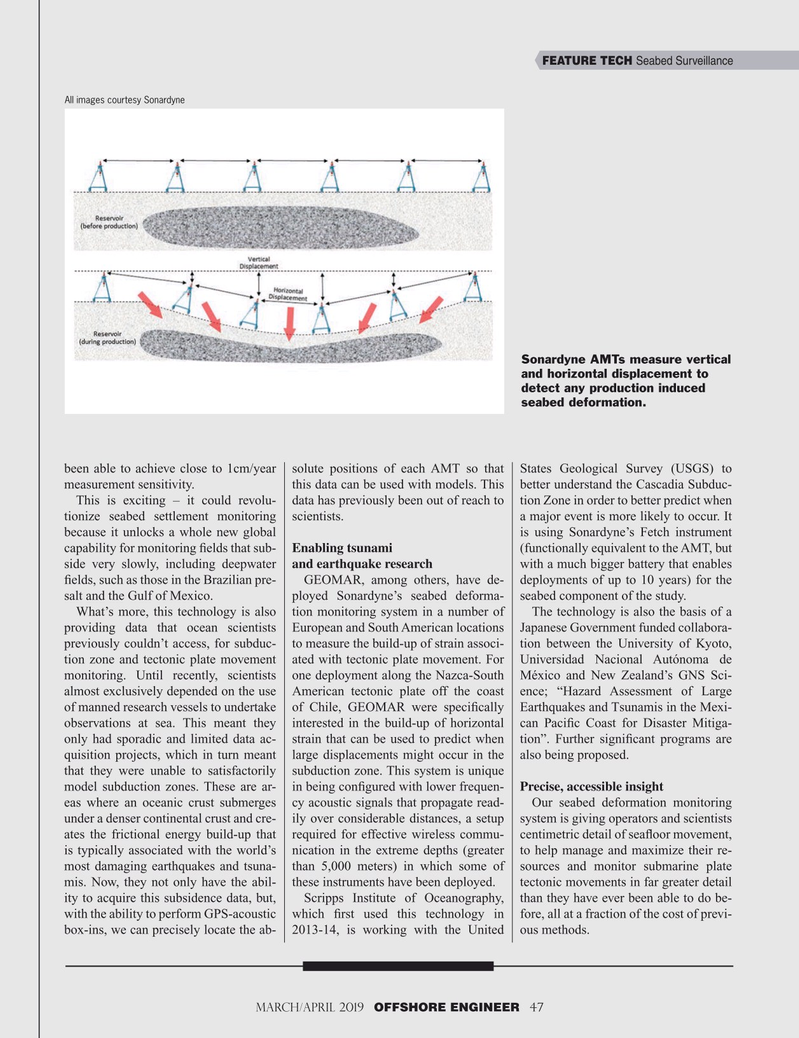 been able to achieve close to 1cm/year solute positions of each AMT so that States Geological Survey (USGS) to measurement sensitivity. this data can be used with models. This better understand the Cascadia Subduc-

This is exciting – it could revolu- data has previously been out of reach to tion Zone in order to better predict when tionize seabed settlement monitoring scientists. a major event is more likely to occur. It because it unlocks a whole new global is using Sonardyne’s Fetch instrument capability for monitoring ? elds that sub- Enabling tsunami (functionally equivalent to the AMT, but side very slowly, including deepwater and earthquake research with a much bigger battery that enables ? elds, such as those in the Brazilian pre- GEOMAR, among others, have de- deployments of up to 10 years) for the salt and the Gulf of Mexico. ployed Sonardyne’s seabed deforma- seabed component of the study.

What’s more, this technology is also tion monitoring system in a number of The technology is also the basis of a providing data that ocean scientists European and South American locations Japanese Government funded collabora- previously couldn’t access, for subduc- to measure the build-up of strain associ- tion between the University of Kyoto, tion zone and tectonic plate movement ated with tectonic plate movement. For Universidad Nacional Autónoma de monitoring. Until recently, scientists one deployment along the Nazca-South México and New Zealand’s GNS Sci- almost exclusively depended on the use American tectonic plate off the coast ence; “Hazard Assessment of Large of manned research vessels to undertake of Chile, GEOMAR were speci? cally Earthquakes and Tsunamis in the Mexi- observations at sea. This meant they interested in the build-up of horizontal can Paci? c Coast for Disaster Mitiga- only had sporadic and limited data ac- strain that can be used to predict when tion”. Further signi? cant programs are quisition projects, which in turn meant large displacements might occur in the also being proposed.

that they were unable to satisfactorily subduction zone. This system is unique model subduction zones. These are ar- in being con? gured with lower frequen- Precise, accessible insight eas where an oceanic crust submerges cy acoustic signals that propagate read- Our seabed deformation monitoring under a denser continental crust and cre- ily over considerable distances, a setup system is giving operators and scientists ates the frictional energy build-up that required for effective wireless commu- centimetric detail of sea? oor movement, is typically associated with the world’s nication in the extreme depths (greater to help manage and maximize their re- most damaging earthquakes and tsuna- than 5,000 meters) in which some of sources and monitor submarine plate mis. Now, they not only have the abil- these instruments have been deployed. tectonic movements in far greater detail ity to acquire this subsidence data, but, Scripps Institute of Oceanography, than they have ever been able to do be- with the ability to perform GPS-acoustic which ? rst used this technology in fore, all at a fraction of the cost of previ- box-ins, we can precisely locate the ab- 2013-14, is working with the United ous methods.