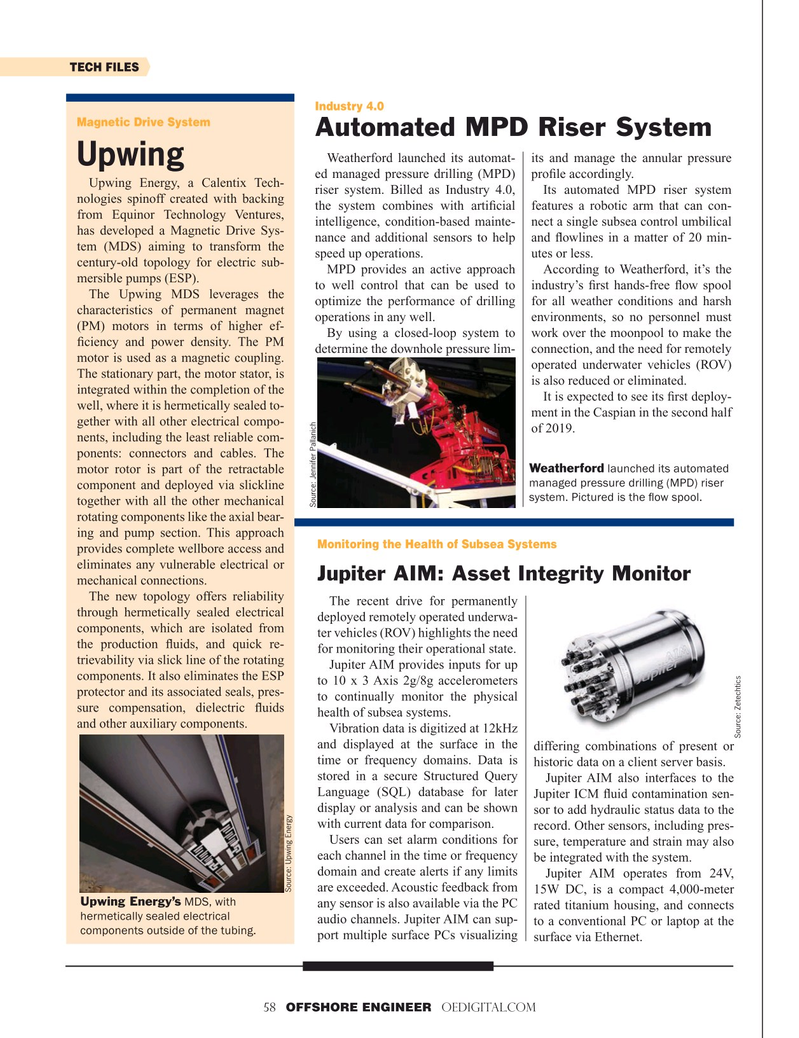 Weatherford launched its automat- its and manage the annular pressure

MPD provides an active approach According to Weatherford, it’s the mersible pumps (ESP). to well control that can be used to industry’s ? rst hands-free ? ow spool

The Upwing MDS leverages the optimize the performance of drilling for all weather conditions and harsh characteristics of permanent magnet operations in any well. environments, so no personnel must (PM) motors in terms of higher ef-

By using a closed-loop system to work over the moonpool to make the ? ciency and power density. The PM determine the downhole pressure lim- connection, and the need for remotely motor is used as a magnetic coupling. operated underwater vehicles (ROV)

The stationary part, the motor stator, is is also reduced or eliminated.

integrated within the completion of the

It is expected to see its ? rst deploy- well, where it is hermetically sealed to- ment in the Caspian in the second half gether with all other electrical compo- of 2019.

nents, including the least reliable com- ponents: connectors and cables. The

together with all the other mechanical

The recent drive for permanently through hermetically sealed electrical deployed remotely operated underwa- components, which are isolated from ter vehicles (ROV) highlights the need the production ? uids, and quick re- for monitoring their operational state. trievability via slick line of the rotating

Jupiter AIM provides inputs for up components. It also eliminates the ESP to 10 x 3 Axis 2g/8g accelerometers protector and its associated seals, pres- to continually monitor the physical sure compensation, dielectric ? uids health of subsea systems.

and other auxiliary components.

Vibration data is digitized at 12kHz

Source: Zetechtics and displayed at the surface in the differing combinations of present or time or frequency domains. Data is historic data on a client server basis.

stored in a secure Structured Query

Jupiter AIM also interfaces to the

Language (SQL) database for later Jupiter ICM ? uid contamination sen- display or analysis and can be shown sor to add hydraulic status data to the with current data for comparison.

record. Other sensors, including pres-

Users can set alarm conditions for sure, temperature and strain may also each channel in the time or frequency be integrated with the system.

domain and create alerts if any limits

Jupiter AIM operates from 24V, are exceeded. Acoustic feedback from 15W DC, is a compact 4,000-meter

Upwing Energy’s MDS, with any sensor is also available via the PC rated titanium housing, and connects hermetically sealed electrical audio channels. Jupiter AIM can sup- to a conventional PC or laptop at the components outside of the tubing. port multiple surface PCs visualizing surface via Ethernet.