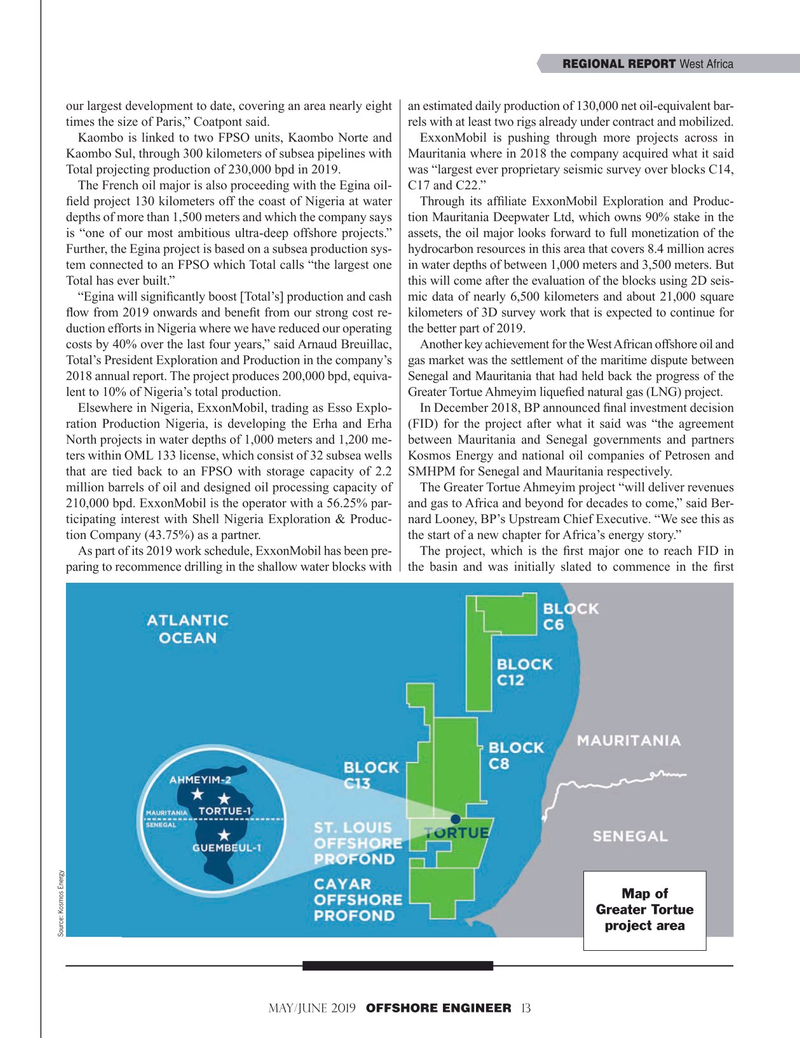 Kaombo is linked to two FPSO units, Kaombo Norte and ExxonMobil is pushing through more projects across in

Kaombo Sul, through 300 kilometers of subsea pipelines with Mauritania where in 2018 the company acquired what it said

Total projecting production of 230,000 bpd in 2019. was “largest ever proprietary seismic survey over blocks C14,

The French oil major is also proceeding with the Egina oil- C17 and C22.” ? eld project 130 kilometers off the coast of Nigeria at water Through its af? liate ExxonMobil Exploration and Produc- depths of more than 1,500 meters and which the company says tion Mauritania Deepwater Ltd, which owns 90% stake in the is “one of our most ambitious ultra-deep offshore projects.” assets, the oil major looks forward to full monetization of the

Further, the Egina project is based on a subsea production sys- hydrocarbon resources in this area that covers 8.4 million acres tem connected to an FPSO which Total calls “the largest one in water depths of between 1,000 meters and 3,500 meters. But

Total has ever built.” this will come after the evaluation of the blocks using 2D seis- “Egina will signi? cantly boost [Total’s] production and cash mic data of nearly 6,500 kilometers and about 21,000 square ? ow from 2019 onwards and bene? t from our strong cost re- kilometers of 3D survey work that is expected to continue for duction efforts in Nigeria where we have reduced our operating the better part of 2019.

costs by 40% over the last four years,” said Arnaud Breuillac, Another key achievement for the West African offshore oil and

Total’s President Exploration and Production in the company’s gas market was the settlement of the maritime dispute between 2018 annual report. The project produces 200,000 bpd, equiva- Senegal and Mauritania that had held back the progress of the lent to 10% of Nigeria’s total production. Greater Tortue Ahmeyim lique? ed natural gas (LNG) project.

Elsewhere in Nigeria, ExxonMobil, trading as Esso Explo- In December 2018, BP announced ? nal investment decision ration Production Nigeria, is developing the Erha and Erha (FID) for the project after what it said was “the agreement

North projects in water depths of 1,000 meters and 1,200 me- between Mauritania and Senegal governments and partners ters within OML 133 license, which consist of 32 subsea wells Kosmos Energy and national oil companies of Petrosen and that are tied back to an FPSO with storage capacity of 2.2 SMHPM for Senegal and Mauritania respectively.

million barrels of oil and designed oil processing capacity of The Greater Tortue Ahmeyim project “will deliver revenues 210,000 bpd. ExxonMobil is the operator with a 56.25% par- and gas to Africa and beyond for decades to come,” said Ber- ticipating interest with Shell Nigeria Exploration & Produc- nard Looney, BP’s Upstream Chief Executive. “We see this as tion Company (43.75%) as a partner. the start of a new chapter for Africa’s energy story.”

As part of its 2019 work schedule, ExxonMobil has been pre- The project, which is the ? rst major one to reach FID in paring to recommence drilling in the shallow water blocks with the basin and was initially slated to commence in the ? rst