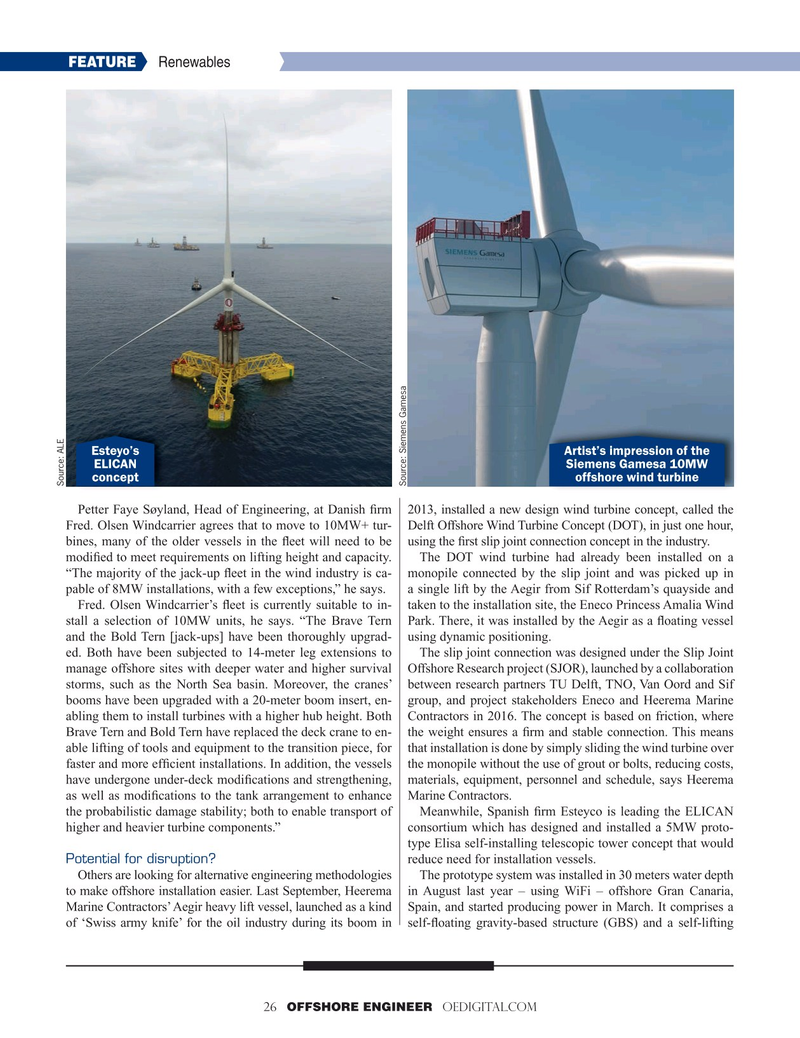 Esteyo’s Artist’s impression of the

Fred. Olsen Windcarrier agrees that to move to 10MW+ tur- Delft Offshore Wind Turbine Concept (DOT), in just one hour, bines, many of the older vessels in the ? eet will need to be using the ? rst slip joint connection concept in the industry. modi? ed to meet requirements on lifting height and capacity. The DOT wind turbine had already been installed on a “The majority of the jack-up ? eet in the wind industry is ca- monopile connected by the slip joint and was picked up in pable of 8MW installations, with a few exceptions,” he says. a single lift by the Aegir from Sif Rotterdam’s quayside and

Fred. Olsen Windcarrier’s ? eet is currently suitable to in- taken to the installation site, the Eneco Princess Amalia Wind stall a selection of 10MW units, he says. “The Brave Tern Park. There, it was installed by the Aegir as a ? oating vessel and the Bold Tern [jack-ups] have been thoroughly upgrad- using dynamic positioning. ed. Both have been subjected to 14-meter leg extensions to The slip joint connection was designed under the Slip Joint manage offshore sites with deeper water and higher survival Offshore Research project (SJOR), launched by a collaboration storms, such as the North Sea basin. Moreover, the cranes’ between research partners TU Delft, TNO, Van Oord and Sif booms have been upgraded with a 20-meter boom insert, en- group, and project stakeholders Eneco and Heerema Marine abling them to install turbines with a higher hub height. Both Contractors in 2016. The concept is based on friction, where

Brave Tern and Bold Tern have replaced the deck crane to en- the weight ensures a ? rm and stable connection. This means able lifting of tools and equipment to the transition piece, for that installation is done by simply sliding the wind turbine over faster and more ef? cient installations. In addition, the vessels the monopile without the use of grout or bolts, reducing costs, have undergone under-deck modi? cations and strengthening, materials, equipment, personnel and schedule, says Heerema as well as modi? cations to the tank arrangement to enhance Marine Contractors. the probabilistic damage stability; both to enable transport of Meanwhile, Spanish ? rm Esteyco is leading the ELICAN higher and heavier turbine components.” consortium which has designed and installed a 5MW proto- type Elisa self-installing telescopic tower concept that would

Marine Contractors’ Aegir heavy lift vessel, launched as a kind Spain, and started producing power in March. It comprises a of ‘Swiss army knife’ for the oil industry during its boom in self-? oating gravity-based structure (GBS) and a self-lifting 26 OFFSHORE ENGINEER OEDIGITAL.COM