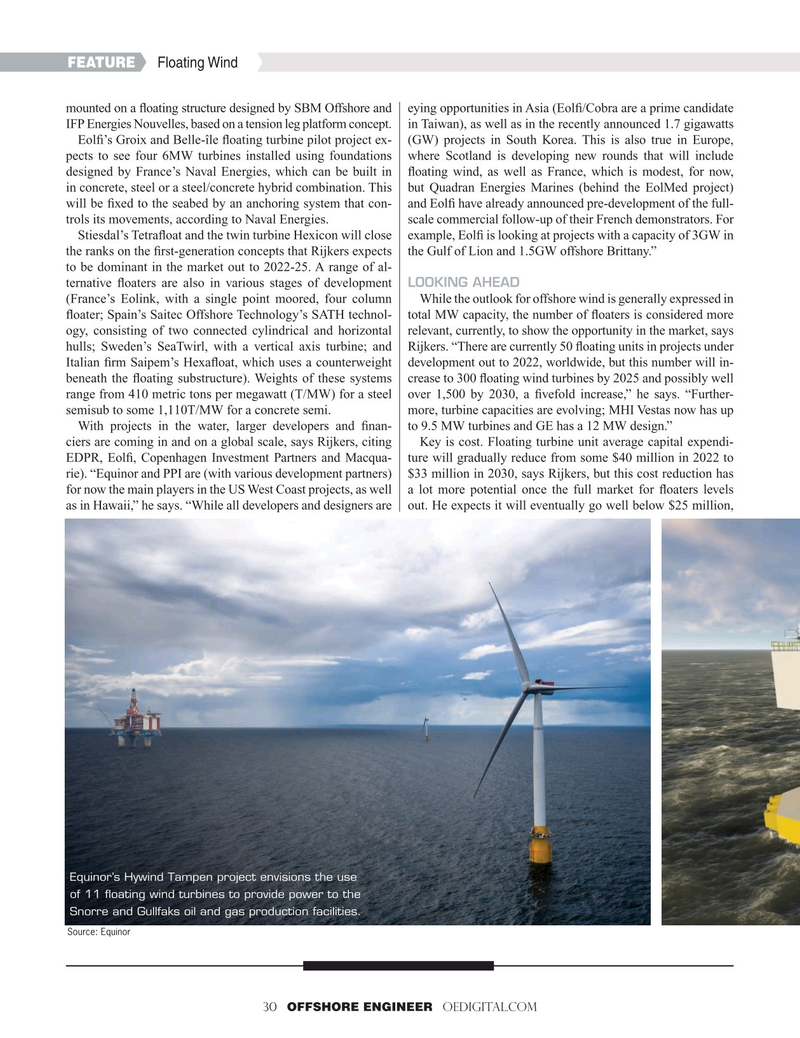 FEATURE Floating Wind mounted on a ? oating structure designed by SBM Offshore and eying opportunities in Asia (Eol? /Cobra are a prime candidate

IFP Energies Nouvelles, based on a tension leg platform concept. in Taiwan), as well as in the recently announced 1.7 gigawatts

Eol? ’s Groix and Belle-île ? oating turbine pilot project ex- (GW) projects in South Korea. This is also true in Europe, pects to see four 6MW turbines installed using foundations where Scotland is developing new rounds that will include designed by France’s Naval Energies, which can be built in ? oating wind, as well as France, which is modest, for now, in concrete, steel or a steel/concrete hybrid combination. This but Quadran Energies Marines (behind the EolMed project) will be ? xed to the seabed by an anchoring system that con- and Eol? have already announced pre-development of the full- trols its movements, according to Naval Energies. scale commercial follow-up of their French demonstrators. For

Stiesdal’s Tetra? oat and the twin turbine Hexicon will close example, Eol? is looking at projects with a capacity of 3GW in the ranks on the ? rst-generation concepts that Rijkers expects the Gulf of Lion and 1.5GW offshore Brittany.” to be dominant in the market out to 2022-25. A range of al- ternative ? oaters are also in various stages of development LOOKING AHEAD (France’s Eolink, with a single point moored, four column While the outlook for offshore wind is generally expressed in ? oater; Spain’s Saitec Offshore Technology’s SATH technol- total MW capacity, the number of ? oaters is considered more ogy, consisting of two connected cylindrical and horizontal relevant, currently, to show the opportunity in the market, says hulls; Sweden’s SeaTwirl, with a vertical axis turbine; and Rijkers. “There are currently 50 ? oating units in projects under

Italian ? rm Saipem’s Hexa? oat, which uses a counterweight development out to 2022, worldwide, but this number will in- beneath the ? oating substructure). Weights of these systems crease to 300 ? oating wind turbines by 2025 and possibly well range from 410 metric tons per megawatt (T/MW) for a steel over 1,500 by 2030, a ? vefold increase,” he says. “Further- semisub to some 1,110T/MW for a concrete semi. more, turbine capacities are evolving; MHI Vestas now has up

With projects in the water, larger developers and ? nan- to 9.5 MW turbines and GE has a 12 MW design.” ciers are coming in and on a global scale, says Rijkers, citing Key is cost. Floating turbine unit average capital expendi-

EDPR, Eol? , Copenhagen Investment Partners and Macqua- ture will gradually reduce from some $40 million in 2022 to rie). “Equinor and PPI are (with various development partners) $33 million in 2030, says Rijkers, but this cost reduction has for now the main players in the US West Coast projects, as well a lot more potential once the full market for ? oaters levels as in Hawaii,” he says. “While all developers and designers are out. He expects it will eventually go well below $25 million,