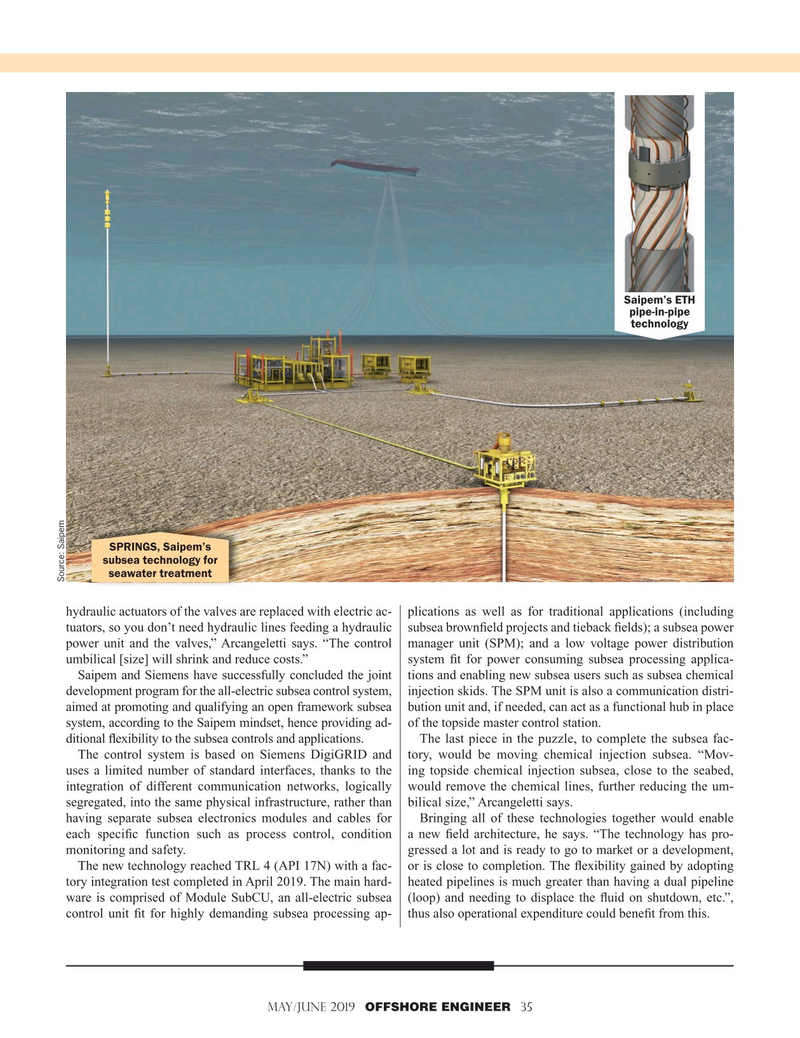 Saipem and Siemens have successfully concluded the joint tions and enabling new subsea users such as subsea chemical development program for the all-electric subsea control system, injection skids. The SPM unit is also a communication distri- aimed at promoting and qualifying an open framework subsea bution unit and, if needed, can act as a functional hub in place system, according to the Saipem mindset, hence providing ad- of the topside master control station.

ditional ? exibility to the subsea controls and applications. The last piece in the puzzle, to complete the subsea fac-

The control system is based on Siemens DigiGRID and tory, would be moving chemical injection subsea. “Mov- uses a limited number of standard interfaces, thanks to the ing topside chemical injection subsea, close to the seabed, integration of different communication networks, logically would remove the chemical lines, further reducing the um- segregated, into the same physical infrastructure, rather than bilical size,” Arcangeletti says. having separate subsea electronics modules and cables for Bringing all of these technologies together would enable each speci? c function such as process control, condition a new ? eld architecture, he says. “The technology has pro- monitoring and safety. gressed a lot and is ready to go to market or a development,

The new technology reached TRL 4 (API 17N) with a fac- or is close to completion. The ? exibility gained by adopting tory integration test completed in April 2019. The main hard- heated pipelines is much greater than having a dual pipeline ware is comprised of Module SubCU, an all-electric subsea (loop) and needing to displace the ? uid on shutdown, etc.”, control unit ? t for highly demanding subsea processing ap- thus also operational expenditure could bene? t from this.