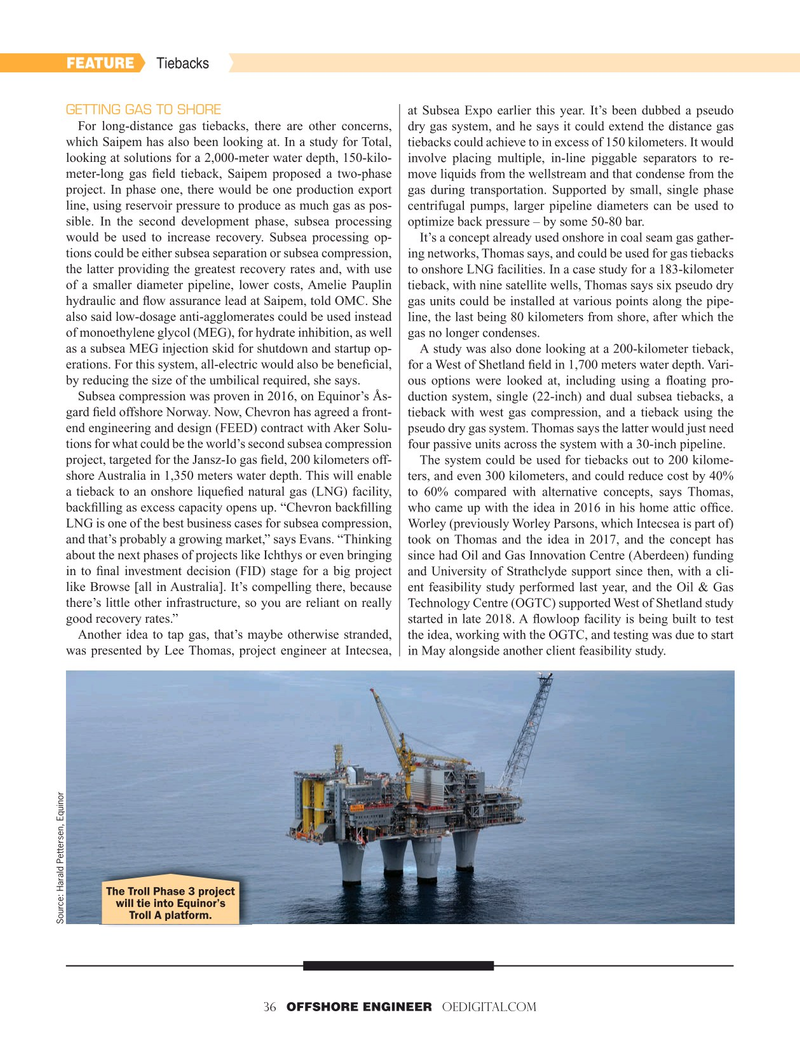 GETTING GAS TO SHORE at Subsea Expo earlier this year. It’s been dubbed a pseudo

For long-distance gas tiebacks, there are other concerns, dry gas system, and he says it could extend the distance gas which Saipem has also been looking at. In a study for Total, tiebacks could achieve to in excess of 150 kilometers. It would looking at solutions for a 2,000-meter water depth, 150-kilo- involve placing multiple, in-line piggable separators to re- meter-long gas ? eld tieback, Saipem proposed a two-phase move liquids from the wellstream and that condense from the project. In phase one, there would be one production export gas during transportation. Supported by small, single phase line, using reservoir pressure to produce as much gas as pos- centrifugal pumps, larger pipeline diameters can be used to sible. In the second development phase, subsea processing optimize back pressure – by some 50-80 bar.

would be used to increase recovery. Subsea processing op- It’s a concept already used onshore in coal seam gas gather- tions could be either subsea separation or subsea compression, ing networks, Thomas says, and could be used for gas tiebacks the latter providing the greatest recovery rates and, with use to onshore LNG facilities. In a case study for a 183-kilometer of a smaller diameter pipeline, lower costs, Amelie Pauplin tieback, with nine satellite wells, Thomas says six pseudo dry hydraulic and ? ow assurance lead at Saipem, told OMC. She gas units could be installed at various points along the pipe- also said low-dosage anti-agglomerates could be used instead line, the last being 80 kilometers from shore, after which the of monoethylene glycol (MEG), for hydrate inhibition, as well gas no longer condenses. as a subsea MEG injection skid for shutdown and startup op- A study was also done looking at a 200-kilometer tieback, erations. For this system, all-electric would also be bene? cial, for a West of Shetland ? eld in 1,700 meters water depth. Vari- by reducing the size of the umbilical required, she says. ous options were looked at, including using a ? oating pro-

Subsea compression was proven in 2016, on Equinor’s Ås- duction system, single (22-inch) and dual subsea tiebacks, a gard ? eld offshore Norway. Now, Chevron has agreed a front- tieback with west gas compression, and a tieback using the end engineering and design (FEED) contract with Aker Solu- pseudo dry gas system. Thomas says the latter would just need tions for what could be the world’s second subsea compression four passive units across the system with a 30-inch pipeline. project, targeted for the Jansz-Io gas ? eld, 200 kilometers off- The system could be used for tiebacks out to 200 kilome- shore Australia in 1,350 meters water depth. This will enable ters, and even 300 kilometers, and could reduce cost by 40% a tieback to an onshore lique? ed natural gas (LNG) facility, to 60% compared with alternative concepts, says Thomas, back? lling as excess capacity opens up. “Chevron back? lling who came up with the idea in 2016 in his home attic of? ce.

LNG is one of the best business cases for subsea compression, Worley (previously Worley Parsons, which Intecsea is part of) and that’s probably a growing market,” says Evans. “Thinking took on Thomas and the idea in 2017, and the concept has about the next phases of projects like Ichthys or even bringing since had Oil and Gas Innovation Centre (Aberdeen) funding in to ? nal investment decision (FID) stage for a big project and University of Strathclyde support since then, with a cli- like Browse [all in Australia]. It’s compelling there, because ent feasibility study performed last year, and the Oil & Gas there’s little other infrastructure, so you are reliant on really Technology Centre (OGTC) supported West of Shetland study good recovery rates.” started in late 2018. A ? owloop facility is being built to test

Another idea to tap gas, that’s maybe otherwise stranded, the idea, working with the OGTC, and testing was due to start was presented by Lee Thomas, project engineer at Intecsea, in May alongside another client feasibility study.

The Troll Phase 3 project will tie into Equinor’s